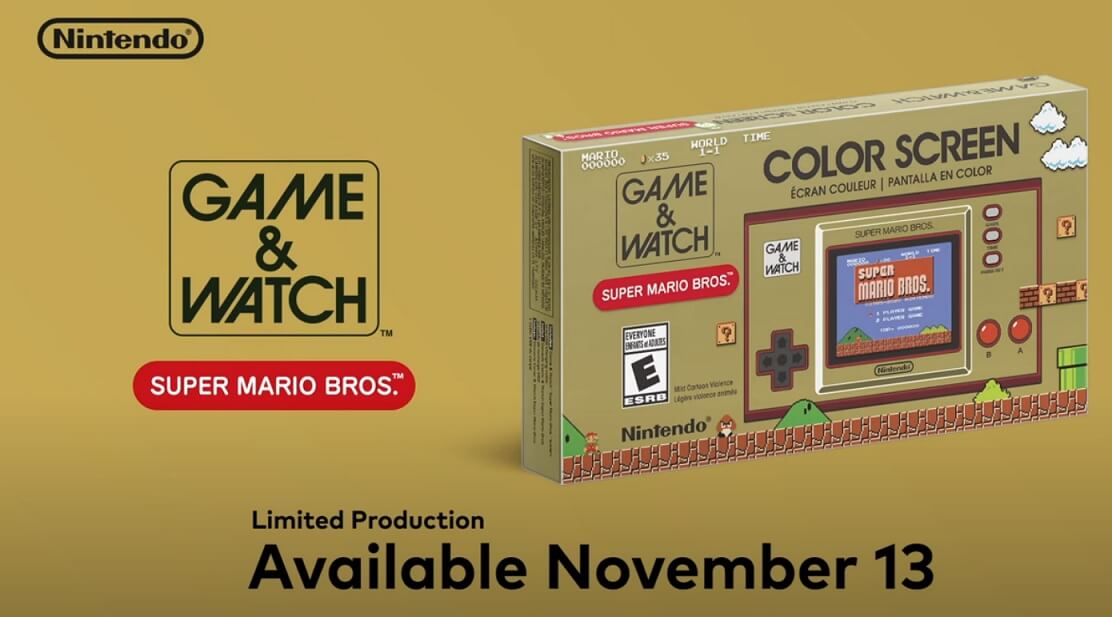 After months of speculation and the growing impatience of players, today saw Nintendo finally unveil their plans to celebrate the 35th anniversary of the original Super Mario Bros. It was all announced in a Nintendo Direct that ewas surprised released on Nintendo’s official YouTube channel, where several classic Super Mario games were announced to be coming to Switch.

We’ll include the full Nintendo Direct video at the bottom of this blog post. But if you’re someone who just wants to know the headlines as fast as possible, you’ll find it in our quick round-up of every announcement made in the list below:

Nintendo opened the Direct with the reveal that the Game & Watch (Nintendo’s original handheld system) would be getting a re-release this November 13th. The console looks much the same as the original system, though it now comes with lots of Mario goodness pre-built in – including Super Mario: The Lost Levels. They will be available in limited supply, so be weary of when pre-orders go live.

The Nintendo Switch has pretty much been a Wii U port machine as of late, with everything from New Super Mario Bros. Deluxe to Mario Kart 8: Deluxe eventually finding their way over. This trend looks to continue this December as Super Mario 3D World officially brings its multiplayer mayhem to Switch on 2nd December. Better still, it’ll include a spooky-looking new expansion called Bowser’s Fury. Consider us excited.

Because Mario is yet to tackle all genres, the Direct revealed that Mario would be getting his very own Battle Royale style game called Super Mario Bros. 35th, which pits 35 players against one another in a bid to see who can survive the longest. Super Mario Bros. 35 is exclusive to Nintendo Switch online members and is coming on 1st October 2020.

It might not quite have been DLC for Mario Kart 8 Deluxe, but a short trailer showcased a new AR game for the Nintendo Switch that enables players to race around their home. It’s called Mario Kart Live Home Circuit and will release on October 16th. If you’ve ever wanted to experience any of the Mushroom Kingdom’s tracks from the view of Mario’s cockpit, this is for you.

Super Mario 3D All Stars bundles 64, Sunshine and Galaxy into one package

It’s what we’ve all been waiting for. Nintendo also announced that a trio of 3D Mario titles would be coming to Nintendo Switch extremely soon on September 18th. Known officially as Super Mario 3D All Stars, it collects Super Mario 64, Super Mario Sunshine and the original Super Mario galaxy into one package, fully remastered and upscaled for Nintendo Switch.