At GamingDeals.com, our mission is to help you find your perfect gaming deal. We’ve spent years perfecting our system of finding the best prices quickly and accurately so you never need miss out on a great offer.

However, we also need to make sure GamingDeals.com makes money, to keep the site up and running, reward our hard-working team and pay other costs that come with running a technically complex site like ours.

So how do you make money?

We don’t believe in charging a subscription cost to use our services; nor do we offer out advertising space on the site, except to retail partners of ours who want to promote a specific deal or offer.

Instead, what we do is operate what’s known as an affiliate model. We have relationships with all the retailers you see listed on Gaming Deals, established through a number of different affiliate networks. These networks provide a framework through which we can track users who click on a deal.

Not every retailer we work with is part of this arrangement. We try to give our visitors as much choice as possible, even if it sometimes means publicising deals and retailers which don’t bring us any commission.

When you click on one of our deal links, your browser will pick up what's called a cookie (for a more detailed explanation of cookies, check out our cookies policy page). This is a tiny file that just lets the retailer know you’ve come from GamingDeals.com if you end up buying something from them.

If you do buy something from the retailer, that information is then fed back to the network, which calculates a small commission fee to be paid to Gaming Deals by the retailer.

How much does Gaming Deals make?

The amount we make on each transaction varies based on the value of what was bought and the commission rate we have agreed with the retailer. Typically, these rates range from 1 to 2.5%, meaning a £300 purchase will generally earn us £3 to £7.50.

Does this cost me anything extra?

Absolutely not. The prices you see listed on Gaming Deals are the lowest possible - there’s no price markup due to buying through us.

Can you see details about me?

Nope. Although you’ll naturally have to let retailers know your address and payment details when purchasing, none of this information is ever shared with us. Nor is anything like your email address, so you don’t need to worry about receiving newsletters from us if you’ve not specifically signed up for them.

Can I opt out of being tracked?

Yes. Once we’ve set a cookie file, we’re not able to remove it from your browser, but it’s a simple process to remove them yourself. Head over to our cookie policy page for details on deleting cookies set by GamingDeals.com.

What happens if I only decide to buy a deal a few days after seeing it on GamingDeals.com?

If you clicked through to the retailer you end up buying from, the cookie set will likely still be there, meaning we’ll still receive a commission for a sale.

What if I end up buying a different product from the retailer than the one I originally clicked on on GamingDeals.com?

The cookies used apply across a retailer’s entire range, so even if you don’t buy what you originally clicked on and choose something else instead, we’ll still get a commission.

Though we work hard to try and avoid ad blockers stopping the process of adding a cookie to your browser, we may struggle to do this with certain deals and retailers. If you're a regular visitor to Gaming Deals and want to help us, we'd be hugely appreciative of you turning off or pausing your blocker for our site!

How are banners selected?

Occasionally, you'll see advertisement banners on the Gaming Deals homepage and deal comparison pages. These banners are paid for by our retailer partners, either with a flat fee or by a change in our commission structure for the duration of the banner promotion.

How are featured deals selected?

You may have noticed that, when comparing certain products on GamingDeals.com, some deals will be highlighted as special or 'featured' deals, such as in the example below: 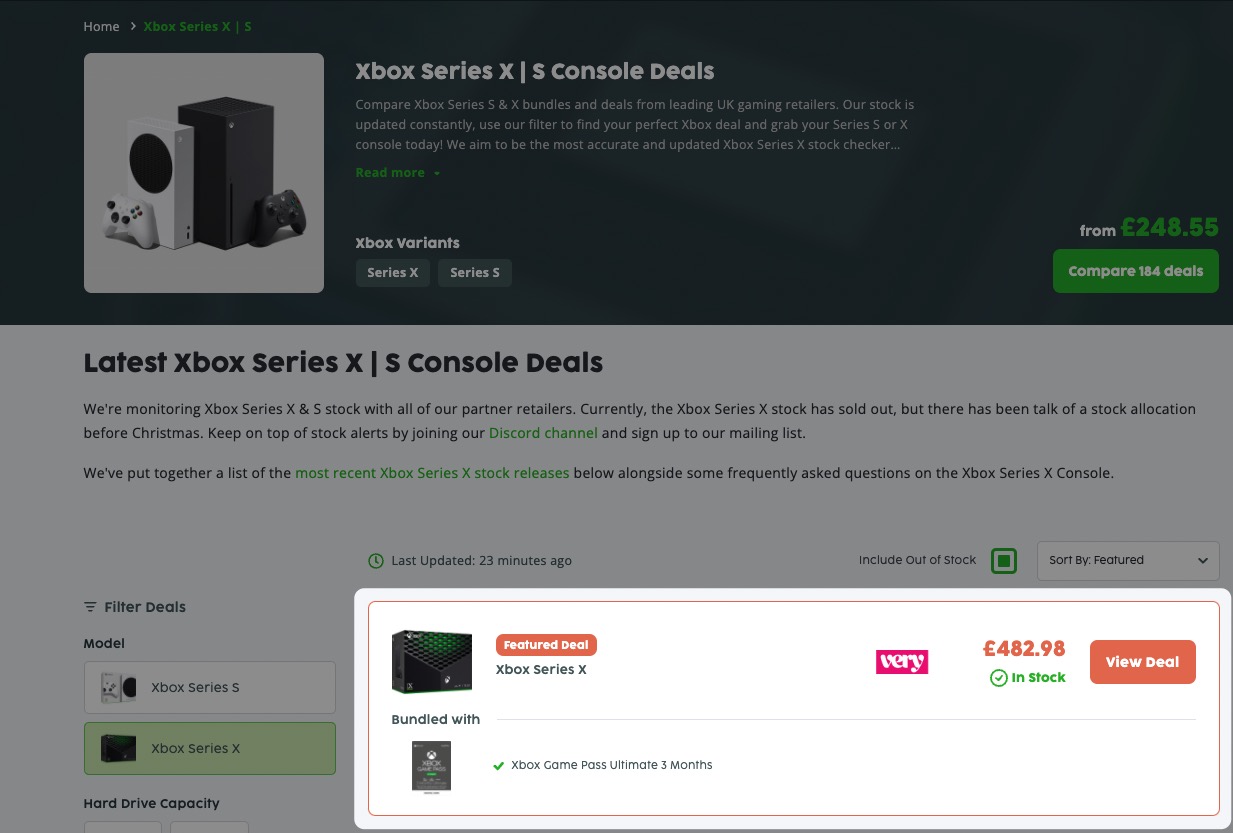 Because they're more prominent, these deals typically get more attention than deals we haven't chosen as featured deals.

So how do you pick featured deals?

The vast majority of featured deals we pick are based purely on the strength of the deals in question. We aim to promote a range of deals that cover different price points, models and generally give people a quick idea - at a glance - what sort of deals are out there.

Are they chosen manually, or is there an algorithm picking them?

Every featured deal is picked manually by the GamingDeals.com team. We pay close attention to which deals are capturing our audience's attention and respond accordingly. Equally, if a deal we highlighted as a featured deal isn't proving as popular as we thought it would, we will swap it for something else.

Are the featured deals completely organic?

For the majority of the time, the mega deals are chosen entirely at our discretion - we have no set number to highlight, and we do not consider the amount of commission we'll receive by promoting one deal versus another; we just want to present the best deals.

Occasionally, we will work with a specific retailer on a promotional basis, which sometimes includes guaranteeing featured deal placements. In these cases, we retain editorial control of what deals we promote, so as to ensure that we still only promote offers that offer genuine value to users.

Occasionally, while browsing Gaming Deals, you'll see some additional advertising modules that take two forms: One is a carousel of products from different websites, while the other are images advertising other websites. Both of these types of advertisements are powered by Google, as part of their Adsense programme.

In both cases, we are paid a small fee by Google from each click generated by Gaming Deals on these advertisements. We received no remuneration or commission based on what, if any, actions a user takes once they've clicked on one of the adverts.

We also do not influence what is shown on the adverts. The product listing carousels respond directly to what page they're listed on, so will show relevant adverts, but beyond that the products shown are dictated by Google's internal algorithms and bid auction system. The display adverts are based upon your personal browsing habits.

Though we are not able to control the products shown in the carousel, we are able to blacklist certain websites from showing display adverts. If you are served an advert from a website you feel to be inappropriate, please get in touch with us (ideally with a screenshot of the offending advert) and we will investigate whether the advertisement should be blacklisted.

It is also worth noting that the adverts in no way influence which retailers are promoted on Gaming Deals or the content we publish.