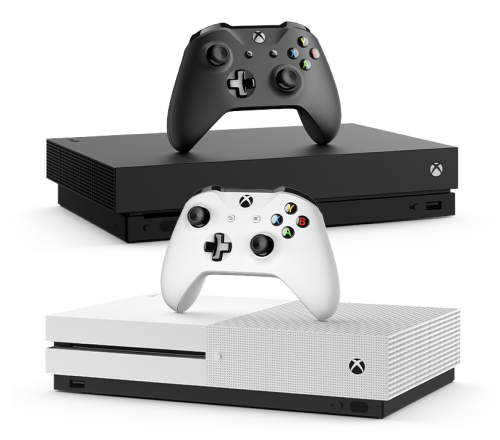 Compare over 0 Xbox One deals from 0 gaming retailers, with prices starting from just £0.00 to £0.00. Our easy filtering system allows you to find the perfect Xbox One bundle with the Xbox games you prefer. Buy your Xbox One console today. Looking for the latest Xbox consoles? Check out our price comparisons for the Xbox Series X and Xbox Series S.

Compare Xbox One bundles and prices

Don't forget to use our handy filtering system to help find your ideal Xbox One bundle.

Below our the current most popular Xbox One bundles, choose your preferred bundle or compare all Xbox One deals

Learn more about the Xbox One

The Xbox One may be almost 10 years old now, but it’s still massively popular for those who haven't got their hands on the Xbox Series X or Series S yet. This is thanks to the number of models, bundles, games and great innovations that have come along since Microsoft launched it back in 2013. Want to know what makes this console so special, and the differences between the various models? Read on.

Since the launch of the Xbox Series X and Series S, most Xbox One models have been discontinued, and therefore are getting harder to find. By the end of the generation, there were three versions of Xbox One to choose from. The Xbox One S was the all-singing, all-dancing middle of the road option, capable of playing great games, ultra HD blu rays and more. The Xbox One X was for the hardcore gamer, and was the most powerful home console ever released. Finally, the last addition to the family was the Xbox One S All-Digital, a budget option that helped gamers save by doing away with the disc drive and relying entirely on digital downloads and streaming play. The All-Digital was the cheapest main console on the market.

Xbox Live revolutionised the way the world saw online gaming. Then Microsoft changed the game again, with Game Pass. This Netflix-style subscription grants users instant access to an incredible library of games, available to enjoy via the cloud for a monthly fee. Game Pass has proved an enormous success since its launch, and is going from strength to strength as its library expands. It’s also a critical element of the Xbox S All-Digital console, which relies on streaming and downloads, rather than a disc drive to operate.

The best of third party, plus incredible exclusives

There’s no better console to play third party games such as Star Wars: Jedi Fallen Order, FIFA 22 and Call of Duty than the super powerful Xbox One X, but Xbox One offers so much more. Games like Sea of Thieves, Forza Horizon, Gears 5 and more are all exclusively available for Xbox. If you’re looking for the cheapest way to enjoy some of these third party hits, then the S-All Digital Edition of the console is typically the most budget-friendly way of doing so.

The Xbox One controller has been hailed as one of the best of its generation. However, if you want to take your gaming to the next level, the Elite controller offers customisation beyond your wildest dreams. There are two versions of the Elite, the original and the Series 2. The Xbox Design Lab enables you to create your very own dream controller design, while the Adaptive Controller empowers gamers with limited mobility to enjoy the Xbox One’s vast library of games.

The current best Xbox One deals

Both the Xbox Series X and Series S are finally with us, ushering in the next gen of console gaming and meaning that the Xbox One is officially no longer Microsoft's flagship console. However, Microsoft are determined to embrace every aspect of the Xbox ecosystem. There’s plenty of reasons to still look at getting at Xbox One, One S, One X or One S All-Digital. We’re still listing every console bundle we find with the Xbox One from all the UK’s leading retailers while we still can.

Stock levels are extremely limited on the Xbox One currently, and we're not expecting much in the way of new stock as availability of the Xbox Series S and X improves, but there may still be some good bargains - we'd just recommend being quick if you do see an offer for a good price!

Choose your Xbox One bundle

We compare hundreds of deals to give you the best comparison when it comes to choosing an Xbox One bundle. But with three different consoles and a huge selection of bundled items available, getting the right bundle when buying an Xbox One can be tricky. These are our tips for finding the bundle that’s right for you:

One S, X or S All-Digital

The three Xbox One models all offered something different. The S All-Digital was the best for those on a budget, but didn't come with a disc drive, meaning you weren’t be able to play any physical games. The One S was the best all-rounder. The One X was the best console and can play games in 4K at 60 FPS, but it’s also markedly more expensive.

We do our best to find every Xbox bundle that we can, so you’ve got the pick of the games to choose from. Some, like Gears 5 and Star Wars: Jedi Fallen Order, have their own bundle, and come packaged in the box as a digital download, while others are physical copies.

One controller or two?

One of the most successful Xbox bundles has been the official two controller bundle, with plenty of you wanting to share the fun of the Xbox One. Retailers have started putting extra controllers into a lot of bundles themselves, and it’s often more economical to buy a second controller this way than at a later date.

With Microsoft’s Game Pass, there’s no need to commit to buying a game while worrying you might not like it any more. Instead, you can simply pick up a Game Pass subscription, which works in a similar manner to Netflix or Spotify and gives you access to a huge library of games for a low monthly cost. Perfect for those who like to hop from game to game!