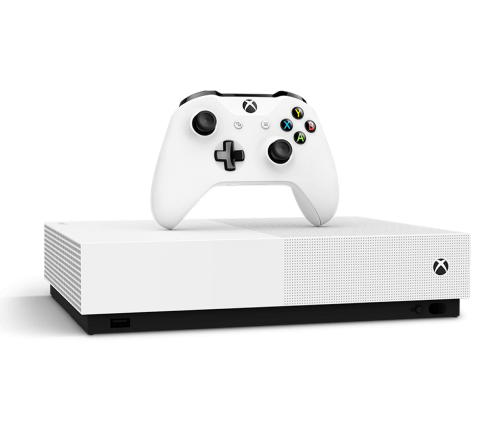 Don't forget to use our handy filtering system to help find your ideal Xbox One S All-Digital bundle.

What is the Xbox One S All-Digital Edition?

Released on 7th May 2019, the Xbox One S All-Digital Edition represented Microsoft’s concerted effort to aid Xbox players looking to migrate their game library to be fully digital. It updated the existing Xbox One S model design by completely removing the optical disc drive, coming packaged with three games right from the off as download codes: Sea of Thieves, Forza Horizon 3 and Minecraft. Combine this disc-less Xbox One with the miracle of Xbox Game Pass and players have all they need to continue their console career well into the future.
Since the launch of the Xbox Series X and Series S, it has since been discontinued. However, for the right person at the right price, it can still be a great choice.

Xbox Game Pass is an all-encompassing streaming-based subscription service that allows every Xbox player to save money while maintaining access to over 100 exciting titles. It costs just £7.99 per month in the UK and it isn’t anything like what’s available on other platforms, perfectly suiting the Xbox One S All-Digital Edition’s ethos of doing away with physical media. As well as an ever-rotating range of popular releases added to its line-up, the Xbox Game Pass also affords subscribers day one access to first-party exclusives like Halo Infinite, Forza Horizon, and others.

Since the early days of Xbox 360, Microsoft’s online eco-system (known as Xbox Live) has continually proved itself to be one of the best multiplayer game platforms out there. It’s what allows Xbox One players to purchase digital releases, receive exclusive discounts and jump into any game’s respective multiplayer mode with ease. In addition to these online benefits, Xbox Live subscribers gain access to four free games per month. With an Xbox One S All-Digital Edition console, this is almost a necessity.

Blockbuster titles exclusive to Xbox One

Any console is only as good as its exclusives, and thankfully, Xbox One has its fair share of blockbuster titles and franchises that can’t be played anywhere else. Chief amongst them is the celebrated Halo series, centring on Master Chief’s mission to rid the galaxy of the evil Covenant threat. Every mainline Halo game is playable on Xbox One via the Master Chief Collection, and Halo Infinite as the latest entry into the series doesn’t disappoint either. Forza Horizon and Gears of War are all celebrated franchises exclusive to Xbox, as well – all unavailable on other consoles.

Xbox One is arguably the only current-gen console doing backwards compatibility correctly. In addition to a swathe of fresh titles developed for Xbox One, the bigwigs over at Microsoft have worked out how to provide players access to various games from Xbox’s history. That means games released on previous platforms – the Xbox 360 and original Xbox console – can still be purchased and played right there on the new Xbox One S All-Digital Edition.

The Xbox One S All-Digital Edition was a special case in that it was one of the very few consoles where the only way to purchase it is with three games included. Sea of Thieves, Minecraft and Forza Horizon 3 are all first-party Xbox One exclusives that showcase the best of what Microsoft’s platform is capable of, available right out of the box as a download code for Xbox One S All-Digital Edition purchasers.

This is no doubt a gesture of good will on Microsoft’s part, assuring that anyone who picks up an Xbox One S All-Digital Edition console has a variety of games to try out regardless of if they’re a subscriber to Xbox Game Pass or Xbox Live. All three games are required to be downloaded and installed natively on the console – further reinforcing one of the most vital aspects of this hardware revision: an internet connection wasn't optional.

All-Digital Edition vs original One S?

Microsoft’s All-Digital console was the same size and spec as the standard Xbox One S except it doesn’t feature an optical disc drive.

How much does the All-Digital Edition cost?

The console had an RRP of £199.99, but this also included three games in addition to the console itself.

What hard drive does the Xbox One S All-Digital Edition have?

Being a console specifically designed to work solely with downloadable games, the Xbox One S All-Digital Edition was only available with a 1TB hard drive. However it did function with additional external hard drives.

Is there a way to play the existing Xbox One game discs you own?

No. The Xbox One S All-Digital Edition lacked a disc drive. There’s no way to swap any games you own on disc to a digital version.

Other Xbox One consoles you may wish to consider

If you're not convinced the Xbox One S All-Digital edition is the one for you, perhaps because you're keen to continue playing games with physical discs, then you have other Microsoft consoles to consider.

Not including Microsoft's latest consoles; the Xbox Series X and Series S, the Xbox One S offers you the same technical specs as the All-Digital edition but you get the added bonus of a disc drive. For the pro gamer, the Xbox One X console was the weapon of choice, with better hardware packed into the box, giving you a better gaming experience.