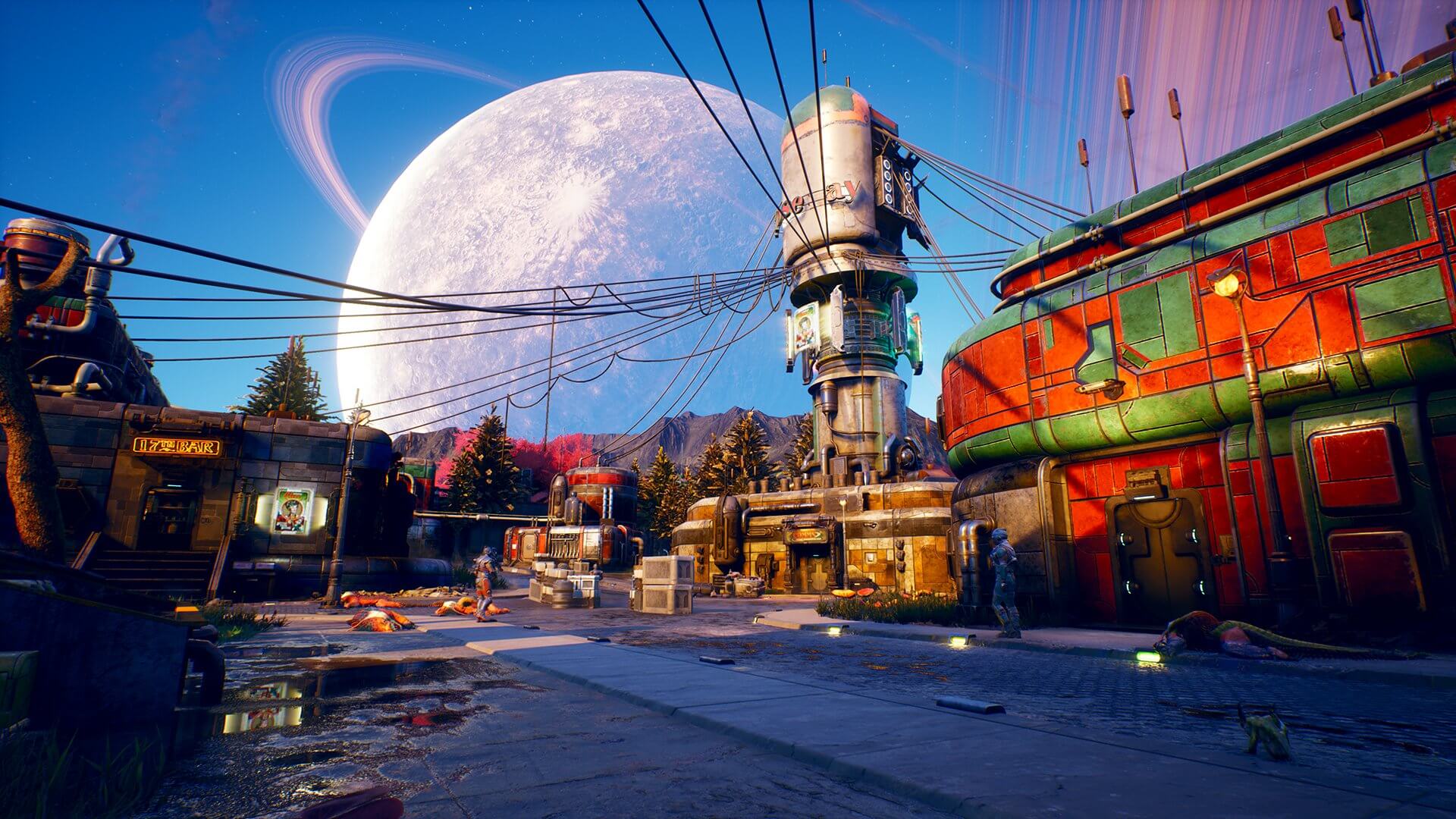 Playing through The Outer Worlds is like finally scratching an itch you never knew existed before. A Fallout-esque RPG from the series’ original creators? A totally new IP set in a wacky space universe? Better yet, there’s not one element of online connection or any micro-transactions required? An RPG filled with such personality that also doubles down on so many old-school genre sensibilities almost seems too good to be true in today’s gaming landscape. And while The Outer Worlds may have already released late last year on other platforms, this zany journey into the intergalactic expanse is still a blast on Nintendo Switch – providing you can stomach some drastic visual concessions.

The Outer Worlds begins – quite literally – with a crash, bang and a wallop. After a brief stint creating your custom character and a meeting of sorts with your maker, you unexpectantly crash down on the planet of Terra 2 where adventure awaits. It isn’t long, however, before you realise that this is not a persistent open world in the traditional sense, but rather a tutorial hub area designed to educate you on the game’s many gameplay systems and quirks. Your first main questline to route power back to the citizens of Edgewater does this brilliantly, and before long your using your character’s dialogue skills to negotiate terms, buddying up with charismatic companions and making choices that affect the world and people around you.

The latter is a trait synonymous with some of the best Western RPGs ever made, and luckily Obsidian Entertainment gets to utilise is experience developing the likes of Knights of the Old Republic II and Fallout: New Vegas to great effect. The Outer Worlds might not be as sprawling as either of those games, but what it lacks in quantity it more than makes up for in quality. You can feel satirical capitalism bleeding out of every aspect of the star-studded Halcyon system, whether it’s in the way certain NPCs will repeatedly recite corporate slogans or how your main point of trade is a glitzy vending machine. Such satire in games is tricky to pull off anyway, but The Outer Worlds’ dark sense of humour rides the line perfectly. 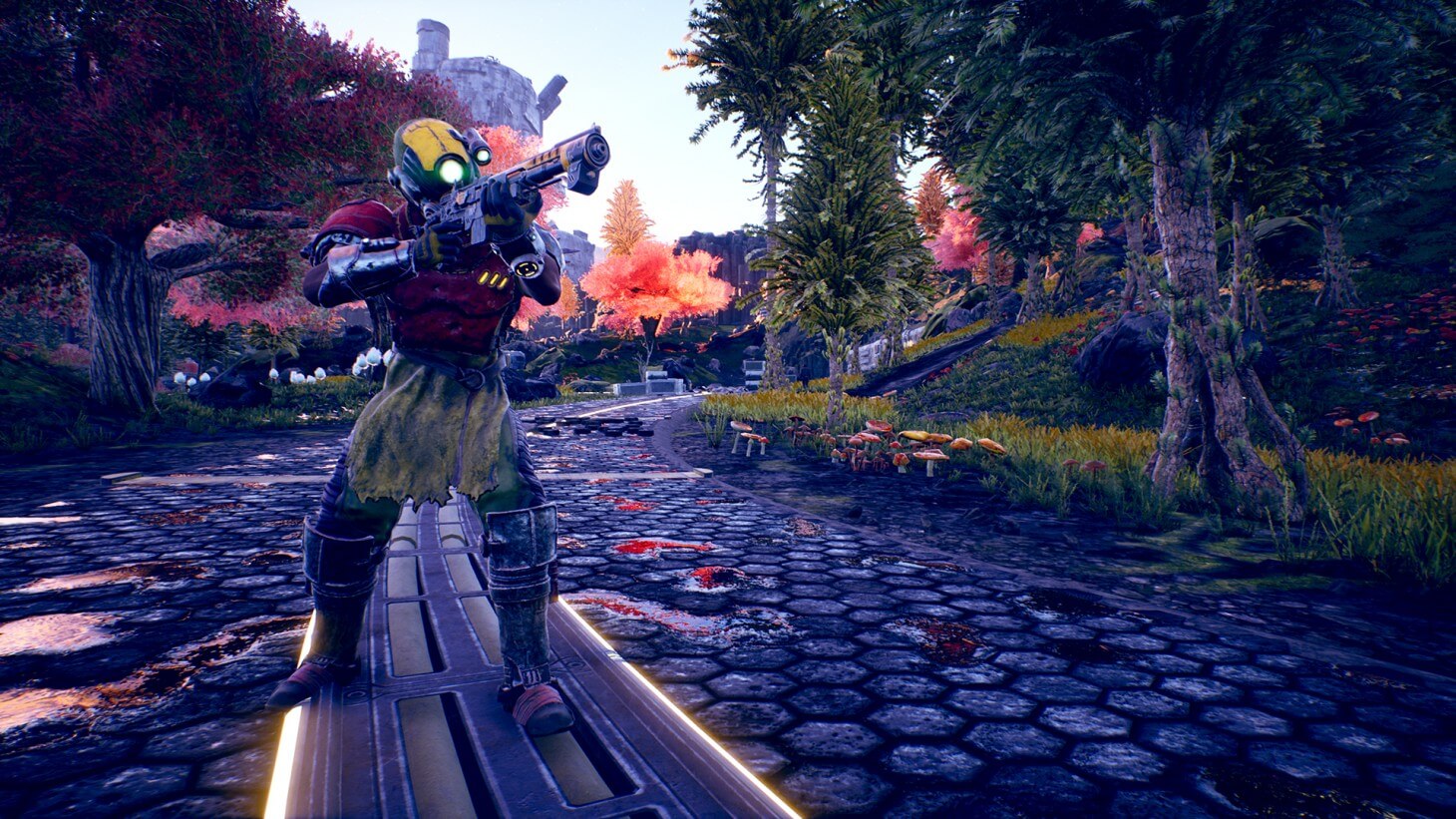 In terms of the game’s basic flow, those familiar with Fallout will have some idea what to expect. You’ll explore various varied regions, taking on quests that force you to make hard decisions while continually upgrading and enhancing your character with better traits. You may choose to build yours as an aggressive type, pouring points into ranged and melee weapon proficiencies each time you level up to make yourself a tank in battle. Alternatively, though, you might wish to play it tactically, improving your hacking and leadership skills so you can approach tense situations with a softer touch.

The Outer Worlds is a highly flexible roleplaying experience in this way, boasting a set-up that works great for repeat playthroughs. Missions and questlines might always stay the same, sure, but almost all of them feature multiple pathways that lead to different outcomes worth seeing. The game itself is surprisingly conservative for an RPG at around 15 hours. So, if you do want more bang for your buck, there are plenty of reasons to return using a different character build.

Speaking of which, and the roster of companions able to join you really is one of the best things The Outer Worlds has going for it. There are six in total available to recruit, with most dished out relatively early to you in the campaign. Each of them boast their own area of expertise that comes in handy when you need to buff your own stats. Vicar Max, for example, is one of the first people you meet and an expert hacker that makes it easier to tackle blocked-off passageways and read protected terminals. Then you have someone like the hulk-busting SAM, who is a modified cleaning mech that works well when wanting to take enemies out from afar.

Imbuing each companion with a distinct personality would have been enough to make having them tag along with you worthwhile, but the fact that all can bolster your capabilities in this way is much appreciated. Improved again by every companion having a combat ability that will trigger a cinematic manoeuvre during tough skirmishes. Up to two can join you at any one time. And if you complete their dedicated questline, this combat ability will be buffed again to make them more dominant in enemy battles. In terms of your character, slowing down time temporarily to target specific body parts helps take the edge off The Outer Worlds’ fairly ho-hum gunplay. 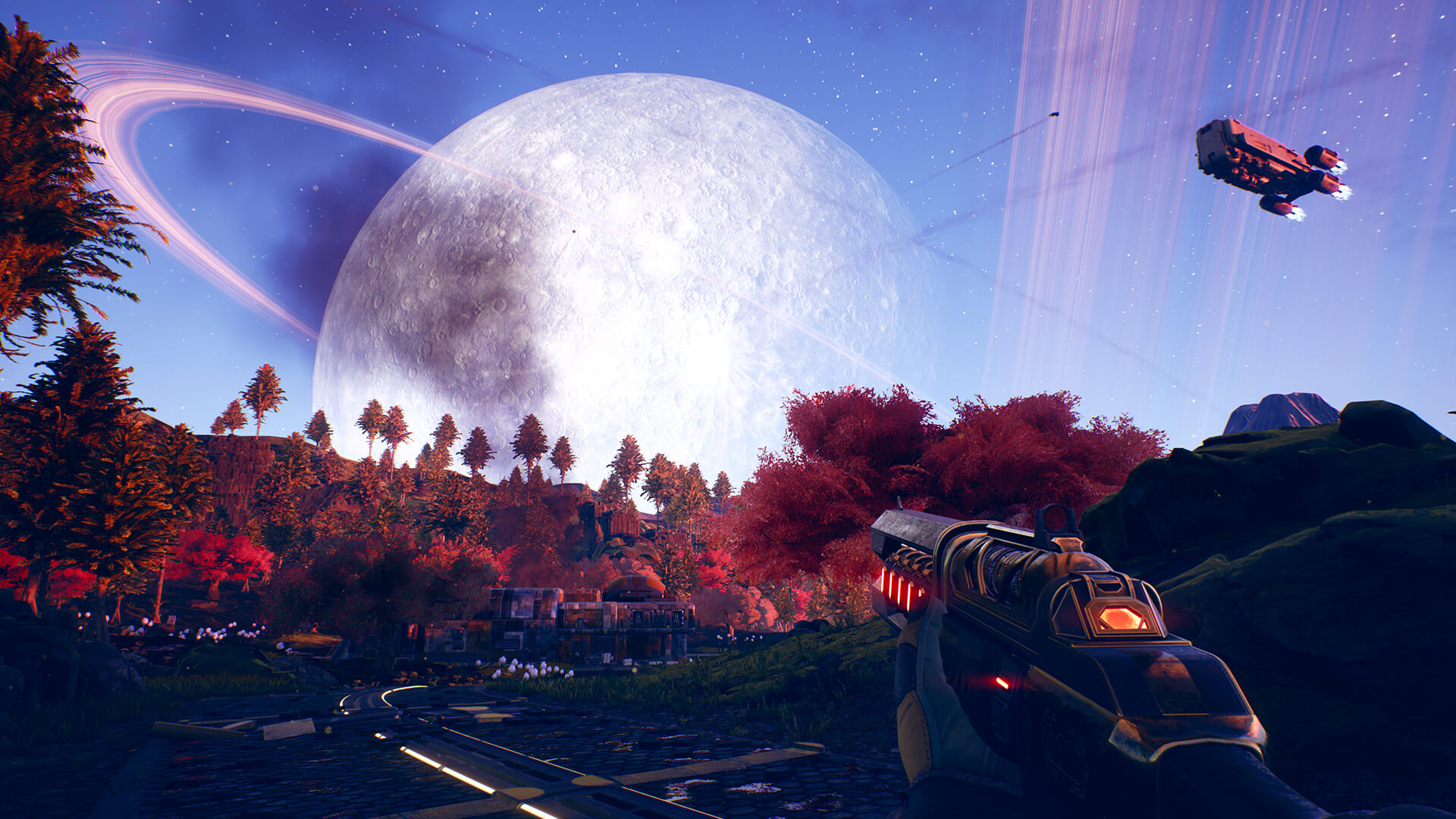 Of course, you’ll know all this already if you checked out The Outer Worlds on PS4, Xbox One or PC when it first released. However, many have been curious since its original announcement just how the Nintendo Switch version will both look and feel to play. Well, we now know, and it is unfortunately quite a rough ride. Environments lack detail, load times between areas are long, and sometimes when just generally traversing the world you’ll be hit by a buffering icon so that the section up ahead has time to render.

All this isn’t to say that The Outer Worlds on Nintendo Switch is totally unplayable, just that there aren’t many reasons – outside of playing on the go – for someone who has played it already to dive back in; especially when you consider that it’s available incredibly cheaply on Xbox One via Game Pass. Compared to that version the visual concessions here are significant, yes, but if it’s the only way you can experience this one of the best Western RPGs of recent years, it gets the job done. The Witcher 3’s Switch port last year proved that getting contemporary games running on the system was a challenge. As such, in many ways, The Outer Worlds on Nintendo Switch is a similar situation.

Despite its graphical woes, however, The Outer Worlds on Nintendo Switch succeeds at being a pulpy yet satirical space adventure of the best kind, full of humour and personality not indicative of many Triple-A RPGs you see these days. Combat might also be relatively basic, but when it comes to imaginative world-building, enigmatic characters and varied mission design, The Outer Worlds doesn’t let you down. Time to buckle up captain because this is one space western that shouldn’t be missed – regardless of the platform you intend to play it on.

The best price for The Outer Worlds on Nintendo Switch: