PS5 vs PS5 Digital Edition: What is the difference? 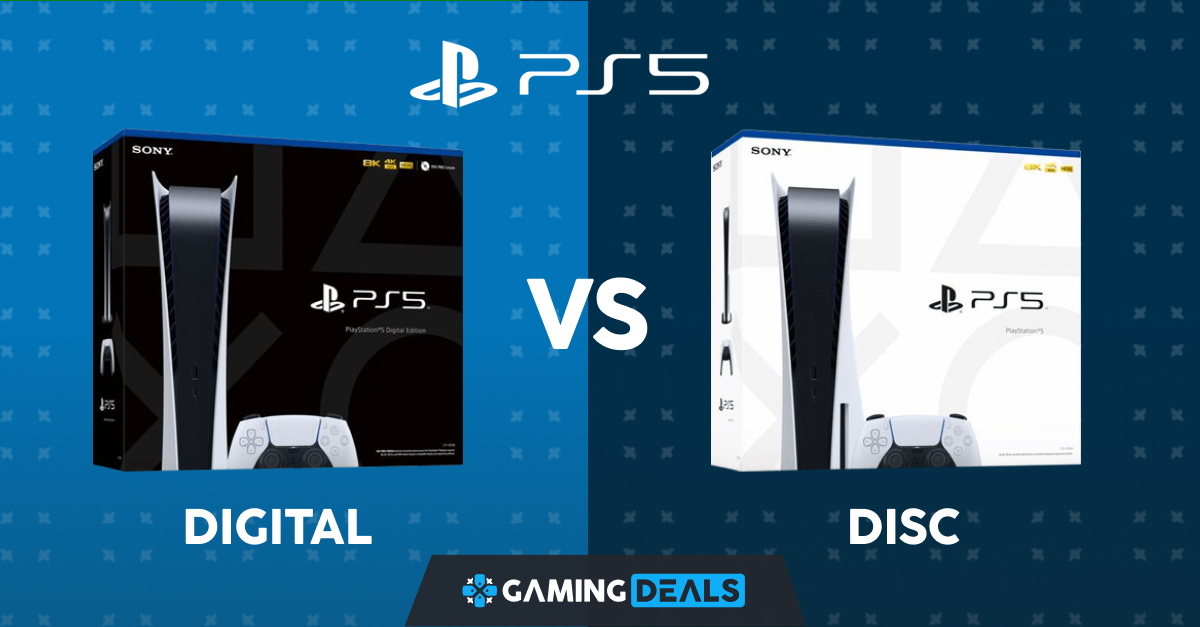 June 11th, 2020 marked the day when Sony finally unveiled the PlayStation 5's finalised specs and design. The biggest difference between this and previous console generations is that the PlayStation launched with not one, but two models. Naturally, this leads us to pit these two console variants together in a PS5 Digital vs PS5 Disc Edition battle.

In this guide we’ll break down everything worth knowing about both PlayStation 5 editions, weighing up the pros and cons of each so you can make an informed purchase decision. There are plenty of aspects to consider, so let’s get into it…

One of the most notable differences between the standard PS5 and PS5 Digital Edition is the slight change in appearance. Both variants ostensibly look the same, for the most part, with the exception that this new, digital-only version loses the 4K Blu-Ray drive – and therefore much of the bulk. Because of this, the PS5 Digital Edition does tout a bit more symmetry compared to the standard model, with the black and white tower neatly bowing inward before the chassis points outwards at both the bottom and top.

Of course, the console’s appearance will have absolutely no effect on how PS5 games look or run; it’s simply about choosing which option will best suit your purchasing habits. If you’re a disc-free gamer who doesn’t much like to have video game boxes around to gather dust, you’ll likely punt for the PS5 Digital Edition to play games via digital download. However, if you’re a player that enjoys the flexibility of being able to lend games to friends or trade them in when finished, the standard PS5 console will be the one for you. Both variants look relatively smart either standing or led down.

Outside of the 4K Blu-Ray drive, both the PS5 and PS5 Digital Edition pack the exact same technical capabilities under the hood. This may likely change (as it often does) midway through the console’s lifecycle, especially since Sony recently announced it'd change semiconductor suppliers due to shortages, but until then here are the confirmed specs for both variants of the PlayStation 5:

When it comes to games there will be absolutely no difference shared between the two PS5 variants at all, other than the fact one will allow you to play physical discs and the other will not.

If you opt for the PS5 Digital Edition you’re only option will be to download titles from the PlayStation Network, while standard PS5 owners will be able to do that and pick up games in retail stores as well. Losing the ability to buy physical games may be a worry for some when it comes to the PS5 Digital vs PS5 Disc edition debate due to a preference towards physical media/physical media often being cheaper post-release.

However, keep in mind that PS5 gift card and wallet top-ups are available for cheaper in some places and alongside the PSN stores sales can make for some fantastic savings on your digital games.

One of the major hot topics in the PS5 Digital vs PS5 Disc Edition debate was always going to be price. It was eventually revealed that both variants would retail for different RRPs. The standard PS5 with a disc drive currently retails for $499.99 / £479.99, while the Digital Edition comes in at £90 less at $399.99 / £389.99. Features like native 4K resolution support and ray-tracing are visual flourishes that don’t come cheap, hence why the price hike over the PS4's initial price back in 2013.

One way of making the price of either PS5 variant more palatable is by opting to pick up a bundle as they become available. This is an option offered by most retailers known to stock PS5, adding more value to the overall package by including additional first-party accessories and Triple-A games.

Take a look at the most common FAQs regarding the differences between the disc and digital PS5.

Yes, the Playstation 5 disc console can play digital games that have been downloaded from the internet as well as physical disc games purchased in-store.

No, the Playstation 5 digital console does not have a disc drive and cannot play physical copies of games.

Will games be cheaper if I buy them digitally?

As of right now, digital games tend to be more expensive than physical games.  An extra premium is placed on digital games due to the instant downloadable delivery of the game.

It's worth noting that you cannot sell a digital game to another person as the game is digitally registered to your account with PSN.

So, which PS5 should you buy? If you're looking to save a bit of money and don't care about physical games, then go for the digital model. But if you want the option to play physical games or want to use your console as a 4K Blu-Ray player, go for the standard/disc PS5. Whichever route you choose, Sony has made an impressive next-gen console that's sure to please gamers everywhere.

If you're looking for the best deal on either model, be sure to check out the current PS5 deals available.

Have we missed anything? Let us know in the comments below.