1 year ago by Scott Stowe
0 Comments

When it comes to their flagship character Super Mario, Nintendo don’t mess around; having arguably some of the greatest games of all time our favourite Italian plumber is no slouch, with his gaming titles racking up hundreds of millions of sales.

Mario has tried his hand at many things, with platforming, kart racing and partaking in the olympics alongside Sonic. But what are the best Mario games for Switch?

Well today we will be giving our verdict on this with our own ranking of the best Mario games for Switch!

If you’ve recently picked up a Nintendo Switch OLED or are already a Switch owner and missed out on any of these titles, we think they’re all worth picking up this holiday period!

Furthermore if you’re looking for some Nintendo Switch gift ideas then check out our Christmas Gaming Gift Guide. 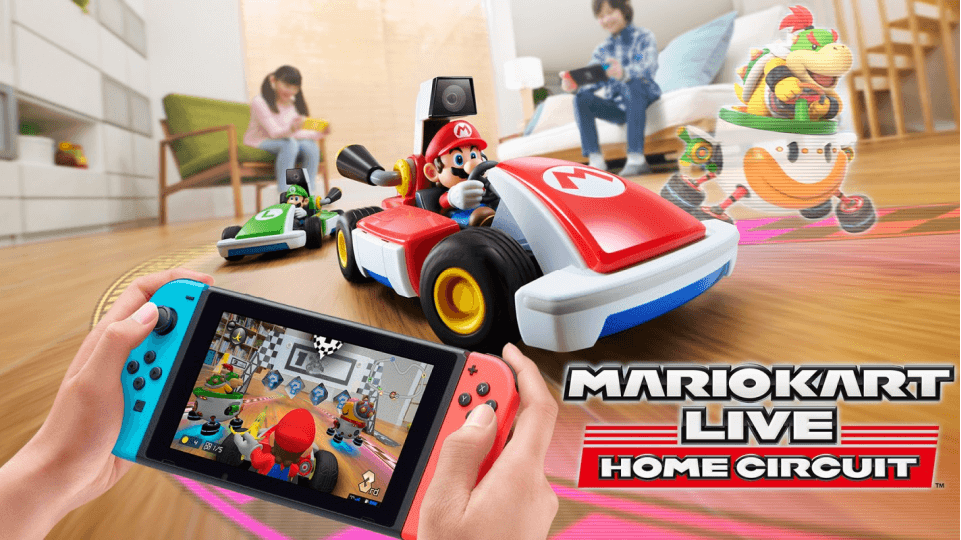 Nintendo are always flexing their ingenuity when it comes to new ways to play games and have fun; whether it be their console designs or folding cardboard LABO sets it's hard to not admire their inventiveness. Mario Kart Live: Home Circuit is yet another example of this where you have a physical toy car which you are controlling via your switch inside your actual home. Pretty crazy right? This is a rather rogue pick for the list of best Mario games for Switch but in our opinions it's just so fun to make your own courses and have Mario next to you… In real life. 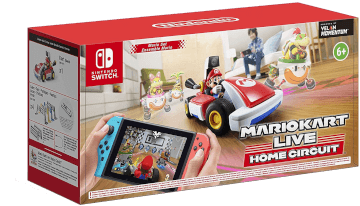 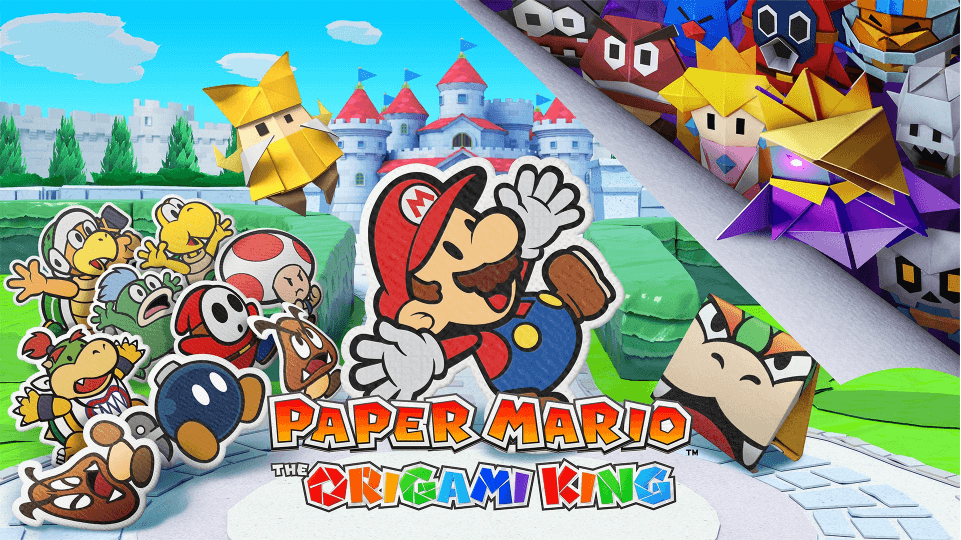 Whilst not hitting the heights of the GameCube’s Paper Mario: The Thousand Year Door, Paper Mario: The Origami King is still rich in personality and style. The strengths of this game really are its visuals as its combat definitely leaves something to be desired as a result of its simplicity leading it to feel rather repetitive. However it is definitely one of the better games in the series and has a world that is fun to explore, but if you’re looking for more than that perhaps there are other Mario games on this list more suited for you. 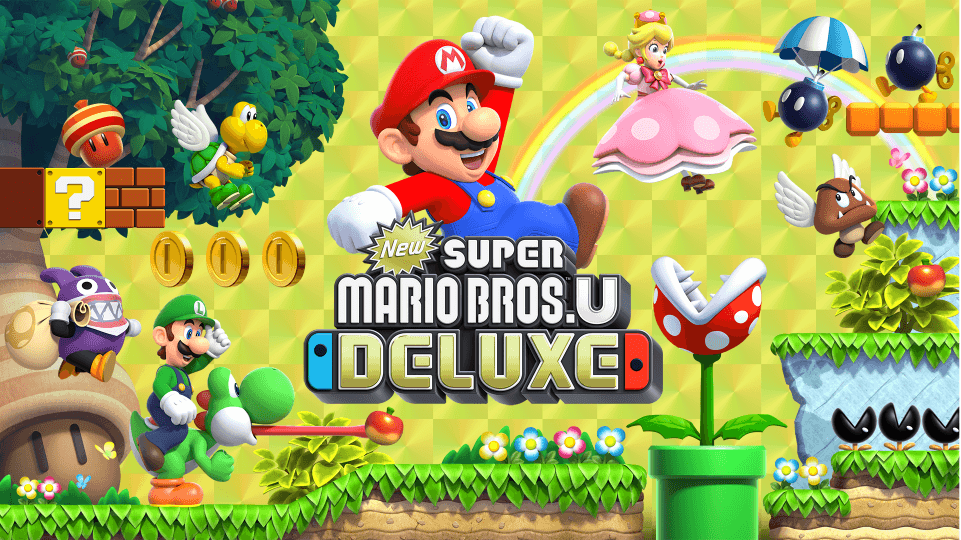 Another title lost in the ether of Wii U games is Super Mario Bros U. Luckily the game was repackaged for Nintendo Switch and is a great 2D side scroller and is a good pickup for those who still enjoy the 2D style Mario game. There’s plenty of content here to enjoy and was definitely one of the best Mario games on Wii U and deserved to be played by more people. However if you did play on Wii U there are few new additions here and we would not recommend double-dipping on New Super Mario Bros U Deluxe. 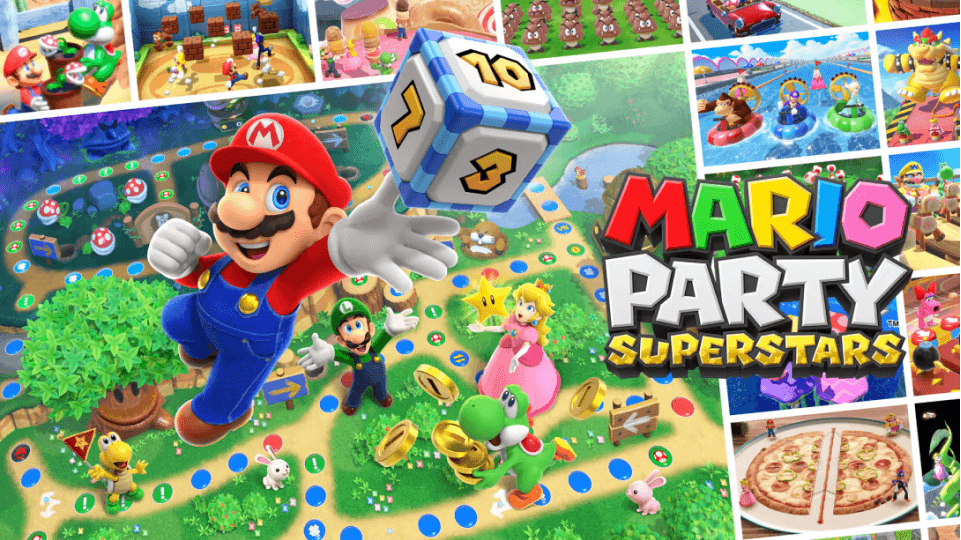 The latest release in the Mario Party franchise was released back in October and features a collection of the best boards and mini-games of past Mario Party games. For fans of the series Mario Party Superstars is an easy recommendation especially if you played the N64 boards it’ll most certainly pull at those nostalgia strings.

As we approach Christmas, is there a better time to play Mario Party with friends and family? We think not.

One of the stranger Mario cross-overs of recent memories is Mario & Rabbids: Kingdom Battle which is a turn-based tactics game somewhat akin to the likes of XCOM. Whilst not as nuanced and complex as XCOM the game combines surprising deep gameplay and great humour to make for a most enjoyable experience.

The sequel Mario + Rabbids Sparks of Hope will be coming to Switch sometime next year so what better time than now to try this colourful cross-over Mario game. 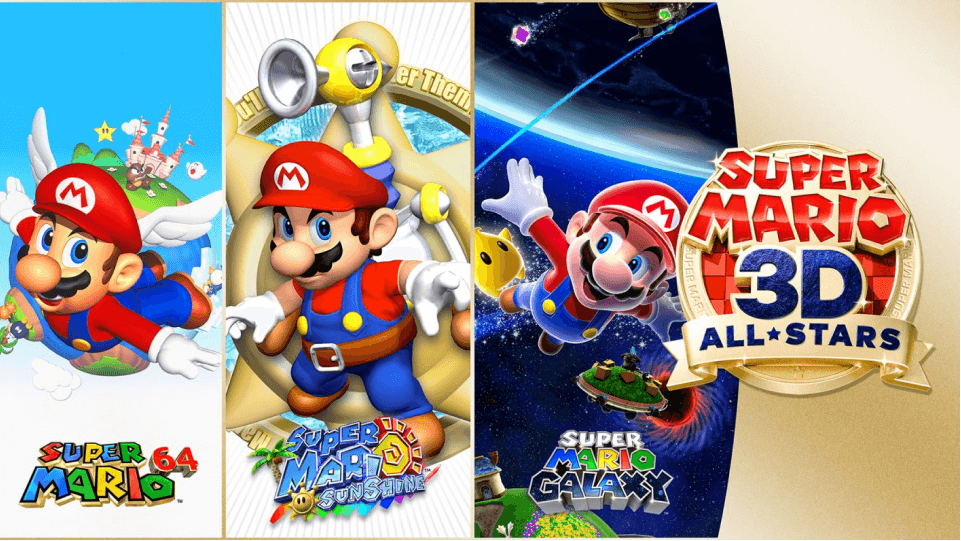 Super Mario 3D All-Stars is a collection of 3 Nintendo Mario classic games with Super Mario 64, Super Mario Sunshine and Super Mario Galaxy. The game had a bit of a weird initial response as a result of it being a limited physical release with Nintendo saying the physical version of the game would not be available after March 2021 (it still is at some stores), this definitely gave the game a bit of a negative aura as a result of poor marketing.

In some regards the remaster is a bit lacking, and could do with some extra tweaks to controls etc to bring up the older games to a modern standard. 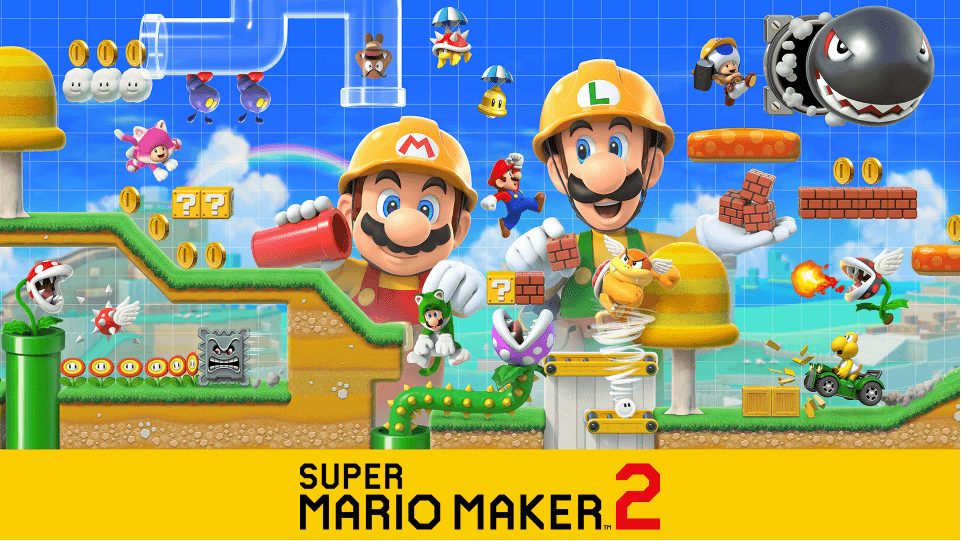 Super Mario Maker 2 is a game of almost infinite gameplay thanks to the incredible people who play these games. Whether you’re like me and just love platforming or you’re a creative this game has so much to offer.

The game has its own single player story switching between different 2D Mario styles and solving puzzles which is fun in itself but the real game starts online. For the creatives you can spend your time making your own levels to enjoy and share with others, making pretty levels or just incredibly mean and difficult; the decision is yours.

For me personally the fun of this game is enjoying other people's levels, there's such a selection to enjoy whether you’re a masochist who loves difficulty or just want to see some well designed fun. There’s something for everyone here making it one of the best Mario Switch games. 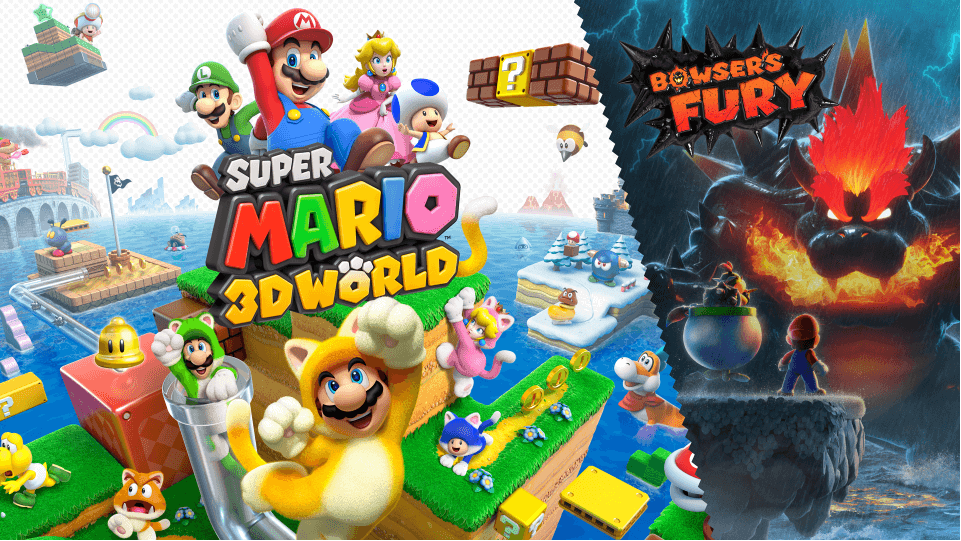 Similar to Mario Kart 8, Mario 3D World was originally released on the Wii U and as a result only a small player base got to enjoy this great Mario game. Luckily for us Nintendo Switch players Nintendo re-released the game with an exclusive piece of content called Bowsers Fury. Mario 3D World + Bowsers Fury is a 3D platformer with a slightly less open world than previously mentioned Super Mario Odyssey but still great fun nonetheless. It also boasts up to 4 player co-op where you can set off and save Sprixie Kingdom with friends and family!

All things considered, that’s why Mario 3D World + Bowsers Fury makes its way towards the top of our list. 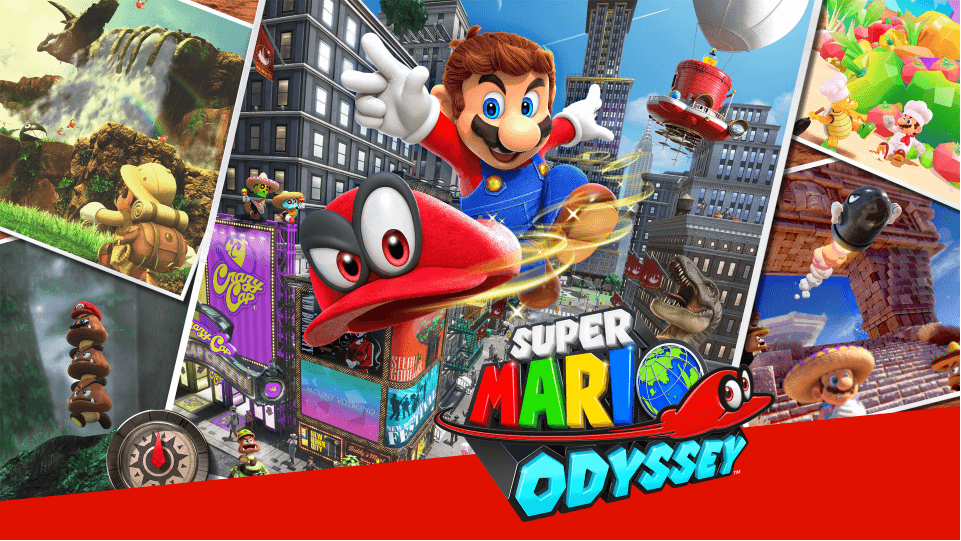 Super Mario Odyssey is a game centred around platforming that rewards exploring these incredibly well designed worlds that Mario is visiting alongside his new companion Cappy. The new gimmick of controlling different monsters such as Goombas and chain-chomps to overcome platforming puzzles is nothing short of genius. You’re always being rewarded for exploration with the collection of moons and all-in-all it’s just a great game.

For these reasons and because my nephew would kill me if it wasn’t high on this list, it is one of the best Mario games for Switch! 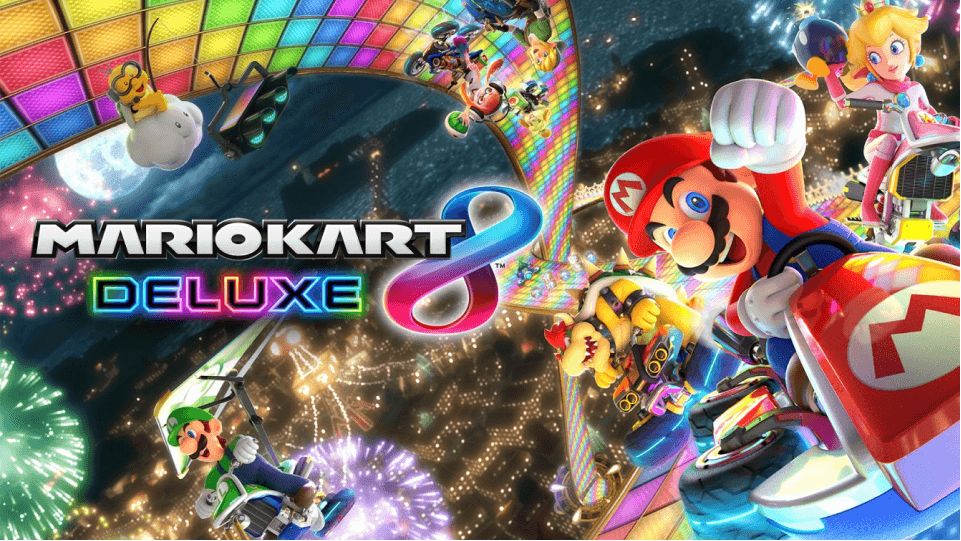 So here we are, the end of the list, our number one has to be Mario Kart 8 Deluxe. This game is so good that it seems to have stumped Nintendo on what to do next with the franchise. Mario Kart 8 originally released on the Wii U back in 2014 and then was brought to Nintendo Switch in April 2017. It is such a great package, a tonne of characters, karts and extras to unlock with a grand selection of beautifully designed courses to race through. What's not to love? A game you can spend hours playing on your own or with family and friends.

For us this is the best Mario game on Switch thanks to all its features and almost infinite replayability. This is a game I love through not only its gameplay but the social interactions and fun times it has blessed me with when playing with others, even the rage-inducing blue shells. Mario Kart 9 is really going to have some work beating the greatness of this game.

So that completes our picks for the best Mario games for Switch; what did you think? Were there any glaring omissions, do you think my opinions are crazy? Feel free to let us know down below.