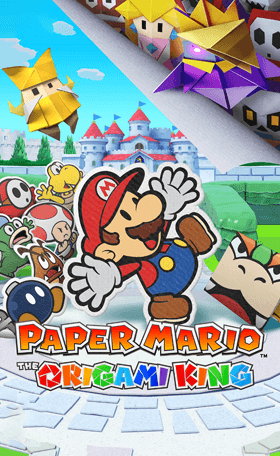 Find the best deals on Paper Mario: The Origami King for Nintendo Switch. We compare 26 deals (starting from £24.97) across every edition offered by our partner retailers.

Paper Mario: The Origami King marks the first entry into this RPG spin-off series since 2016’s Colour Splash. Coming exclusively to the Nintendo Switch on July 17th, this delightfully colourful sequel presents players with a beautiful paper world to unfold, all in the hopes of thwarting the attempts of the titular origami king. Luckily, this time around, Paper Mario is joined by new companion Olivia as well as his usual host of friends.

Paper Mario also has a range of new tools at his disposal to help him succeed. One of these is a new ability called 1000-fold arms, which allows you to manipulate the surrounding landscape with peels, pulls and stretches. Skills like this come in handy to solve Paper Mario: The Origami King range of puzzles and hidden secrets.

For those unaware, Paper Mario doesn’t play like a super mario game in the traditional sense. The gameplay isn’t about jumping and navigating worlds across the screen, but rather this is a thoughtful RPG that challenges you to do battle with enemies at a more thoughtful pace. Paper Mario: The Origami King features a whimsical story worth investing in. Characters and locations just so happen to be made out of paper.

A variety of colourful papercraft settings to explore

Much of your time in Paper Mario: The Origami King will be spent recruiting companions to help Mario on his journey. This means having to travel to a diverse range of locales all made out of paper. Some of the settings confirmed so far include scorching deserts and luscious forests… You’ll even be able to sail the high seas in search off new friends to recruit.

An all-new battle system for this version of Paper Mario

The major change The Origami King makes to the Paper Mario format comes in its combat. This time around it all revolves around a new ring-based battle system, in which Mario must line up enemies in order to maximise the amount of damage dealt. This looks to be simple and fun without risk of feeling overbearing, all of which is perfectly in keeping with the target family audience.