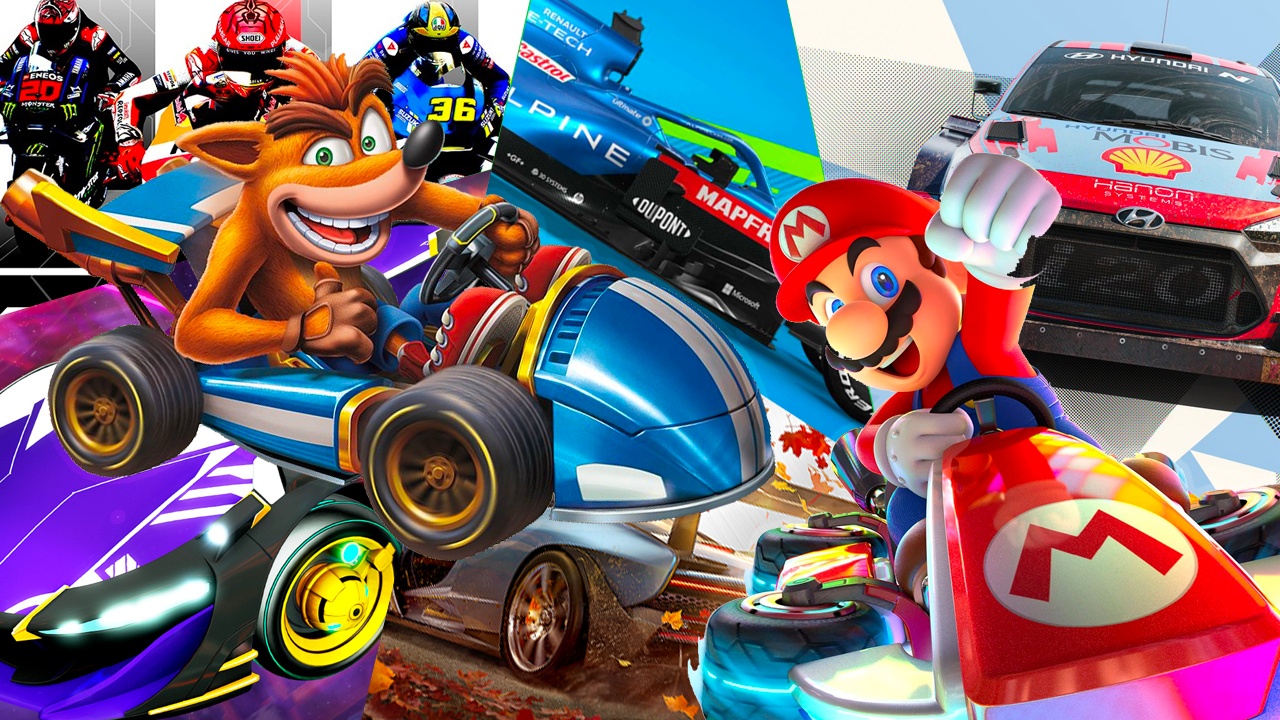 Throughout the years, driving games have been ever present as a genre for video games, from arcade titles like Mario Kart, open-world adventures like Forza or 'Real-to-life' games like F1: there's been plenty of choice for gamers.

Obviously, the idea of the 'best' is going to be open to interpretation and depends on what type of driving game you prefer. With that in mind, below we will take you through some of our picks for the best driving games.

Maybe a controversial one to start - is it truly a driving game? Or just a football game with cars? We'd argue it leans towards the driving genre. Either way it's a fantastic game.

Combining high-powered cars, a giant football and over-the-top explosions, this is so much fun to play and as a result makes it into our list of the best driving games (albeit a driving game in the loosest of terms). It's also free to play now - and is even available in an Xbox Series X|S Rocket League & Fortnite bundle.

You can also get the expanded version of the game with tones of additional content;

If realism is your thing, the F1 series of games from codemasters is pretty much the only place to start. F1 2021 is the latest title in the series. Released as the title suggests in 2021, this game is still relatively new, yet it is hands-down the best in the series so far. The game builds on the series' reputation with an all new story mode, new driving dynamics and of course an updated roster of drivers, cars & tracks.

F1 2021 lets players compete in seasons, create & manage their own F1 team (which we have seen in previous years of the game), but now adds in the 'Braking Point' story mode. This story takes on a RPG aspect as users play as rookie driver Aiden Jackson - starting in Formula 2 and trying to go up the ranks to earn a shot in F1 and eventually become World Champion.

F1 2021 is a genuinely great recreation of the sport, and gives gamers a huge amount of flexibility to change settings on difficulty, race rules and duration - meaning you can make the can a realistic or fun as you want. All told, it's easy to see why we think it's one of the best racing games.

Imagine yourself going for a that perfect road trip around the UK, cruising the cotswolds, maybe the Lake District or even taking a drive round Edinburgh - only that road trip is done in a Bugatti!

Unlike other racing games, Forza Horizon 4 is an open-world experience, meaning it's not simply one track after another. The game allows gamers to pick and choose which races they want to participate in and in what order. So if you prefer a peaceful drive looking at the scenario, enjoy!

Combine this gameplay with the extensive range of car models & manufacturers in the game and Forza Horizon 4 really is a game that can be played for hours without getting stale. Hence, it's in our list of the best driving games.

2022 represents the end of many gamers wait for a new Gran Turismo game (provided that GT7 releases as scheduled). And while that may likely end up surpassing any previous games in the series, at present you can't go far wrong filling your gaming time with Gran Turismo Sport.

Originally released back in 2017 (5 years ago already!), the game still holds its own in the world of racing video games. GT Sport is a top racing game, with a great selection of cars & tracks, both of which have been made better over time due to regular game updates since its launch.

There's also a creative element to the game in the form of the livery editor. Yes, you should be excited about GT7 - but Gran Turismo Sport is still good fun right now.

Current developers Kylotonn have been developing the games since WRC 5 (2015) and WRC 10 represents the best experience yet, WRC 10 is packed with new content and experiences. The addition of the History Mode allows you to relive past historical moments in the sport from present day all the way back to 1973. There are 19 historical events for you to test your driving skills in.

The game also include brand new content with 4 new rallies, 6 historical rallies and 20 legendary cars from Alpine, Audi, Lancia, Subaru, Ford, Mitsubishi, Toyota, and more. The career mode, hailed as one of the best-developed and most complete in a racing game, has also been upgraded and includes a livery editor, meaning you can let your creative side out.

Combine all of this with a hyper-realistic and ultra-precise physics engine & WRC 10 simply had to be on our list of the best driving games.

Dirt 5 represents a complete revolution for the main Dirt series. Developers Codemasters decided to basically remove all semblance of simulation, instead opting for a far more arcade-like racing experience that takes influence from all manner of games gone before it (except maybe the rest of the Dirt series).

It's not excessively intense, nor offers too much variety in terms of the game modes, however, its a fast, wacky driving experience that is surprisingly addictive. Rightfully earning its spot on our list.

The first motorcycle entry in our list, the MotoGP series of games serve up a well-balanced, detailed motorsport simulation. MotoGP 21 is the latest game in the series.

Developer's Milestone have been working on the series for a long time now and it shows. Each year's iteration has been getting stronger and stronger. A real area of improvement over the years has been in the handling, which now gives the user a finely-tuned riding experience, giving a great balance of both a sense of precariousness and control as your throw the bikes into the corners (so a pretty good reflection of real-life motorcycling). It is this sense of jeopardy that makes the game so enjoyable, the challenge of mastering the beast as it were.

Combine that with the updated rosters, teams & liveries and you have a very good racing games. Especially if motorbikes are your thing

This is the result of the combination of 'piggy-backing' off the Mario Kart concept, but with the twist that it's developers just so happened to be one of the best game studios in the world, Naughty Dog.

The game doesn't stray far from the same ideas (as Mario Kart) at all, but it does everything right, and the ends up being a hugely entertaining racing game.

Although it doesn't have the 'originality' of Mario Kart, if you just love Crash, Crash Team Racing: Nitro-Fueled can't really be beaten as a wacky bit of fun.

Its the most successful & best-selling racing games series ever. We could just end it there and say thats reason enough to be on the list. If you haven't played at least one Mario Kart game in your life, where have you been since 1992?

Mario Kart 8 Deluxe really is brilliant fun, especially when played multiplayer with friends. It features tricky courses, arcade-style driving and a loveable cast of characters from Donkey Kong to Link from the Legend of Zelda.

The second Forza Horizon game to make the list, and we would argue, despite Forza Horizon 4 being an incredible game - Forza Horizon 5 is the best game in the series and one of the best Xbox Series X|S game to date (if not the best).

Coming out on the Xbox Series X|S has meant that the game could take advantage of the higher performance from the new consoles & it really is impressive.

It offers flawless racing and a wealth of activities, that are only added to by the beautiful settings and the new progression system, encouraging players to focus on the features they enjoy most. The 92 rating on Metacritic rates it as 'Must Play'. An essential game for Xbox users, and worthy of consideration for the best driving games ever.

So that's it, our list of the best driving games. It's pretty comprehensive, and we tried to make sure that many platforms were covered for all the different gamers amongst you. Let us know your thoughts in the comments below;