Is Rage 2 any good? Should I buy it and where from? 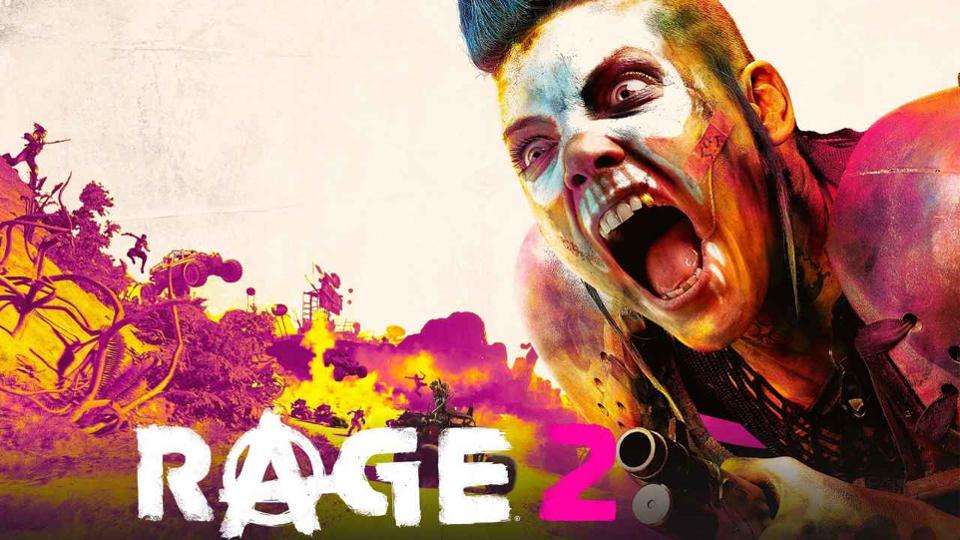 There’s certainly no shortage of games set in the dilapidated future these days. But as far as post-apocalyptic wastelands go, Rage 2 is one of the wackier renditions by far. If this wasn’t reason enough to check it out on day one, however, we thought we’d highlight a few other ways Bethesda’s latest and greatest first-person shooter looks to be a fruitful purchase for anyone craving some satisfying gunplay. You don’t even have to have played the first game either. Rage 2 is a largely standalone adventure featuring a whole new story and protagonist.

Rage 2 has now officially released (14th May), and the deals above are today's cheapest deals in the UK. But before you go on to buy Rage 2, here’s everything awaiting those about to play Rage 2.

A more colourful take on the post-apocalyptic wasteland

We already touched upon this in the intro but it’s worth reiterating again: Rage 2 isn’t just another Triple-A shooter set in the post-apocalypse. No, this neon-infused shoot-a-thon, instead chooses to do things differently, setting players off within a more colourful take that sees gas clouds and explosions emerge in fanciful pink and purple. This palette also translates to your HUD as well as the in-game anarchy, with every element of chaos being relayed to you via glitz instead of dust. 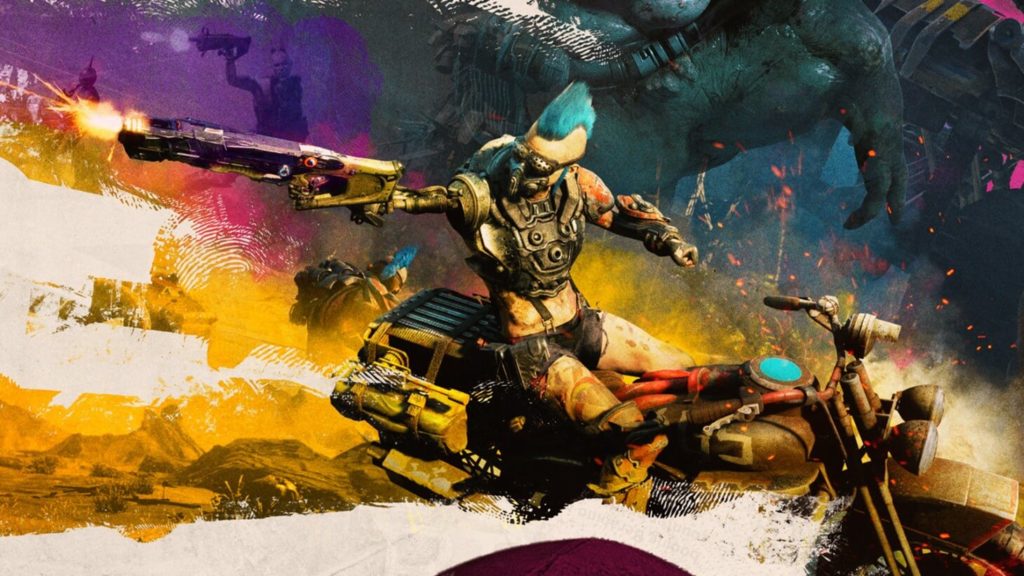 This might not sound like a big deal at first. But when you take into account just how many future-set games take a more serious approach to the locations you fight through, layering a bit of glamour into humanity’s downfall instantly feels very refreshing. The neon theme also translates into Rage’s 2 sense of frenzy felt in its gameplay, where you’re free to dispatch enemies in the most chaotic and creative way possible. This leads us nicely onto…

Rage 2 sees you step into the role of Walker, a ranger working on behalf of the various factions that make up the game’s world. What makes him good at his job is not just his proficiency with any weapon he turns his hands to, but Rage 2’s Bioshock-style super abilities known as Nanotrite powers. Most allow you to do a lot of expected video gamey things like double jump and raise a shield, but plenty others empower you with the skills of a superhero. 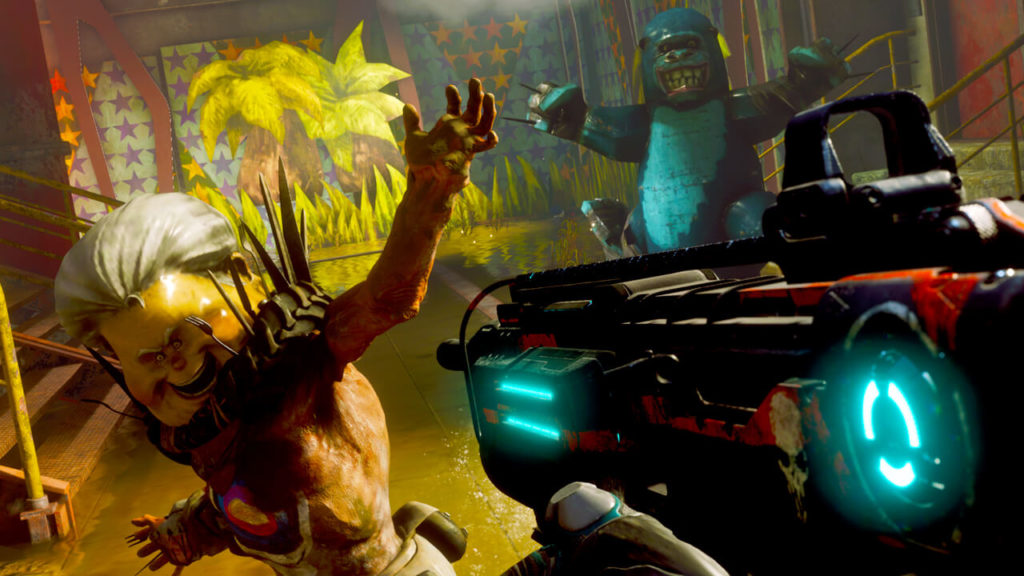 Shatter is a great example of what Nanotrite powers can off you. It works similarly to the Force Push from Star Wars, letting you leap towards any enemy and blasting them back with a rush of air – this makes taking down groups a lot more manageable. Vortex is a power that works just as well, acting as a grenade that sucks bad guys into one space before blowing them apart in opposite directions. Each of Rage 2’s Nanotrite powers are fully upgradeable three times. Just make your way to the Arks littered across the open world map.

Remember that bit in 2015’s Mad Max: Fury Road where Immortan Joe’s convoy is chasing down Max in a bid to gain back his brides? It is, after all, the entire movie! Well, Rage 2 aims to replicate this frantic style of vehicular combat, letting you jump into your car (known as the Phoenix) and having you battle it out against anyone attempting to ram you off road. 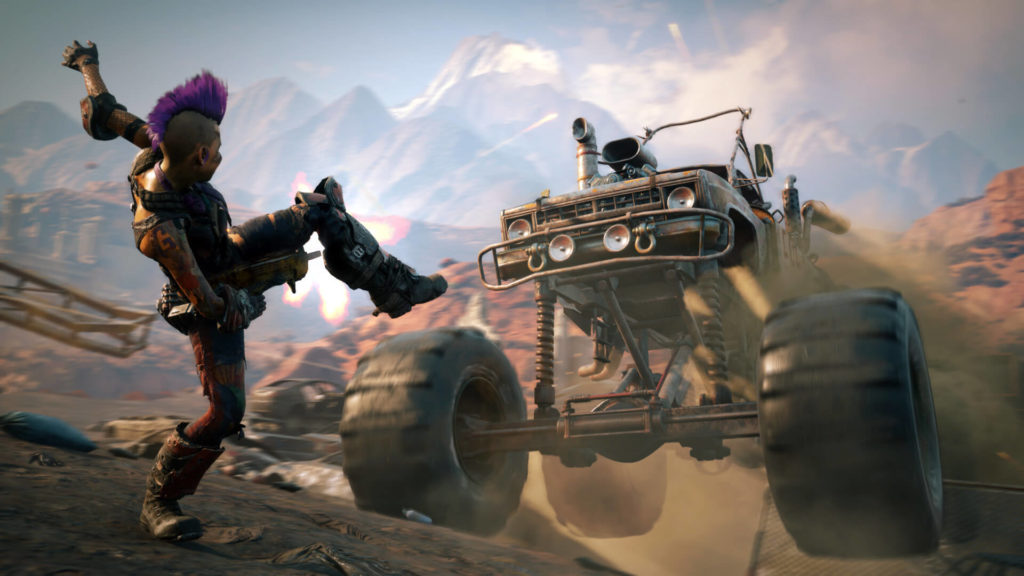 Whereas other vehicular combat games have you circle around enemies over and over again, Rage 2 punts for as different approach. The developers working on the game have made clear their intention to have the Phoenix in Rage 2 handle in more of an arcadey, non-realistic manner. This looks to successfully translate when brushing up against ambitious enemy incomers, letting you gun them down using the Phoenix’s on-board weaponry or go at them head- or side-on. Rage 2 features various other vehicles for you to steal and stash, each with their own advantages.

In what could possibly to turn out to be a late yet elaborate April Fool’s Joke, Rage 2 features what’s known as the Diamond Geezer Cheats voice-pack, which will layer the anarchic in-game audio with the dulcet tones of Britain’s favourite cockney landlord: Danny Dyer. When unlock via Rage 2’s old-school style cheats system, every action you make will be egged on by the soap action. Gun an enemy in the face? You might here an “have it!” or “proper nasty!” to back it up. 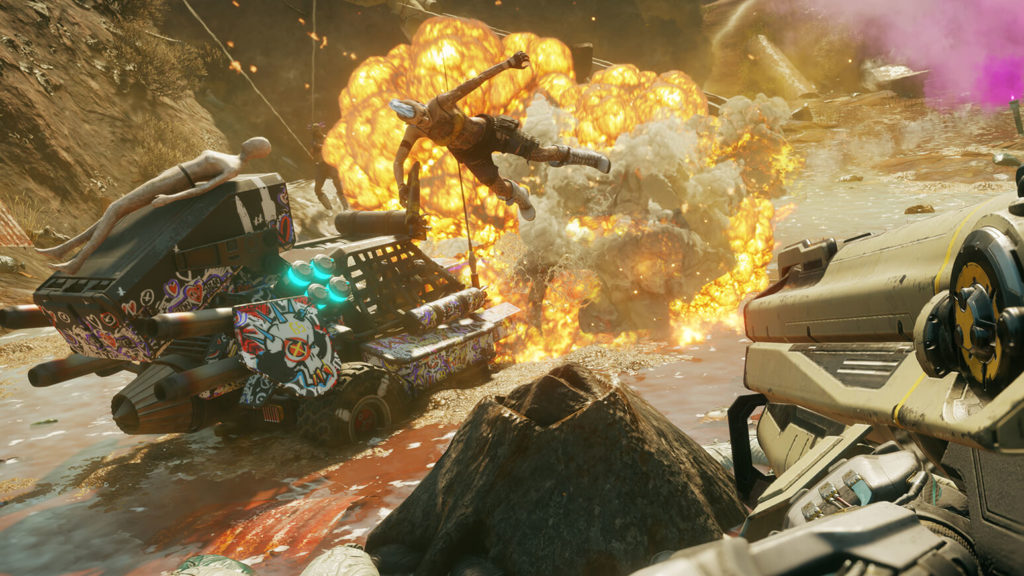 Other confirmed voice packs for Rage 2 include He’s On Fire, Git Gud, Son of Thor along with many others. Each one of these special voice-overs can be equipped and heard at any time once unlocked by inputting the appropriate code, feeding into Rage 2’s brand of chaotic action and tongue-in-cheek sensibility. Danny Dyer in a video game? What’s not to love.