10 months ago by Scott Stowe
0 Comments 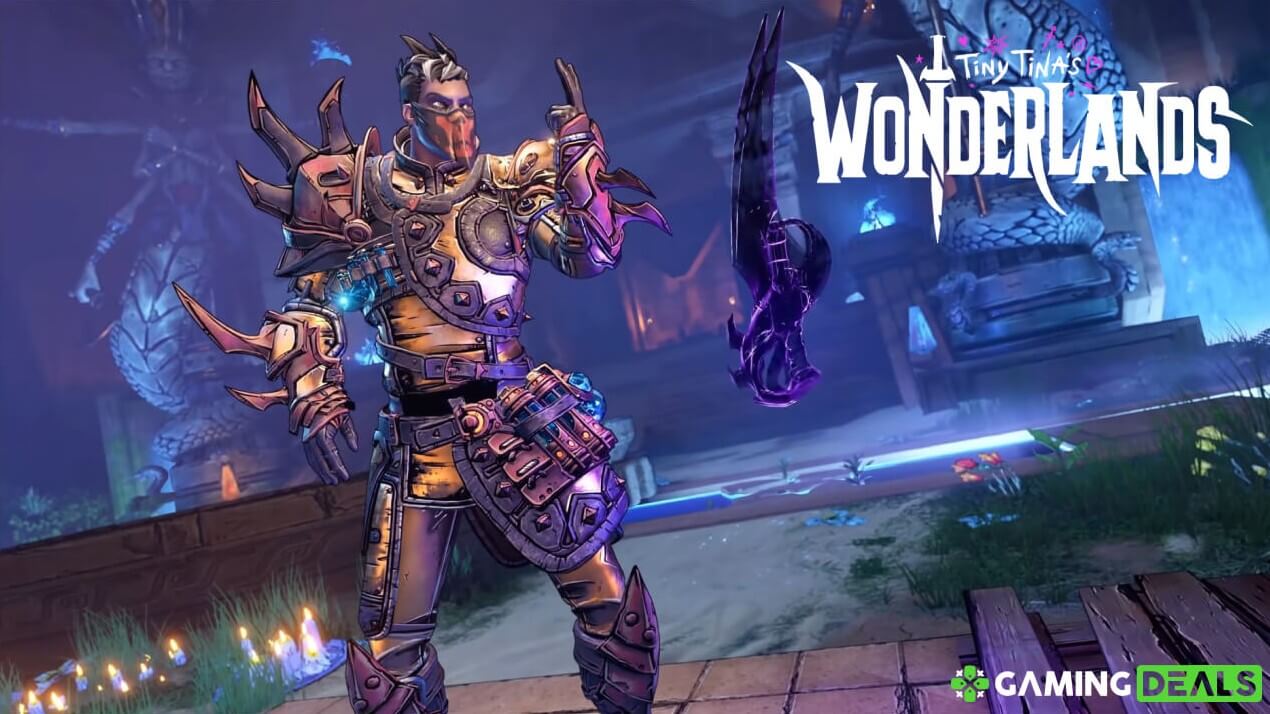 Offering a fantasy-based spin-off from its Borderlands counterpart. This whacky adventure led by your dungeon master Tiny Tina sees players navigate a table-top RPG for an overworld as you drop in with up to 4 player co-op to enjoy tonnes of looting, shooting, and this time more magic and slashing.

Recently we’ve been seeing a lot of information come out about the new classes in the game and this time round with the addition of multi-classing there’s going to be more freedom than ever for building your characters. In this article, we’re going to break down what the new Tiny Tina’s Wonderlands classes are, their passives, active abilities and a brief overview of their skill trees.

We'll also provide you with the best prices and deals for Tiny Tina's Wonderlands to save you some money if you're looking to pick it up, as that is what we do here at Gaming Deals.

What are the Tiny Tina’s Wonderlands Classes?

Tiny Tina’s Wonderlands is launching with 6 classes to choose from all with their own unique playstyles and they are as follows: Brr-zerker, Clawbringer, Graveborn, Spellshot, Spore Warden and Stabbomancer. Each class has a class feat (passive), two action skills to choose from (only one active at a time) and 6 tiered passive skill tree.
The class feats and action skills really offer a lot of flavour to each class whilst the skill tree allows you to customise each character to fit a certain niche for example with graveborn you could build your character based around pets and summons or go for a more spell-casting based set up. Now let's go into detail about each class. Use the handy links below to jump to a specific class. 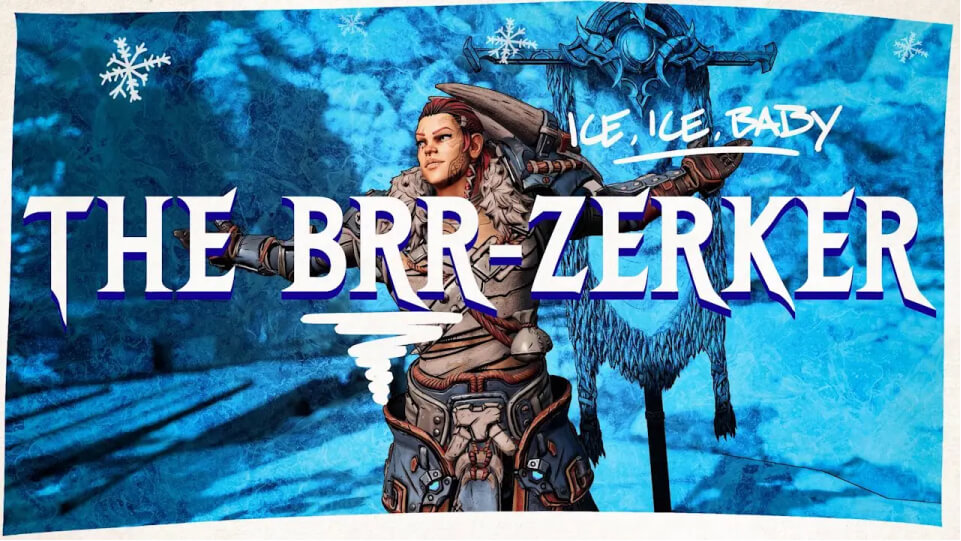 The Brr-zerker is a melee-focused brute infused with the frost element which is one lethal combination. Their class feat causes them to become enraged when using their action skill which adds bonus frost damage to attacks.

Dreadwind: your character will rapidly spin slashing with melee weapons with increased movement speed and a slow immunity.
Feral Surge: the Brr-zerker leaps at their target dealing area of effect (AoE) frost damage instantly killing any non-boss enemies that are below a certain health threshold. If this active skill kills an enemy its cooldown is reset.

Skill Tree: in terms of the skill tree it is probably what you’d expect, a lot of increases to melee and frost damage and increasing the effectiveness of your enrage mechanic.

As Tiny Tina’s Wonderlands classes go Brr-zerkers are best suited to the players who love getting up close and personal, smashing through enemies with both melee and ranged weapons letting out war cries as you go. 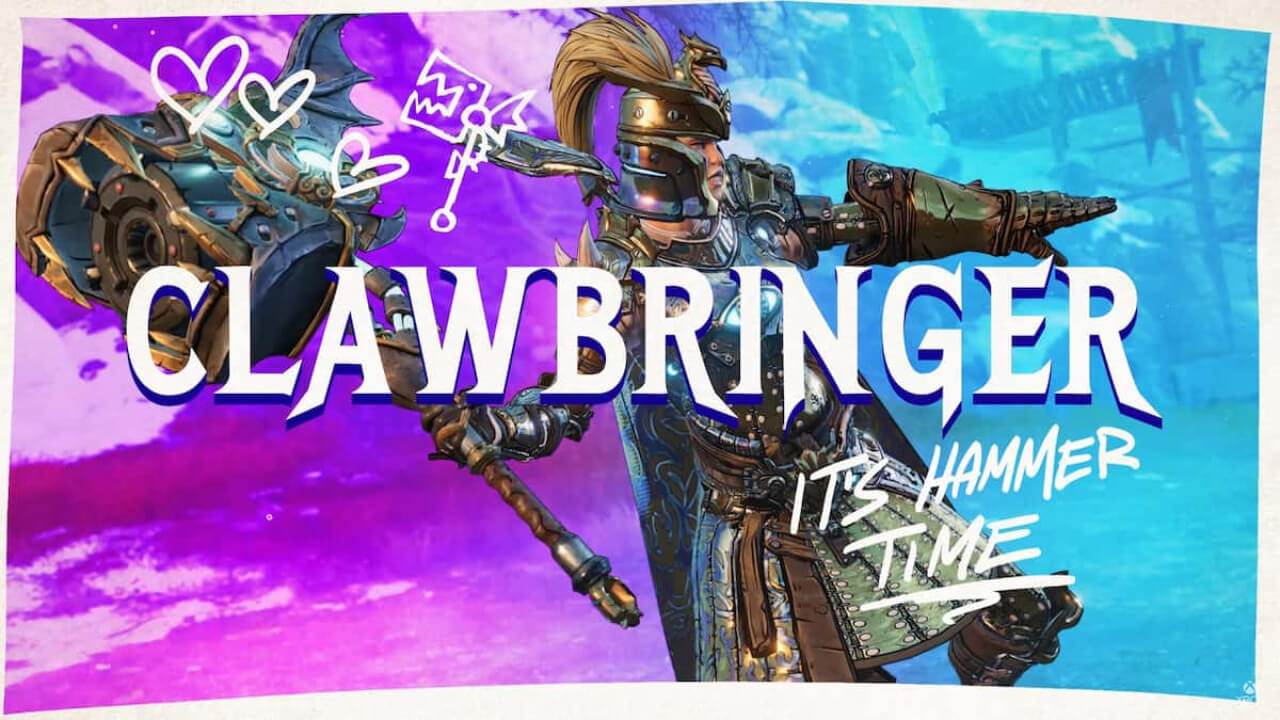 Clawbringers are hammer-wielding warriors who focus on the elements of thunder and flame. Their class feat gives the Clawbringer a wyvern companion to aid them in combat with claw and fire breath attacks. All increases to the Clawbringers attacks also apply to their companions.

Action Skills:
Cleansing Flames: summon your spectral hammer and smash it into the ground for a huge AoE molten explosion.
Storm Dragon’s Judgment: summon your hammer and throw it like you’re the Mighty Thor, dealing lightning damage to all enemies it touches. The hammer will land and continue to deal damage and yes, it can be recalled.

Regarding the skill-tree Clawbringers can focus on the elemental damage of fire/lightning or focus more on companion damage making their wyvern into an absolute beast.

The Clawbringer for me really comes across as some sort of dragon-flame infused paladin, which is such a cool class fantasy. 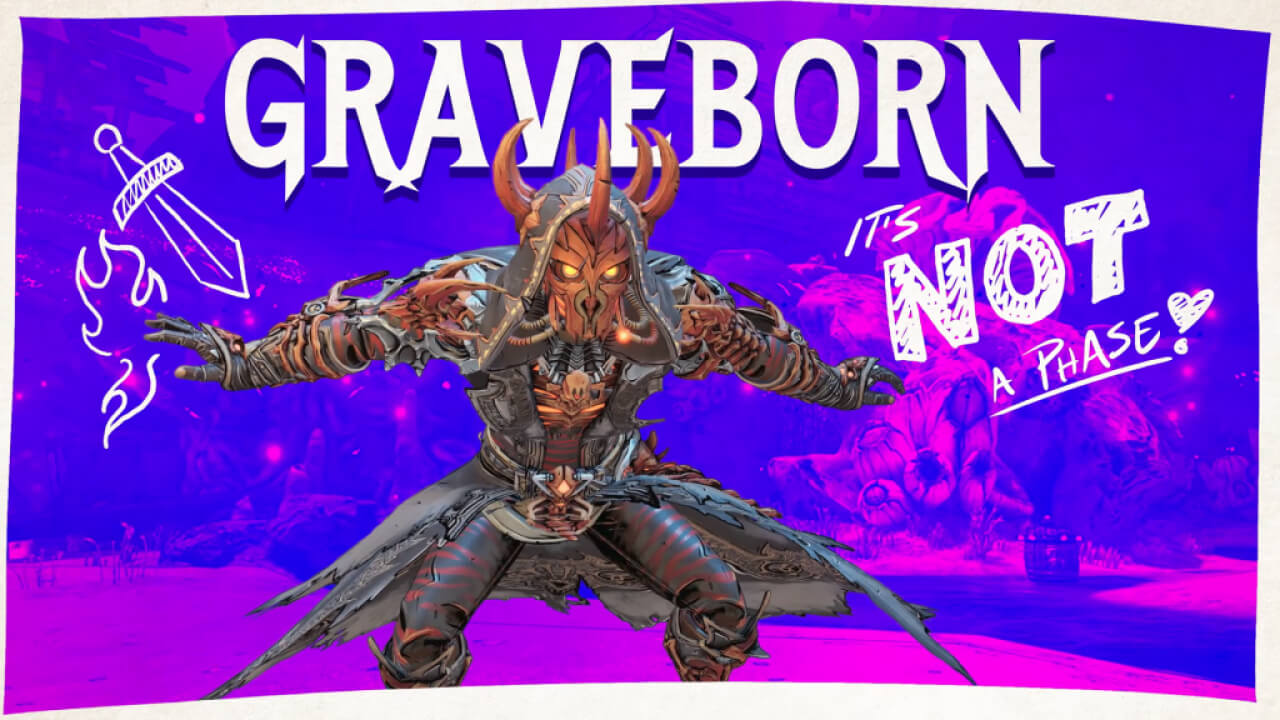 Class info and feat: of all the new Tiny Tina’s Wonderlands classes Graveborn is the one that is really appealing to me personally. They’re versed in dark magics that use the life force of others and even themselves in order to cause devastating damage. This probably says a lot about the kind of person I am thinking about it.
The Graveborn is accompanied by a Demi-Lich companion for their passive ability; this companion will cast the spell Hellish Blast each time you cast a spell to aid you on the battlefield.

Action Skills:
Dire Sacrifice: sacrifice some of your current health in order to deal huge dark magic damage in an AoE to all nearby enemies.
Reaper of Bones: fully heals the Graveborn and increases leech efficiency and grants bonus dark magic damage but they begin to lose an ever-increasing amount of health per second. This occurs until the Graveborn reaches 0 health where they then become invulnerable and restore some health and thus reaper of bones ends.

The skill tree for the Graveborn covers a few niches including a full companion build with more summons, or a heavier focus on spells and health regeneration so you can recover when spending your health points in order to deal damage.

This Tiny Tina’s Wonderlands class has a real necromancer feel about it as you flood the field with your summons and use your own life force to run through your foes. 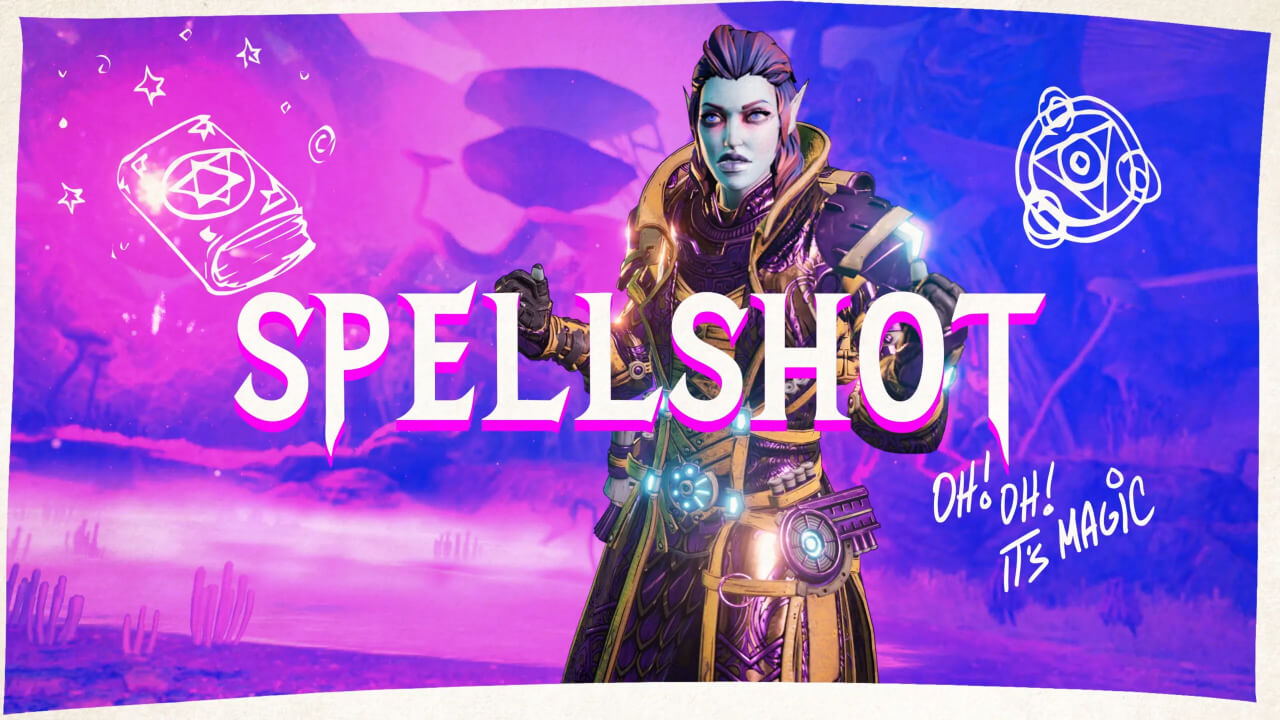 Class info and feat: wielding both guns and spells the Spellshot is a ranged master. Weaving spells and slinging shells whilst transforming enemies into harmless animals with a polymorph ability, all sounds quite fun doesn't it? Spellshot’s class feat is “Spellweaving” which every time a spell is cast or a weapon is reloading the Fatemaker gains a stacking buff that increases spell damage.

Action Skills:
Ambi-Hextrous: the Spellshot can equip spells into their action skill shot and they cast that spell when using their action skill button.
Polymorph: turn an enemy into a skeep (the Tiny Tina’s Wonderlands version of a sheep) rendering them quite literally useless, and grants free spell casts to players who damage the polymorph.

The Spellshot skill tree is mostly centred around, yeah you guessed it spells and shooting. Increasing gun damage, reload speed, Spellweaving stacks etc. Eventually leading to gun critical hits resetting spell cooldowns. This is the Tiny Tina’s Wonderlands class to go for if you want to really focus on ranged gun-play and magic. 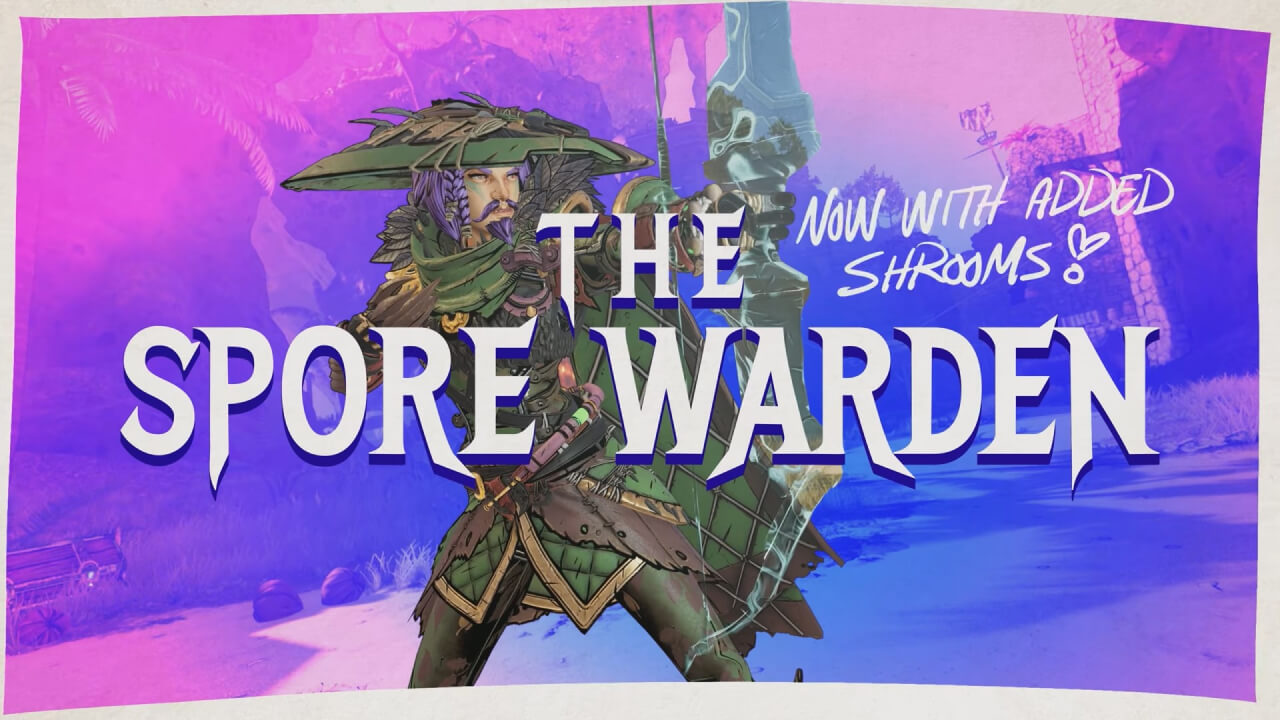 Another ranged centric class is the Spore Warden. These masters of nature use primarily guns and companions. If you’re a lover of the natural world or simply enjoy summoning tornados to cause havoc maybe this is the class for you. Your class feat is the mushroom companion, an adorable buddy that will deal poison damage and lunge at foes on your command.

Similar to the Spellshot the Spore Warden has a lot of gun-based options in its skill tree but also has a lot of companion-themed options. Critical hits and ricochets with Jakobs weapons could be absolutely lethal with this class.

The assassin-type class in Tiny Tina’s Wonderlands is the aptly named Stabbomancer. A sneaky class that is focused on dealing a lot of critical hits whilst summoning magic blades that whirl around the battlefield. The Stabbomancers class feat is just a flat increase to critical hit chance, pretty simple but most certainly desirable. As for action skills they’re thematically very on point:

Action Skills:
Ghost Blade: throw out your ghost blade to a target location dealing damage to nearby enemies. If you press the action skill button a second time after sending out your ghost blade it will teleport to a 2nd target location but its duration will reduce.
From The Shadows: stealth into the shadows, turning invisible and causing all damage to be critical hits. However, these critical hits do deal reduced damage.

As for the skill tree you can choose to specialise in to more critical hits and critical damage, and options to combine both gunplay and melee. They're certainly a versatile class but critting is definitely the name of the game here.

Right so we’ve covered all the classes so let us know which ones appeal to you down below. However, in this game there is a multiclassing feature meaning you will actually be able to combine skill trees and passives of two classes. For example you could combine the ricochets of the Spore Warden and critical hit chance increases from the Stabbomancer and well you can just imagine the havoc you will wreak.

This feature is probably the most exciting addition for me as a Borderlands fan, it opens up more customisation and should allow for a lot of replayability with trying new builds and combos. Keep in mind you cannot change your 1st primary class and your second class will be unlocked around halfway through the game, but the 2nd class can be changed once you have completed the Tiny Tina's Wonderlands main campaign.

We’ve popped below the best pre-order deals available for Tiny Tina’s Wonderlands so if you’re keen to pick it up check them out.