Black Friday 2019 might still be over a week away, but that hasn’t stopped some UK retailers from teasing players about how low they will be selling PS4, Xbox One and Nintendo Switch console bundles for when the sale arrives. Most of them are still only dropping hints, but now a recently leaked in-store pamphlet has confirmed that you’ll be able to get an Xbox One S All-Digital Edition (with Minecraft, Sea of Thieves and Forza Horizon 4) for only £129 from Lidl.

This represents a marked saving when compared to the Xbox One SAD’s standard £199.99 RRP, letting players enjoy a saving of well over £70. There’s still no word whether other popular retailers like GAME, Argos or Currys PC World will be matching this price, but there’s every chance that they will. Until we know this for sure, however, you should expect Lidl’s stock of Xbox One S All-Digital Edition consoles to fly off the shelves quick. 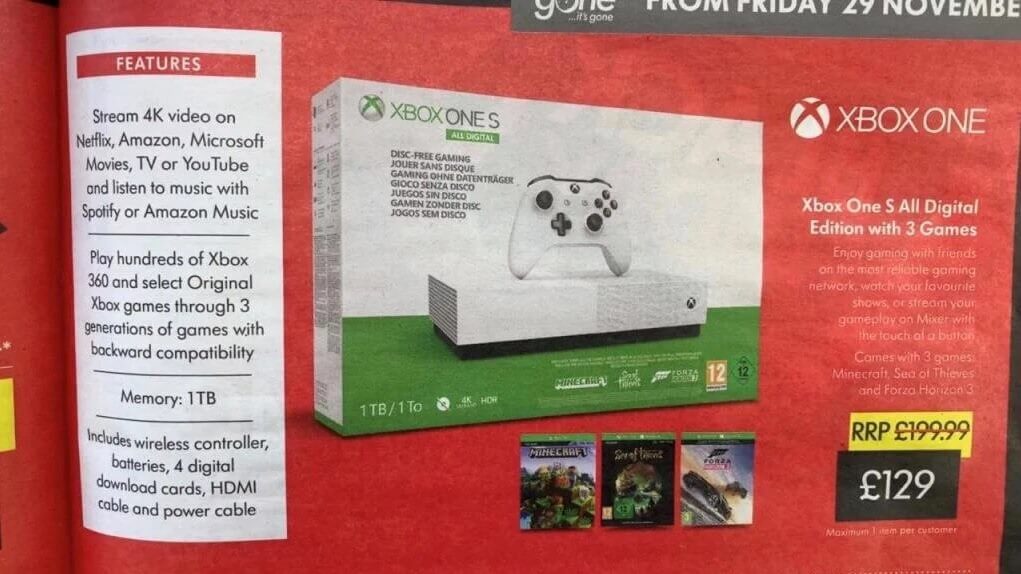 The one proviso to remember is that, as its name suggests, the Xbox One S All-Digital Edition is a home console that can only play games you purchase digitally, with no support to accept standard game discs. Still, if you’re someone that has no problem with marching ever forwards towards the full digital future, this particular bargain is one you should absolutely snap up come Black Friday 2019.

The source of this leak is still unknown, but we’d say that it looks extremely legit. This isn’t too dissimilar, for instance, to the price point we already predicted with an earlier blog post we published towards the beginning of the week, so it’s nice to see Lidl all but confirm that. Xbox One’s successor console is scheduled to arrive in Holiday 2020, meaning that this is likely the cheapest you’ll see Microsoft’s console sell for while it is still the latest on the market.

While we don't have much experience pegging Lidl to the rest of the market in terms of pricing, our years of experience following pricing trends has led us to the conclusion that this could well be a market-wide (including online) price point, not just a Lidl exclusive. The All-Digital's RRP of £199 has already been undercut substantially at several points during the year, and with the next Xbox 12 months away, we've been predicting some time that this cheaper entry point will be used by Microsoft as a way of introducing players to the Xbox ecosystem in time for next year's new console.