Comparing Saints Row to GTA is kind of like comparing a Porsche to a Ford Ka. Sure, they’re similar in that both ostensibly deliver the same core experience, but one always feels significantly more premium than the other. Saints Row: The Third saw the sandbox series lean into these wacky eccentricities more than ever, looking to escape Rockstar’s shadow by focussing on anarchic action, irreverent humour, and an over-the-top story. All remain intact for this newly remastered version on PS4 and Xbox One. And while it might still largely play like a 10-year-old game, Saints Row: The Third Remastered’s overhauled visuals and improved lighting makes this return trip to Steelport worth it.

To get the necessaries out of the way early, yes, Saints Row: The Third Remastered is very much the same game people who played it the first time around will remember. Taking place five years after the events of Saints Row 2, we pick up with the titular gang during the height of their global fame, but it isn’t long before a botched job sees them need to vacate Stillwater, in favour of the sprawling city of Steelport to set up a new base of operations.

We say sprawling because the streets and areas featured here are a lot more densely populated this time around - especially when compared to the simulated version of Steelport we got in Saints Row IV. Whereas in that game navigating the world using superpowers meant that you hardly spent a time in a car or at ground level, in Saints Row: The Third Remastered you’re able to notice these minute details more. The folks over at Deep Silver obviously knew this, spending a lot of time reworking assets like building interiors, character models and gun aesthetics. The result is a game that definitely looks better than it did before, even if it’s not quite on par with, say, any of 2020’s ground-up remakes.

This doesn’t really matter in the grand scheme of things, though. It feels just as good to blow tanks up to cause as much financial damage as possible or parachute out of a plane as it ever did, only now explosions look more radiant and some nice HDR integration ensures that getting around the city feels immersive both at night or during the day. Saints Row, unlike GTA, was never about looking like the most realistic game out there, and even with all these improved visual tweaks, the series’ trademark cartoon-esque art style remains intact. 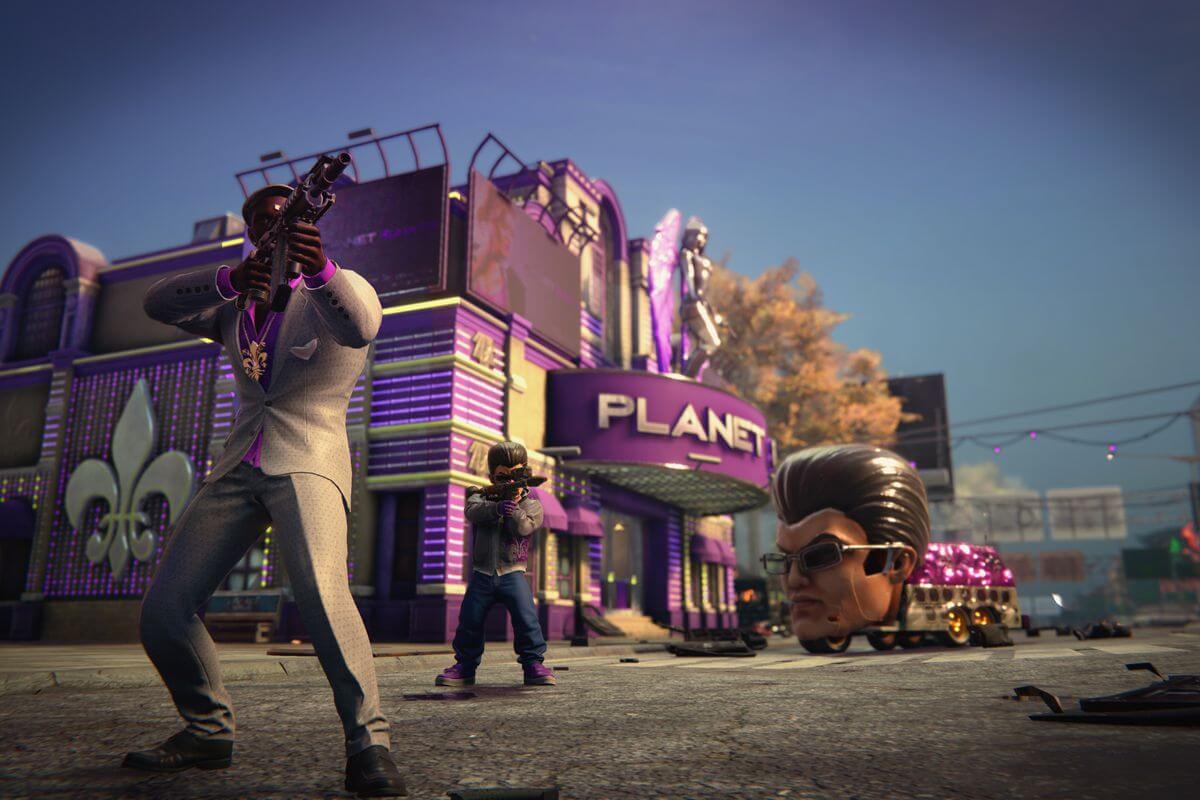 A technical drawback we did notice in our playthrough was some significant pop in. Put pedal to the metal in any of Saints Row: The Third Remastered’s vehicles to reach full speed and you’re sure to notice parked cars suddenly appearing from thin air. Such a visual hiccup is something you’d expect to see during the time of the game’s original release, so it’s a little disappointing that it couldn’t be solved for this remaster. Small glitches like this don’t outright break the experience. If anything, it’s perfectly in keeping with the franchise’s scrappy overall attitude.

Speaking of which, if you missed Saints Row: The Third the first time, it’s perhaps best described as: “What if an open-world game but ramped up to 11?”. A lot of your time is spent establishing the Saints in this new metropolis you find yourself in, taking down rival gangs to assert your reputation and causing rampant amounts of destruction as the situation demands. All objectives are assigned to your in-game phone, which you’ll use to upgrade your custom character, undertake missions and transfer any funds received from expanding your criminal empire.

There’s an argument to say that the Saints Row series never got better than this third entry. After all, the first two games seemed like they were riffing on the GTA formula a little too much and were left wanting for some identity. Then, Saints Row IV went almost too crazy by making you the president, packing in alien invasions and gifting you superpowers that made exploring the open world redundant. Saints Row: The Third, however, comfortably sits somewhere between these two extremes, serving as a care-free sandbox game that stays grounded enough to make your actions be meaningful while still oozing with outlandishness. Get used to seeing a lot of purple. 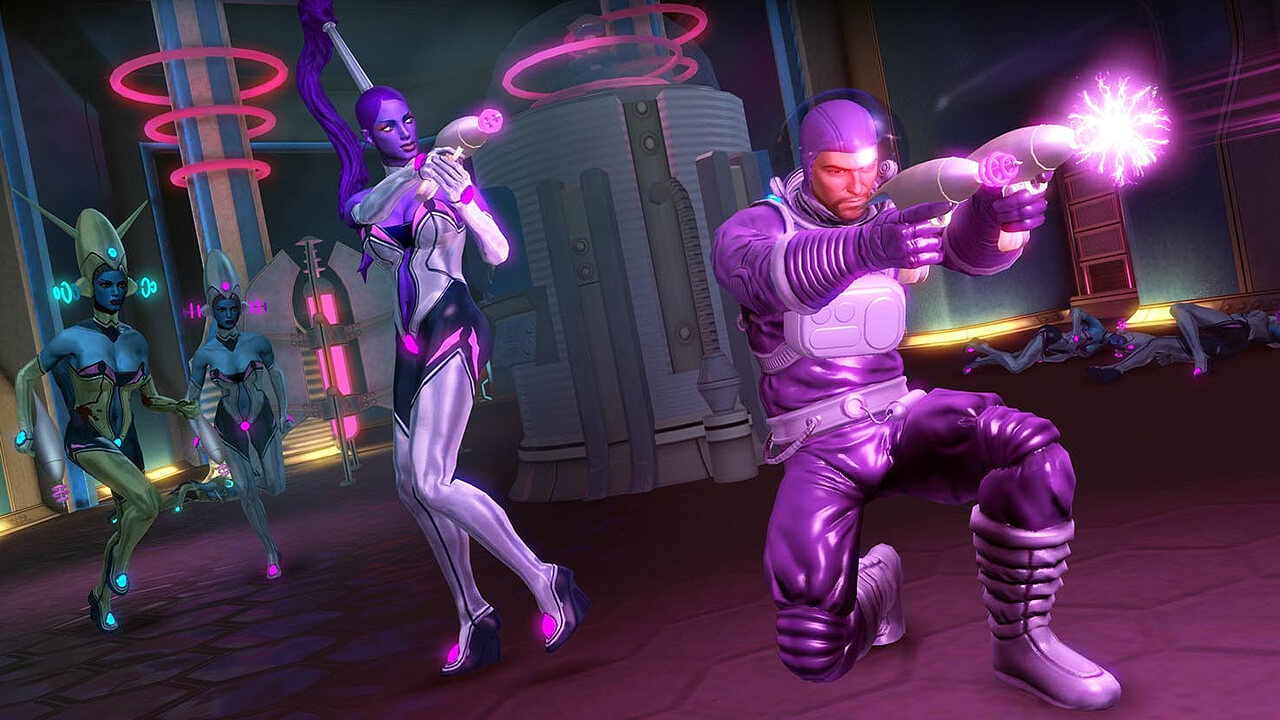 This being a re-release means that Saints Row: The Third Remastered features all the bells and whistles you’d expect. That means that the incredibly fun base game is included here, alongside all three previously released mission packs and any bonus items originally exclusive to the ‘Full Package’ edition. That meant I could spend the majority of my play through roleplaying as a badass Russian lady garbed in a nun’s outfit, which definitely made storming the strongholds of rival gangs an interesting experience.

What’s more, Saints Row: The Third once again features full online co-op, which is to be expected considering that this was also the case for the current-gen release of Saints Row IV: Re-Elected, but still worth shouting out as two-player support is such a rarity in open-world games these days. Odds are that any side mission or story set piece you thought was bombastic before only gets even more insane when you’re joined by another player.

Overall, Saints Row: The Third Remastered largely manages to retain what made one of the series’ best entries such a blast, while finding enough wiggle room to make some appreciated visual improvements. It may have taken its time getting here, but this PS4 and Xbox One version serves as a nice reminder to when sandbox games had a lot more attitude – and it’s never looked better.

The best price for Saints Row: The Third Remastered: