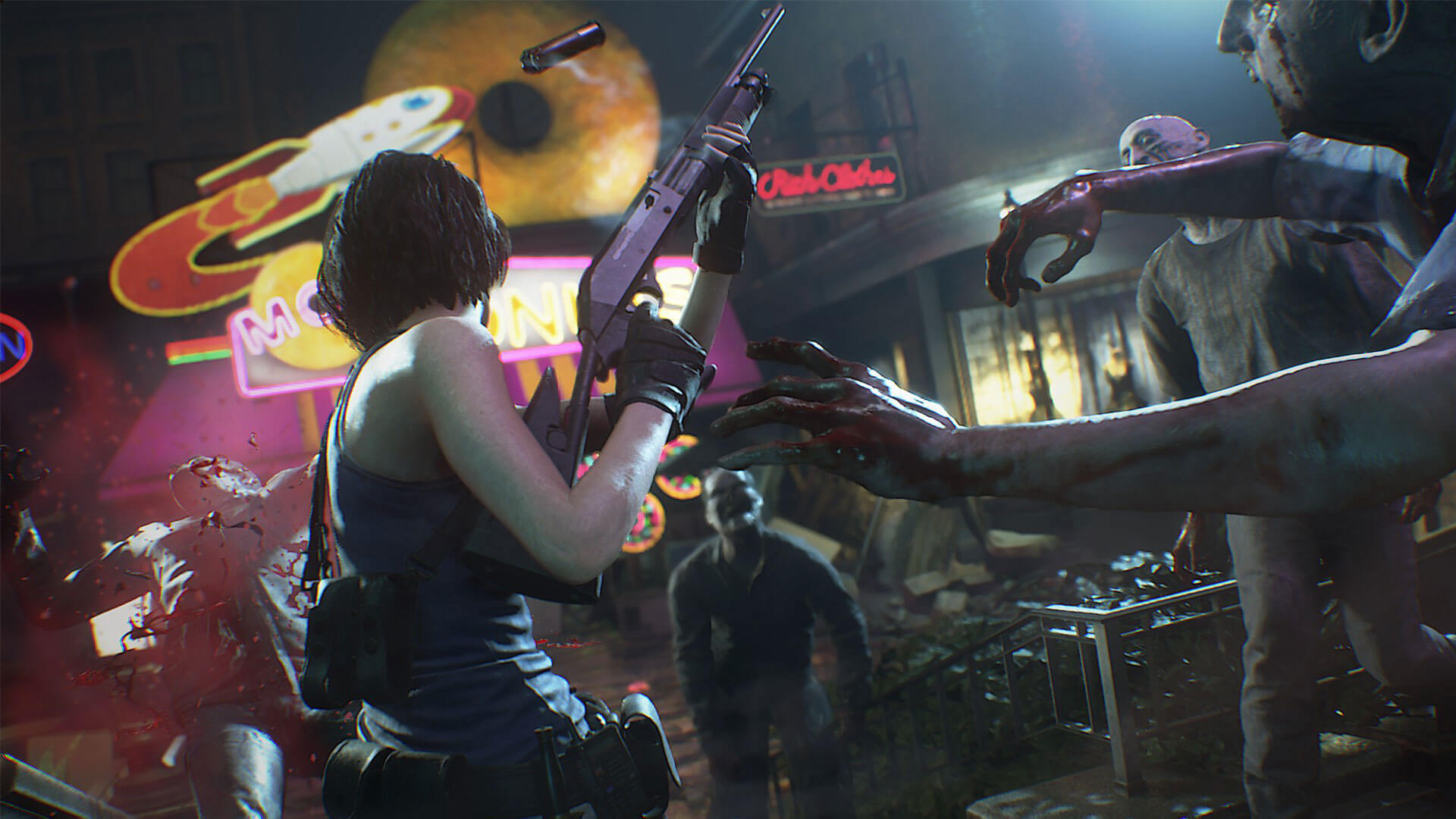 This ground-up remake of Resident Evil 3 seems like it should have been an open goal.

Riding on the coattails of last year’s inspired and deeply unsettling reimagining of Resident Evil 2, the time has now come for Jill Valentine’s parallel story in the series timeline (based on the 1999 PS One original) to similarly be born anew, only it seems that Capcom wasn’t quite able to trap lightning in a bottle twice. 2020’s Resident Evil 3 isn’t a bad game by any means, but it is one that fails to successfully build off the original game’s blueprint to deliver something more inventive and momentous. However, if taken at face value, Resident Evil 3 is still a tense, often bombastic fight for survival through the zombie-infested Raccoon City streets.

If you’re wondering why we’re yet to reference the terms “survival” or “horror”, that’s because Resident Evil 3 opts for a markedly different tact compared to the prior two entries. Whereas previously you were trapped within the confines of a zombie-laden spooky mansion or Raccoon City Police Headquarters, Jill Valentine is this time forced to fend for herself out in the open. Swiftly being pursued by the hulking Nemesis creature throughout the majority of this roughly six-hour campaign, Resident Evil 3 plays out far more linearly and as such you’re never really given the opportunity to get intimate with a single setting as before.

Despite this, Resident Evil 3 still does well to evoke a gritty and dark sense of mood, with the image of burnout cars on fire and buildings collapsing serving as frequent sights to behold. Poor character lip-synching outside of cutscenes aside, Capcom’s impressive RE Engine fully delivers here, with the various shambling zombies and later enemy types proving just as mushy to mow down than ever. Resident Evil 3 really is one of the prettiest games we’ve played in a while, and it’s even better when experienced in true HDR via a PS4 Pro or Xbox One X on a 4K TV.

Resident Evil 3 plays better than ever, too, which is important when you consider that it’s launched alongside an all-new multiplayer mode in Resident Evil: Resistance (more on that later). Jill handles similarly to Leon and Claire for the most part, only this time she has a few more tricks up her sleeve. For one, Capcom has been courteous and added a dedicated dodge button to make navigating between any slow-paced flesh-eaters a little easier. Then there’s the small touch of making your knife unbreakable this time around, which comes in remarkably handy when wanting to double tap any fallen zombies without wasting ammo. Small touches like this help Resident Evil 3 feel like a more refined experience gameplay-wise than last year’s entry.

As already mentioned, Resident Evil 3 may have dropped his name from the subtitle for this remake, but Nemesis once again returns as your infamous pursuer. Operating extremely similarly to Resident Evil 2’s Mr. X in the early hours, he’s much quicker, able to dodge and can be a real problem when trying to just generally going about your day in search of that next puzzle item or exit route. However, while Mr. X functioned as a truly independent AI that could crop up at random points – not too dissimilar to Alien Isolation’s Xenomorph - it’s disappointing to discover that Nemesis quickly turns out to be quite the pushover following your initial encounters with him. 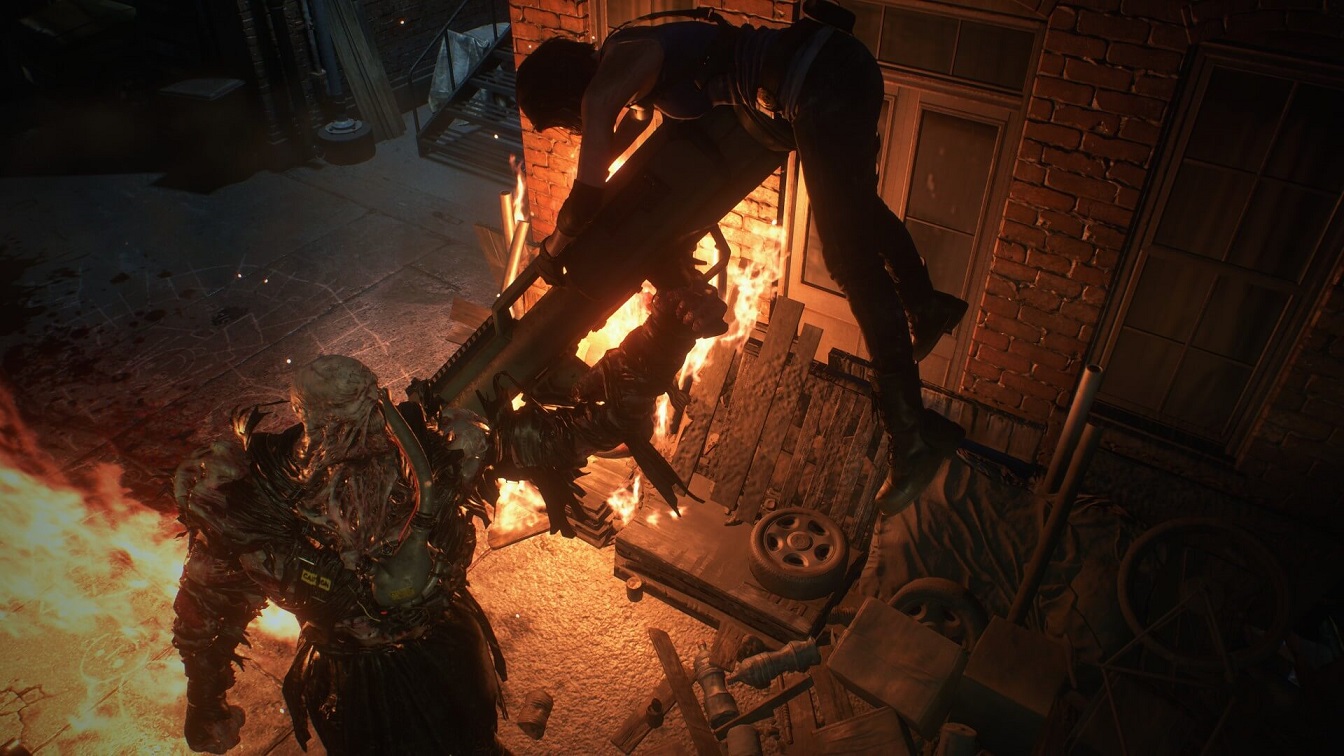 Rather than believably stalk you throughout Resident Evil 3’s handful of locations in real-time, it isn’t long before you realise that he acts as little more than a set piece machine, only really ever causing you problems in boss fights. This is perfectly in line with the more rollercoaster style of approach Resident Evil 3 is interested in, but highly disappointing compared to the true sense of dread that came from not knowing when or where Mr. X would appear in Leon and Claire’s preceding adventure. This might be how Nemesis was handled in 1999’s game, but it’s still surprising to see Mr. X beat Nemesis at his very own game when looking at these remakes.

More disappointment crops up in Resident Evil 3’s lack of puzzles and short campaign length. You see, while many modern players might groan at the “insert item X into object Y” design school of thought to be archaic by 21st century standards, a heavy emphasis on back-and-forth exploration and intricate puzzles has remained a hallmark of this classic series. Resident Evil 2 struck a perfect balance between tense over-the-shoulder gunplay while still retaining some of this, but such an equilibrium is nowhere to be seen in Resident Evil 3. To be fair, some puzzles do appear briefly, but it’s never long before you’re back to just gunning down undead hordes.

It’s a shame, because including puzzles that are slightly more involved possibly could have done a lot to offset Resident Evil 3’s short run time. We were able to complete the campaign on standard difficulty in just two sittings, clocking in at around six hours. There are several unlockables and various harder difficulties here to encourage you to go back in and face the nightmare again, but Resident Evil 3 does very little to cater to average players that want to get invested in a sizeable single-player story. What is here is explosively enjoyable while it lasts, but after Resident Evil 2’s dual campaign set-up last year, this follow-up campaign feels a little lacking – more so when you consider that sections from the PS One original are outright missing. 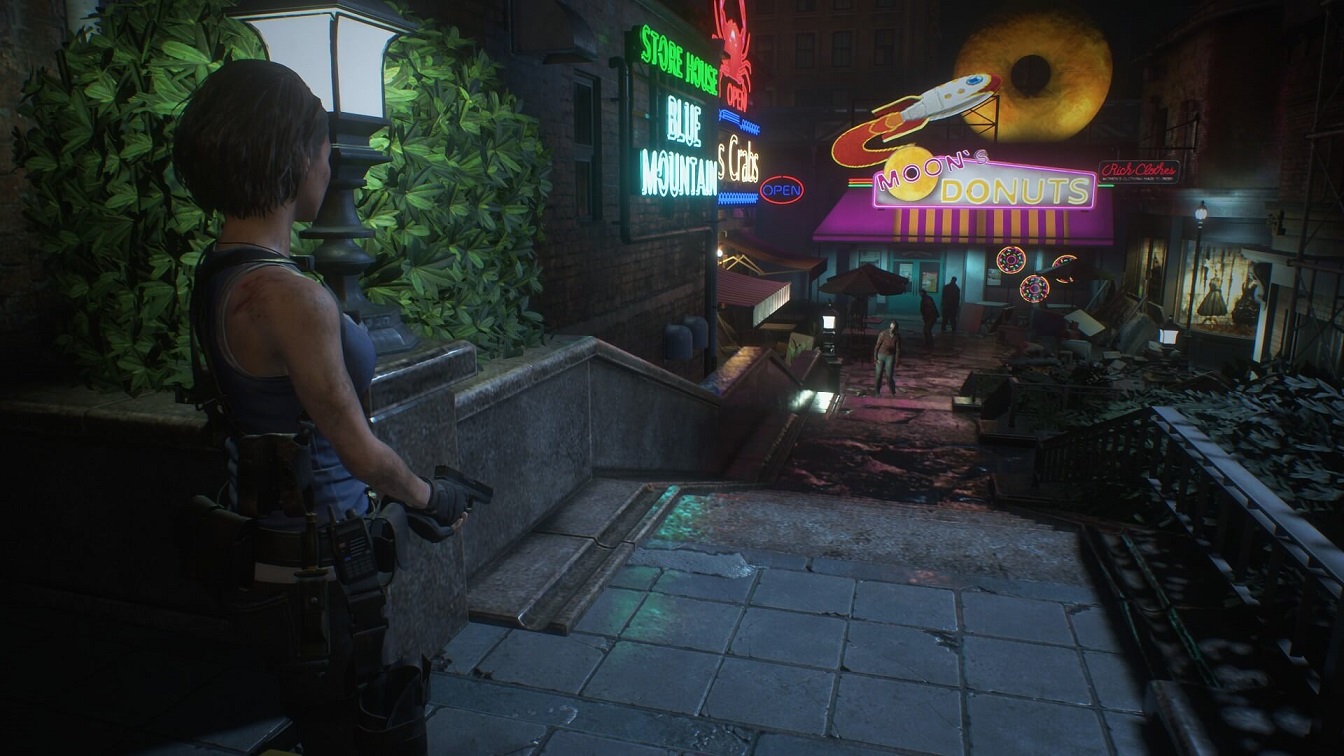 The value proposition of Resident Evil 3 is upped slightly, though, by the inclusion of Resident Evil: Resistance, a dedicated 4v1 asymmetrical multiplayer mode that really does show some potential. One player takes on the role of the mastermind, laying down traps and sporadically dropping zombies into a map in which the main team must try and survive. Only by working together can players controlling the group of teens hope to survive while completing their objectives. If Resistance sounds similar to, say, Friday the 13th or Dead by Daylight that’s probably because it is. However, given the two varied maps available to play on at launch and the much-appreciated extra presentation polish made possible with the RE Engine, Resistance is a nice online distraction.

To sum up, Resident Evil 3 might display moments of brilliance in terms of how it handles terror and action, but there’s no denying that this will disappoint players that enjoyed the Resident Evil 2 remake and were hoping for another homerun. The series timeline aside, we can’t shake the feeling that if the release order of these games was somehow flipped, Resident Evil 3 would have impressed right out of the gate with Resident Evil 2 ready to impress even more. However, as it stands, Resident Evil 3 is a brief, fun but no doubt flawed survival horror experience.

The best price for Residentil Evil 3: