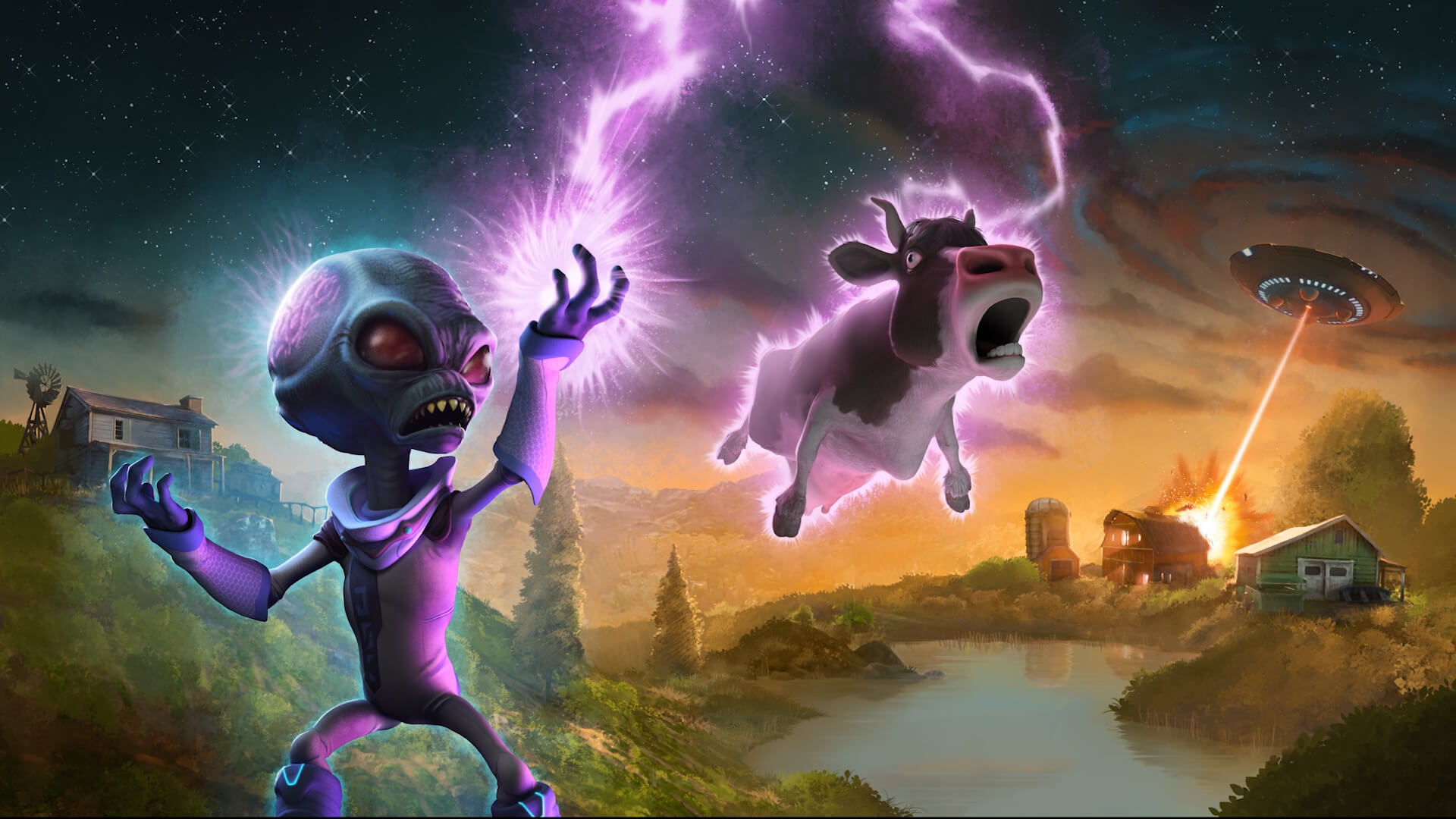 The original Destroy All Humans! released in 2005 was notable for just how different it felt at the time. Whereas other third-person action games seemed content to cast you as an overly butch hero perfectly equipped to lay waste to henchmen, aliens or monsters, here was a game that flipped the script and let you experience humanity’s ruthlessness from the other side, all while mixing in some tongue-in-cheek humour and satirising a post WWII America. I’m pleased to report that now, even 15 years on and with a new coat of paint, this perspective continues to be unique. And although some gameplay elements now feel outdated, new developer Black Forest Games has added just enough new to make this 2020 remake a worthy return trip – no anal probes required!

The tricky thing about any remaster or remake is weighing up what aspects to keep the same and what areas need “improving”. Already this year we’ve seen some games handle this task better than others, but for the most part Destroy All Humans! is a good example of how to do it right. This is very much the same alien invasion story you remember, with you as the gruff-sounding Crypto-137 (a member of the Furon alien empire) causing rampant destruction as you seek to enslave the human race. Only here it all looks and plays exactly how you remember, which is to say that the visuals have been completely redone.

The original Destroy All Humans! had its charm but going back to it now will see you greeted by a flurry of blurry textures, lifeless locations and assets that generally look kind of flat. Of course, age catches up to us all, so it’s nice to see this cult classic finally get the graphical overhaul it deserves – one that’s perfectly in keeping with its sarcastic sense of humour and political parody. Crypto himself looks better than ever, as does his scheming master Pox, but most impressive are the environments you’ll wreak destruction in. There were only ever six sandbox-style locations present, sure, but here in this remake they truly pop. Breaking into Area 42 for the first time, to use an example, is now as vibrant as it is explosive. The 50s suburb of Rockwell, meanwhile, is aptly moody thanks to some ambient lighting.

Outside of the revised aesthetics, Crypto’s attempts at harvesting human DNA and crippling the efforts of shady government agents is business as usual. For those unaware, this means visiting several semi-open hub worlds on a level-by-level basis, performing tasks like causing rampant destruction using alien weaponry, infiltrating secret facilities, and defending certain objectives all with some light exploration sprinkled in. Helping you do this is a varied suite of tools, like the extremely explosive Ion detonator and your classic electrifying zapper.

The original was by no means a long game, so to help extend this remake’s length Black Forest Games has been clever enough to add in new bonus objectives. These are unique to all 23 missions featured and provide you with additional XP when completed. They start off simple enough at first, like having you kill the farmer’s wife with a chicken, but eventually force you to get really creative. For instance, I still don’t know how to destroy a building with a human. While only a slight change and not even something you need even adhere to, completing these bonus objectives always forced me to tackle each mission more creatively, adding an extra layer of much-needed challenge that the original never had. 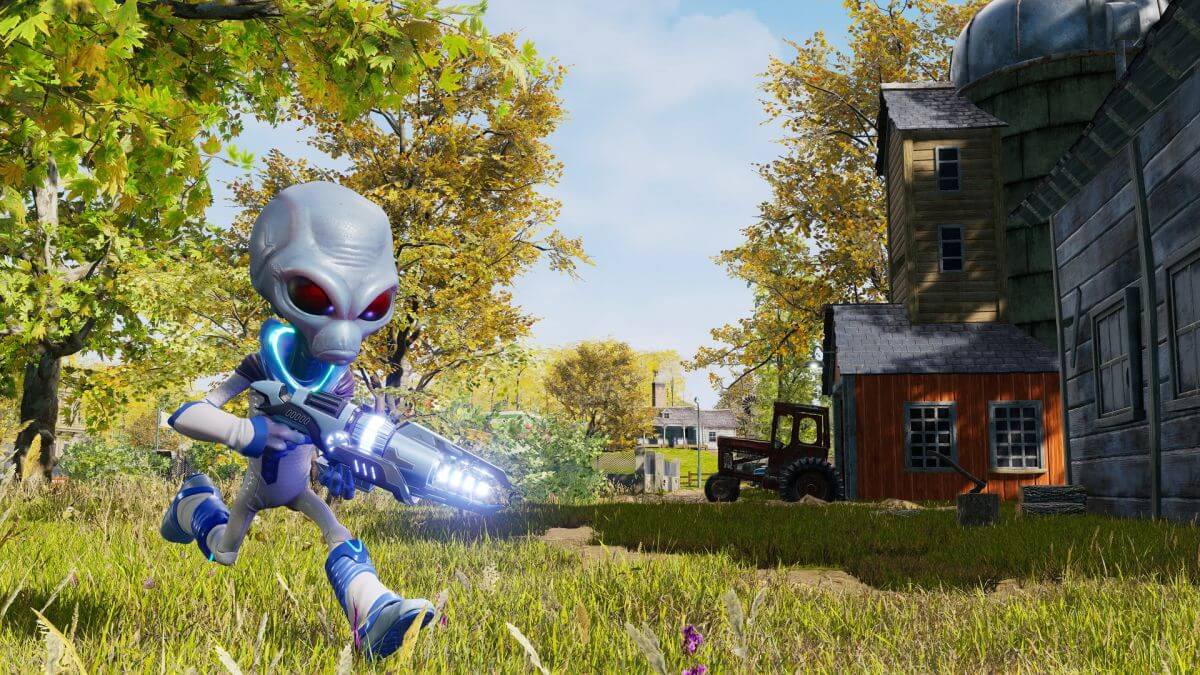 In addition to the weapons already mentioned, Crypto will sometimes need to take the stealthy approach and it’s here where his unique Furon abilities make a comeback. Fans of the first game will remember how key the Holobob for maintaining a disguise, for example, letting you hide out of plain sight for as long as you can keep scanning human brains. Then of course there’s Confuse or Distract, which works wonders when wanting to skirt past Holobob-foiling agents that could otherwise blow your cover. Skills like this combine with your guns to make Crypto the ultimate infiltrator – at least until certain scenarios demand devastation.

You’d think that pulling all this off would feel like a chore, but this new version of Crypto handles better than ever thanks to a revised controller layout and the ability to extract brains, use your PK to lift objects and shoot at enemies all at once. Whereas the original game made you choose between these, in the 2020 remake you no longer need to. Getting around on foot is now made easier than ever, too, thanks to an all-new dash ability that you can eventually upgrade into a skate. Tony Hawks should watch his back.

On the less glowing side of things, however, there are some areas where Destroy All Humans! shows its age, most obviously in its lack of an interconnected world. You see, rather than let you take on objectives as you please once in a location, after finishing your specific mission you’ll be forced back to the overview menu. This works well for those wanting to upgrade Crypto or his UFO’s abilities in between stages, but the structure does come over as a little rigid by today’s standards. It’s a small thing but worth mentioning, as so many times can Destroy All Humans! fool you into thinking it’s a game featuring a truly open world. You can, however, visit previous locations in free roam to hoover up missing DNA modules and complete challenges. 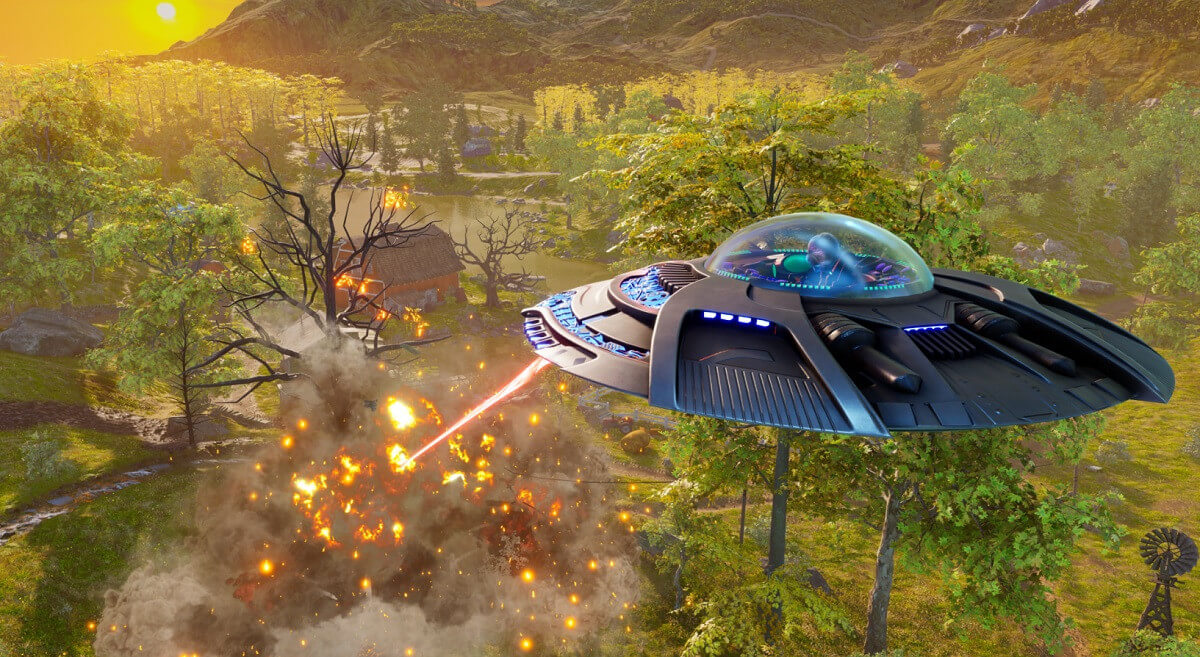 It's also worth mentioning that this 2020 version of Destroy All Humans! features a restored mission entitled “The Wrong Stuff” that was unceremoniously cut from the original. It occurs roughly just over half of the way through the base campaign in the Area 42 sandbox, and while by no means revolutionary or essential to the story it’s a cool scenario for devout fans to play through – especially considering it includes full audio and cutscenes. Narrative isn’t exactly what you come to Destroy All Humans! for, but this new scenario suits the game’s dry wit and sarcasm well.

Overall, this new remake of Destroy All Humans! is a rollicking success for the most part, maintaining the essence of the cult classic original while making a few new adjustments and incentives to help make this the definitive version. It might not do much to win over anybody who wasn’t able to click with it the first time around, but for lifelong fans and all-new players this 2020 remake is a close encounter you shouldn’t miss out on.

The best price for Destroy All Humans!