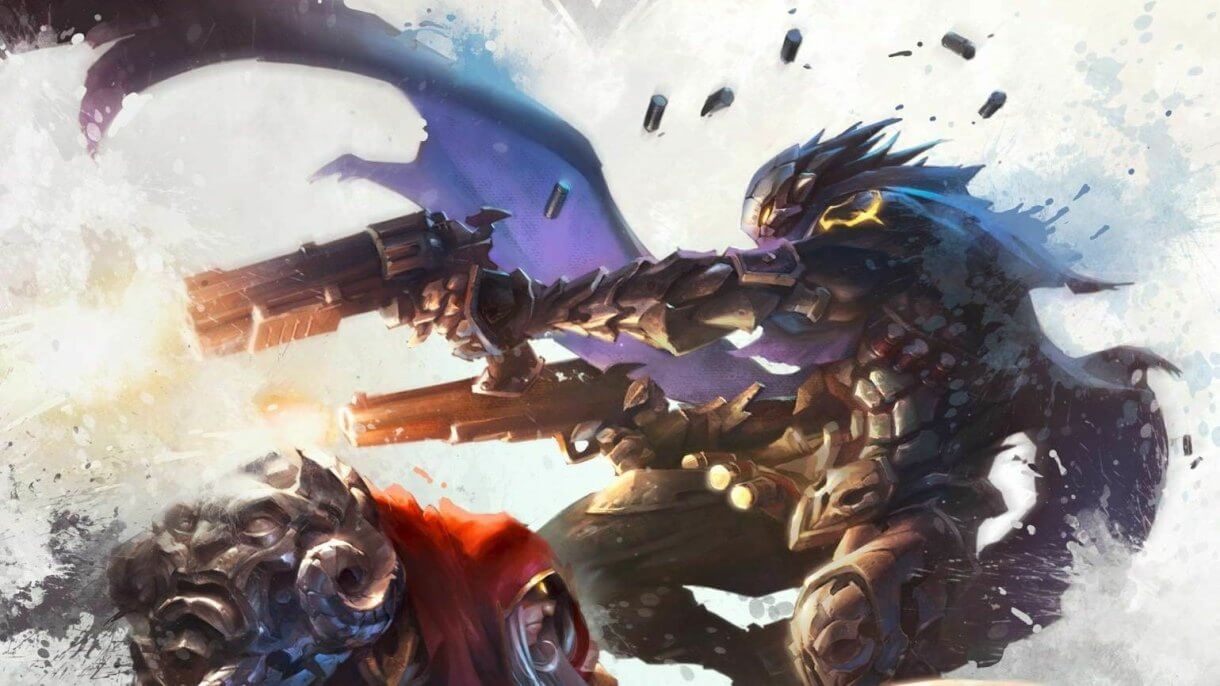 Fans of all things hellish and hack-and-slash have always been able to rely on the cult classic Darksiders franchise. With each game casting you as one of the four horseman of the apocalypse, the first three entries all introduced their own unique spins on the traditional third-person action format to help keep things interesting. However, for this fourth go around developer Airship Syndicate has pared things back a little to try something different, shifting the previous behind-the-character point of view to a fresh-feeling isometric perspective. It works for the most part, with Darksiders Genesis striking a healthy balance between platforming, environmental puzzle-solving and creative action, all whilst weaving a prequel tale set entirely before anything that’s come before.

The game may have already released late last year on PC, but now console players can relax knowing that the PS4, Xbox One and Nintendo Switch version plays just as flawlessly. The top-down perspective might be new, but Genesis is still very much the Darksiders franchise veterans will know and love. Add in the ability to now play as a pair for the first time, with one player stepping into the shoes of the original game’s War while the other inhabits new horseman Strife, and Darksiders Genesis represents a bold new step for the series. Let’s get into why…

While Darksiders Genesis might strike you as a kind of Diablo-style dungeon crawler at first, it isn’t long before those gameplay expectations quickly drift away, revealing a set-up that’s a lot more narrative-driven and familiar. War and Strife find themselves on a mission to bring balance between the realms of heaven and hell, which, as it turns out, is primarily done by blasting and slicing through as many demons as possible, upgrading both characters attributes and unlocking new skills along the way. Sign us up!

Luckily, these two playable characters handle wildly differently from each other, with War featuring a similar move set to the one he boasted back in the first Darksiders. He’s the one to go for if you’re a player that prefer getting up close and personal with foes, as he once again wields his mighty Chaoseaster sword to deliver wide-sweeping attacks and clear out legions of enemies all at once. Strife, meanwhile, allows you to approach the game almost like a twin-stick shooter, primarily due to him being equipped with two pistols that can switch between several different ammo types, dealing out death from afar.

The story is fairly generic, for the most part, but you forgive Darksiders Genesis for a lot of these faults due to how well-realised both War and Strife as characters are – especially in the latter’s case, where this game marks his first appearance. Liam O’Brien yet again lends his gravelly vocal tones to return as the voice of War, lending the broad-shouldered warrior a dark stoicism that’s in-keeping with where we see him go in the future timeline. Then there’s Strife, voiced by Chris Jai Alex, who takes matters far less seriously by comparison. He’s very much the loose cannon of the pair, introducing some much-appreciated levity to an adventure that would otherwise be at risk of taking itself too seriously. Both War and Strife play incredibly well off one another, trading interactions that make you appreciated the introduction of co-operative play even more. 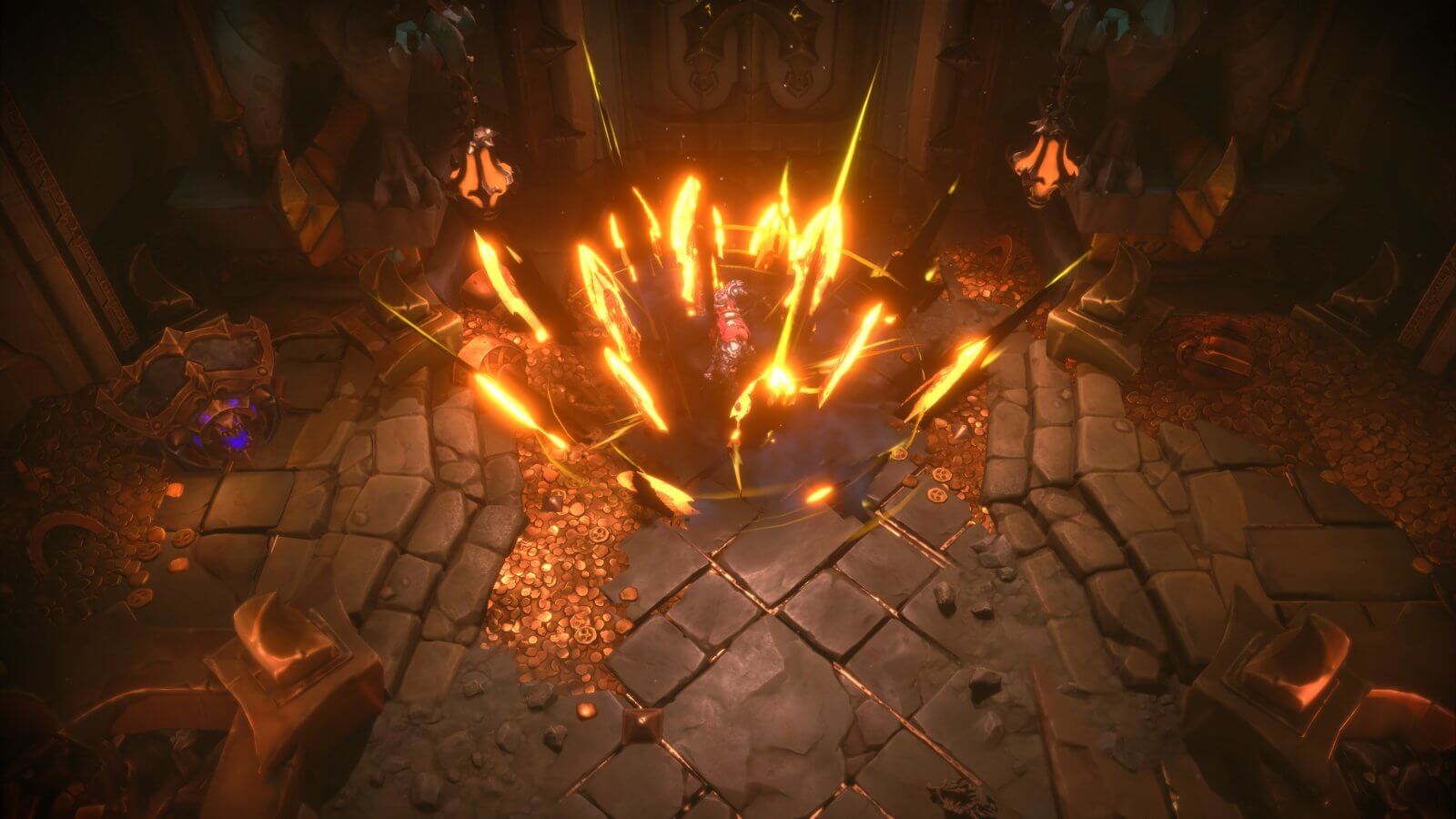 Speaking of which, and while its true that Darksiders Genesis plays perfectly fine for solo players (you can simply switch between the two at your discretion) it’s clear that this is a game best experienced with another. Not only because it’s good to have the unique powersets of both working in tandem simultaneously, but also because doing so helps you to maintain an edge over enemies and gives you to sets of eyes to seek out hidden secrets. This console version fully supports local couch co-op as well as online play, so there really is no excuse not to fight side-by-side.

Just as important as slaughtering bosses and minions, however, is the pursuit of various collectibles. Weapon upgrades and skill unlocks are something that the Darksiders series has featured before, but here in Genesis character improvement is randomised to a certain extent, thanks to a new concept centred around creature cores. Don’t worry, Vulgrim returns as your local shopkeep to sell you some additional buffs in exchange for souls, but often while laying waste to enemies they’ll drop what’s known as creature cores. These serve as Genesis’ primary method of progression, working as modifiers that subtly change the way you play when slotted into either War or Strife’s specific skill trees. Both horsemen become stronger over time depending on which cores you opt to slot in, gradually improving their health, wrath and overall attack potential.

When it comes to exploration and puzzle-solving, it’s true that Darksiders Genesis is a little more linear when compared to the previous entries. You see, the shift in perspective now always ensures that you’re able to see most of the map locations as you move through it, this means there isn’t too many times where you have to roam around unguided to get to your main goal. There are plenty of offshoots and excuses to venture off the beaten path, sure, but it isn’t too uncommon to find an area early on that you don’t yet have a particular item for. However, revisiting levels is made easy, as you can always select a specific area from the Void hub area. 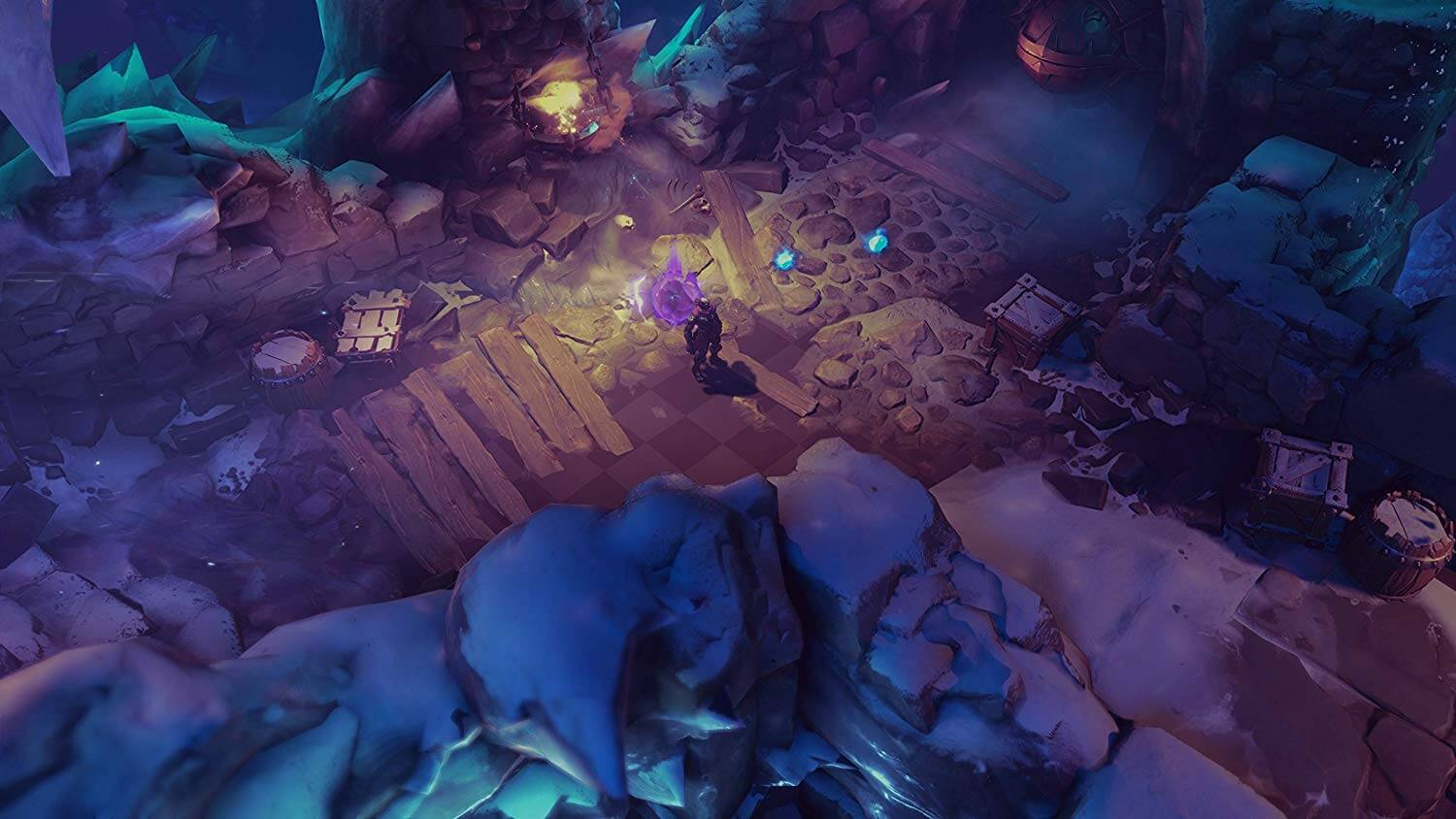 If there’s one area where Darksiders Genesis does fall down a little, it’s surprisingly in its control scheme set-up. You’d think that this being a top-down dungeon crawler would mean that the button layout would be simple, but Genesis packs in so many different features and mechanics that at first it all seems a bit daunting – especially when playing solo. You have your light and heavy attacks assigned to the face buttons alongside jump, okay, but then there’s options for summoning your horse, swapping ammunition types, dashing, engaging wrath abilities and so on. It’s no exaggeration to say that you’re required to hug your controller quite excessively, and several times at first did we get punished in fights early on while trying to remember how to pull off a simple manoeuvre.

And yet, Darksiders Genesis still acts as one of the most feature-complete and thrilling top-down hack-and-slashers we’ve played in recent years. The dynamic between War and Strife is engaging, the animatic cutscenes and environment detail eye-grabbing, but most importantly the act of butchering endless waves of angels and demons never ceases to be fun. Genesis is a smart twist on the established Darksiders formula we hope won’t just be related to spin-off territory, there’s too much that’s cool about viewing this world from above.

The best price for Darksiders Genesis