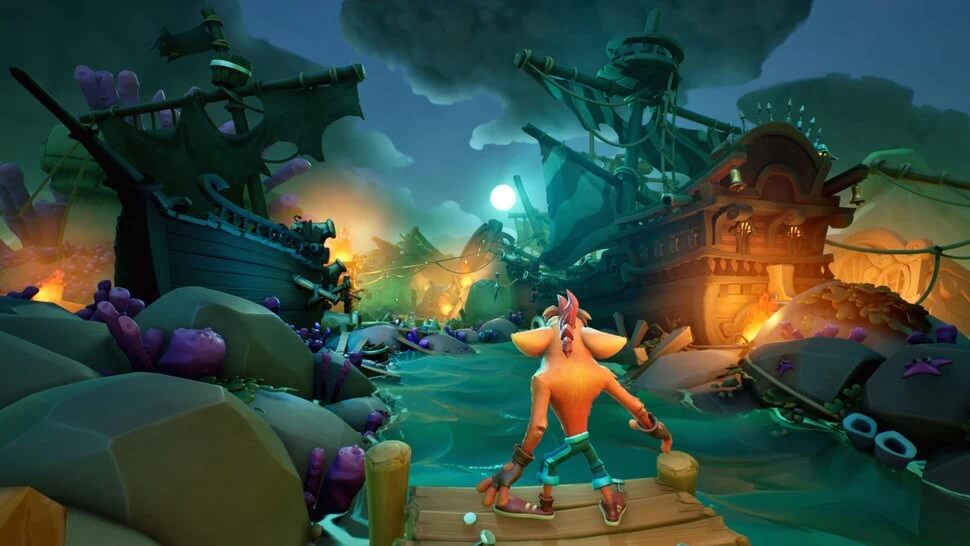 Never has a video game sequel received a more apt subtitle than Crash Bandicoot 4. Because while 2018's N. Sane Trilogy served as a nice reminder of how charming (and sometimes infinitely frustrating) the marsupial's original three outings could be, it is indeed “about time” this spin-powered 90s icon received the modernisation he deserves. Luckily, it has been well worth the wait. Crash Bandicoot 4: It’s About Time is a masterclass in 3D platforming design, with new developer Toys For Bob successfully retaining all the hallmarks of classic Crash games while still finding space to iterate and insert plenty of new. It’s a fine line, but one that Crash and Coco’s new 2020 adventure treads expertly.

It doesn’t take long for you to realise that it isn’t 1996 anymore. It’s About Time is an absolutely gorgeous game, at least on PS4, treating you to a glut of varied locations to spin and jump through that each tout an appropriately cartoony vibe. You begin in the incredibly familiar N. Sanity Island, featuring a duo of levels that wouldn’t look to out of place in Crash Bandicoot 2: Cortex Strikes Back, but even then, Toys For Bob aims to impress by having the game’s camera swoop and sweep around environments like nothing seen in a Crash game before. It might sound silly, but little touches like this are enough to place this classic platforming gameplay firmly in the 21st century echelon – and then the technical and mechanical improvements only keep piling up.

The time travel theme opens Crash Bandicoot 4 up to all manner of unique worlds and themes. One minute you could be speed-boating your way through a treasure-filled pirate cove, while the next you’re treading through a Mad Max-esque future wasteland set in an alternate dimension. There are 10 distinct overworlds to dive into and explore in total, all featuring levels overflowing with hidden secrets, bonus stages and challenges designed to have you replay them over and over again. And whereas previously your only real incentive for unlocking every gem and relic was bragging rights, It’s About Time does an excellent job incentivising you as every single level features an unlockable costume for Coco or Crash.

Much like was the case in the Crash Bandicoot N. Sane Trilogy, Coco is indeed playable from the very get-go across all 43 main levels. She is in effect just a palette swap for Crash himself, spinning and sliding in almost exactly the same way, but it’s nice to have the option to give the mad marsupial a rest every once in a while. Speaking of which, controlling your character feels exactly like it always did if not better, with explicit changes instead being made to obstacles rather than the handling in order to keep things fresh. A good example are the new crate types: whereas before you really only had explosive TNT and Nitro to worry about in addition to normal ones, Crash 4 introduces flame-spewing variants that can only be broken at a certain time.

The biggest (and most advertised) mechanical change to the Crash Bandicoot formula come from the new Quantum Mask abilities that tie directly into the story. Interspersed throughout several different alternate times and dimensions, it’s these four beauties that sees Crash and friends need to travel across various realities in the effort to prevent Neo Cortex’s latest dastardly plan. However, what could have been a throwaway plot strand, drastically shakes up gameplay on a level-by-level basis. 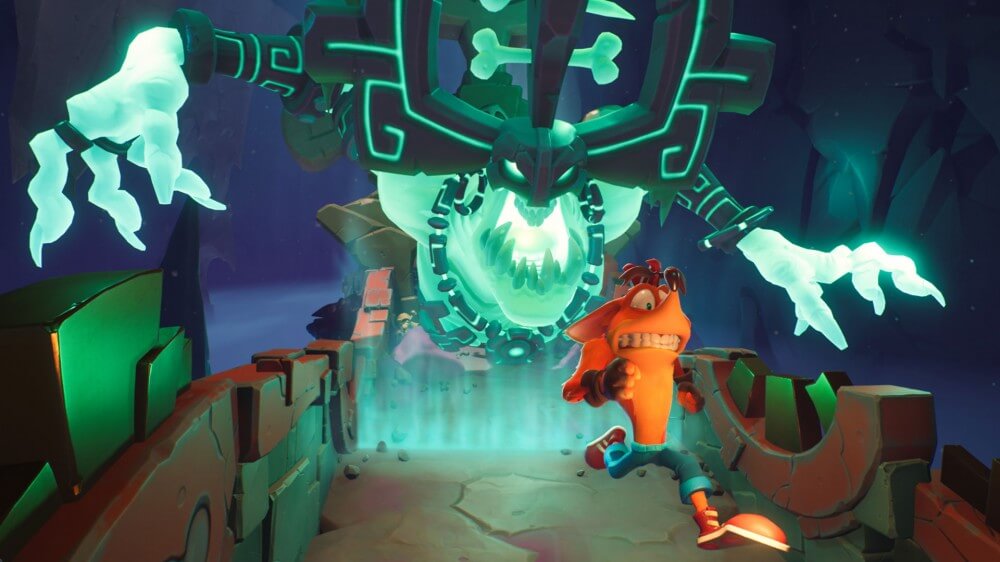 The first quantum mask you get to use early on, for example, lets you toggle between different realities, phasing pre-set platforms and crates in and out as necessary. It starts out rather basic at first before things quickly ramp up, until suddenly jumping up a simple cavern becomes quite the challenge. If you thought some elements of Crash’s platforming were hard enough, wait until you have to multitask like this. The second quantum mask lets you maintain a persistent spin and glide over platforms using dark matter, and these new mechanical traits carry on over to the next two.

You’d think that there being so many new gameplay elements would sully the established Crash Bandicoot formula or make things confusing, but Toys For Bob has done a great job at spacing them out enough that it never feels inundating – plus, it helps that all four Quantum Mask abilities can only be used in specific level instances. This small decision keeps the challenge fair, which is what you want when you repeat levels to secure unlockables or try to beat your record in the time trials mode. 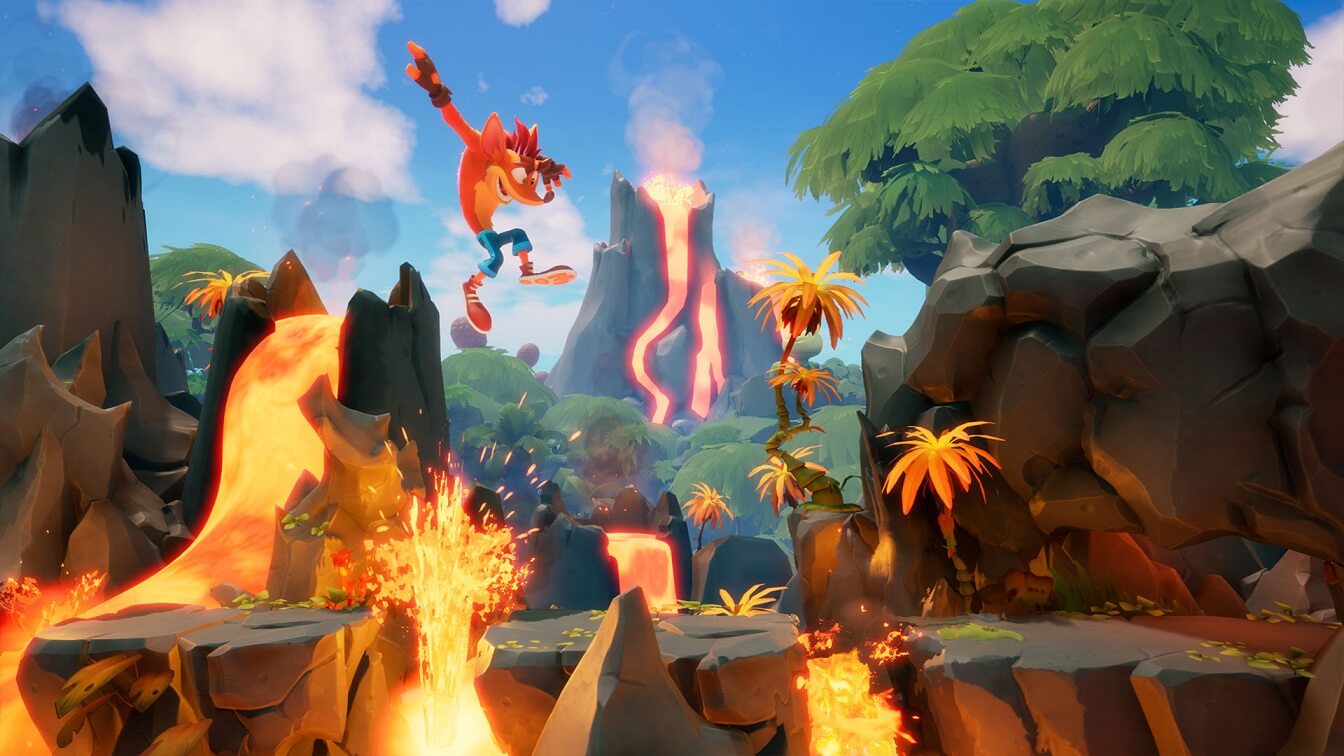 Players could have a good time simply playing through the 8-hour story, spinning through all 43 levels from start to finish just to enjoy the ride. However, any veteran Crash Bandicoot fan will tell you that it’s the hunt for relics and gems where the real game begins, and in It’s About Time there’s dozens of alternate and optional modes to check into. I haven’t even touched upon the incredibly tough Flashback levels, the N. Verted levels that let you play the main stages in reverse or the optional Tawny stages that shake up the gameplay by letting you play with a grapple hook. At first I thought Crash Bandicoot 4’s full £50 price tag a little steep, but it’s jam-packed with content.

Though still painfully tough and punishing at times, especially when going for 100% completion, Crash Bandicoot 4: It’s About Time is the true successor to Crash Bandicoot 3: Warped we’ve all been hoping for. The game successfully retains everything that made Naughty Dog’s original trilogy charming and beloved, sprinkling in enough new mechanical elements and gameplay shake-ups to prove that a classic-style 3D platformer can work in the modern age. Here’s hoping we don’t have to wait another 18 years for Crash’s next adventure.

The best price for Crash bandicoot 4: It's About Time:

Crash Bandicoot 4: It's About Time

Crash Bandicoot 4: It's About Time