Are Sony and Microsoft taking advantage of players during a financial crisis?

5 months ago by Phil Jones
0 Comments

GamingDeals.com have been aggressively monitoring the stock and releases of the new generation of consoles since they launched in late 2020.

It has been almost two years since the launch of the PS5 and Xbox Series X consoles. The release of this new generation has been unprecedented, with stock being a huge issue since the onset due to the ongoing global chip shortage.

Looking at the console release data it’s apparent that there has been a lack of official bundles for the newest consoles. Comparatively, in the same timespan during the last console generation (PS4 / Xbox One), there were an array of options when it came to official bundles.

What the comparisons find

As outlined in the data above, the PS4 and Xbox One had a combined total of 27 bundles available for users to purchase. If we compare the same time frame for the Xbox Series X and PS5 there are just 3.

Within the first year of the PS4 and Xbox One’s release, both consoles had limited edition versions. These took the form of the Destiny PS4 and the Call of Duty: Advanced Warfare Xbox One respectively. Yet, as of August 2022, the PS5 has yet to release a special edition console. The Series X did release the Halo: Infinite limited edition that came out in November, which roughly fits the pattern that was established with the Xbox One.

However, the overall lack of bundles on both sides is very unusual when compared to the last generation’s release cadence. 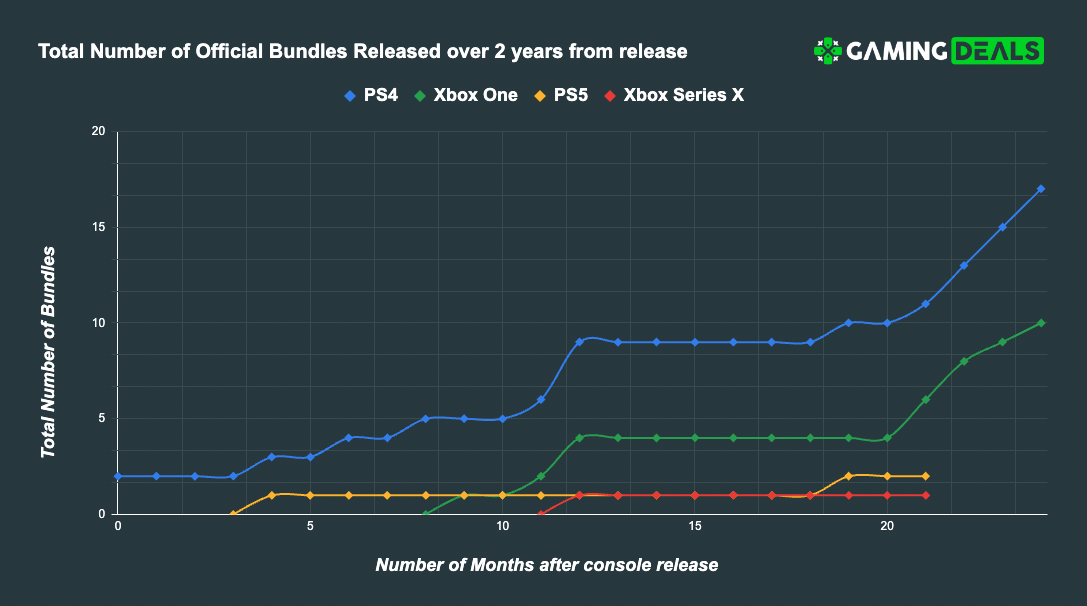 Why there are so few official bundles

Stock availability has been a big hurdle in the distribution of the new generation consoles. Bundles are typically used in order to make the purchase of a console more enticing, but neither the PS5 nor the Xbox Series X has required aid in selling out.

Until recently, it has been hard for customers to get their hands on a PS5 console.  The change has been due to the release of the PS5 Horizon Forbidden West bundle which has been in stock more frequently, often taking days to sell out rather than minutes. The RRP for this new bundle is £499.99 / $549.99, offering no real savings from buying the console and game separately.

The stand-alone PS5 disc console retails £50 / $50 cheaper (£449.99 / $499.99) and is still proving very difficult to get hold of, therefore if you want a PS5 you're going to have to pay above RRP for the console including a game that potentially you might not even want.

For the previous generation of consoles, Microsoft and Sony would serve bundles as a deal for customers, essentially giving them the console and a game (or two) for free. However, we have yet to see an official bundle for the Xbox Series X or PS5 with any financial discount, exploiting the demand for their consoles.

The situation is made worse by retailers creating their own bundles. Several stores are further increasing prices by only selling the newest consoles with accessories such as headphones or additional controllers. This not only makes it even more expensive than it already is for a customer to purchase a new console but also has the secondary effect of keeping the bundled accessories at an inflated price in order to make the “deal” more enticing. With every party wanting a piece of the lucrative console market, all sides are willing to take advantage of the stock shortage, which ends up harming the consumer in an already difficult time.

To make matters worse… Sony announced a price increase on the 25th August for the PS5 console across a number of regions including the EU and UK, but we’ve yet to see the new price applied to existing stock across our partner retailers.  It will be interesting to monitor the price of bundles once the new pricing structure is applied.

How the lack of official bundles may affect special edition consoles

While it’s clear that the Xbox Series X will still have limited special editions, as we’ve seen with the Halo Infinite bundle, it can be presumed that the same may not be true for the PS5. It’s unusual that after almost two years on the market the PS5 doesn’t have a special edition version, and taking into account that the console’s faceplate is customisable, it’s possible that we may never see a special edition PS5 during the console’s lifespan.

Effects on the market

These are unprecedented times not just for consoles, but the gaming market as a whole. While the future is unclear, there are some assumptions that can be made as to how the limited selection of bundles may change the market as the year goes on:

Could Sony and Microsoft be doing more to help? Let us know your thoughts below...

Update 26th September 2022: Sony have now unveiled two new FIFA 23 Bundles releasing on September 30th 2022. There will be two SKUs one for the PS5 Standard edition and another for the PS5 Digital edition.