5 Reasons To be excited for Dying Light 2: Stay Human

11 months ago by Scott Stowe
0 Comments

The world of gaming used to be awash with titles featuring undead flesh-eaters. Dead Rising, Left 4 Dead, and even Resident Evil inundated us by forcing us to slay hundreds upon hundreds of zombies as part of our favourite pastime in order to survive. However, zombie video games have been surprisingly quiet lately. Thankfully, Techland’s long-awaited Dying Light sequel is almost here to change that.

First announced way back at E3 2018, Dying Light 2: Stay Human promises to be a bigger, bolder and more expansive open-world zombie bashing game. It does so by setting players on PlayStation, PC and Xbox off within the confines of a new city overrun by infection, alongside a boatload of new RPG features and a narrative that promises to adapt according to your decisions. Struggled to get hyped for its release this Friday? We’re here with 5 reasons to be excited for Dying Light 2: Stay Human.

A sequel 7 years in the making

Dying Light 2: Stay Human may have first been revealed in 2018, as mentioned earlier, but fans of the original will know that the first game released on PS4 and Xbox One as far back as 2015. That means it’s been a staggering 7 years in between game releases. Now, while we acknowledge that open-world games of this ilk take a while to make, Dying Light fans have still been left waiting a long time for this gorier follow-up. Much of this is down to the first Dying Light’s multiple years of continuous updates, DLC and support, but now there’s a new infected city to explore.

Dying Light 2 moves events away from sun-kissed Harran, all the way to a nondescript European city suffering a far more aggressive viral outbreak. Luckily for you, what’s left of society has managed to adapt somewhat in the 20 or so years since the last game’s events, but there’s still various evil factions and hordes of zombies standing in the way of your objective. Speaking of which, this souped-up sequel casts you as new hero Aiden Caldwell, dropped into the environment in search of his sister. Will his story have been worth the 7-year wait? We certainly hope so.

Dying Light 2: Stay Human differs from a lot of zombie games of old in that it’s all about freedom. Are there missions to complete, characters to meet and set storylines to follow? For sure. Here, however, the pressure is always off, as evidenced by developer Techland revealing that the game holds 500 hours’ worth of content for players who want to see and do everything. This just goes to show how expansive this particular zombie game promises to be, as evidenced by the much larger map, abundance of side quests and several weapon crafting recipes that ensures no playthrough ever needs to play out the same.

One of the major ways Dying Light 2 differs from other zombie games is in the aggression and different behaviour the undead display. In the day, for instance, the hordes of flesh-eaters remain rather docile and easy to dispatch (as they did in the first game). Certain missions and objectives can only be finished during the dead of night, however, and it’s in these instances where you’ll be forced to face off against bigger, brute-like zombie forms. Question is: Are you brave enough to venture out alone? 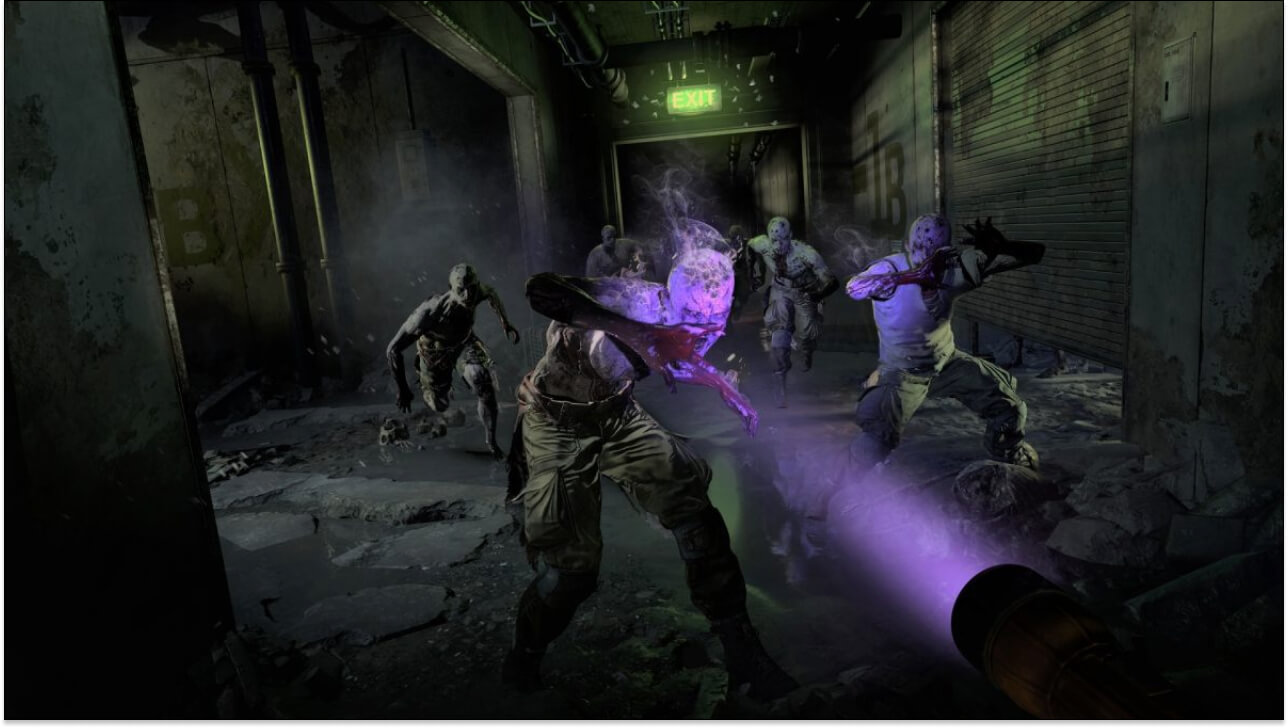 The original Dying Light from 2015 was applauded for its mixture of melee-focussed combat and parkour traversal. That last part has been stepped up substantially for this sequel, largely thanks to the addition of a paraglider that lets you take off into the skies to view the city from an all-new perspective. Whereas before your only option of making it through a horde was to face them head on, now you’re able to clamber up to a high point on the map, find a source of uplift and take on to fly past any shambling troublemakers. Of course, this won’t always be easy to pull off, but it remains a whole new method of traversal not seen in many open-world zombie games.

Paragliding is introduced alongside plenty of returning exploration methods. Because when you’re not descending upon enemies from on high, you can use zombies themselves to get around by leaping over their heads. This combines with Aiden’s ability to mantle onto and over almost any structure, which – when used in tandem with your trusty grapple hook – helps make the city a playground of sorts. Getting around in Dying Light 2 will never be a chore, and is instead something to look forward to.

As before, melee weapons are your primary method in which to dispatch any zombies or human enemies silly enough to take you on. However, whereas the first game eventually gave in and introduced a boatload of guns towards its end, Techland has been clear that this won’t be the case for this sequel. Dying Light 2: Stay Human instead does away with the firepower to rather place emphasis on swords, hammers, and all manner of other blunt instruments you’ll be able to customise and make stronger using any resources you’ve gathered.

Purely focussing on melee weapons forces you to consider your actions, planning your approach before getting up close and personal with enemies. That’s why learning how to appropriately counter and block incoming attacks is just as important as timing your heavy swings, and knowing when to poke and jab with speed. For all these reasons and more, Dying Light 2: Stay Human looks to provide a more thoughtful brand of up-close combat compared to other first-person games out there. 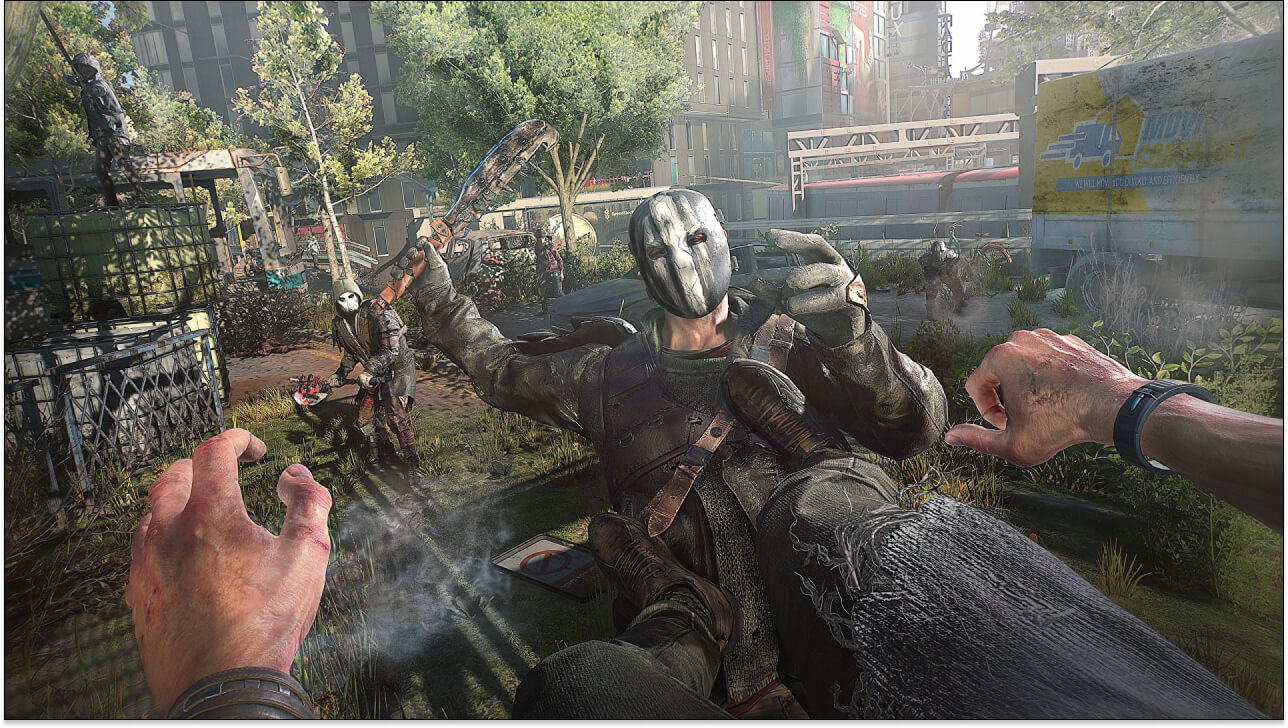 Dying Light 2: Stay Human is entirely playable solo, setting players off on a well-drawn single-player narrative with a distinct beginning, middle and an end. However, even the first game proved that mowing down legions of the undead can be more fun with friends and the same can be said for this sequel. Whether you're playing on last- or current-gen consoles, Dying Light 2 supports full co-operative support for up to four players online.

Techland has been on record as stating how the entire game can be played and finished with up to three other players. This means that no part of the game (aside from the initial) prologue cannot be played in online co-op. This looks to feed into Dying Light 2's new RPG-like character class system, which will allow players to enjoy different abilities and buffs. The latter is sure to make every play session more enjoyable as everyone will play slightly differently. Simply put: A zombie game is good, but a zombie game with friends is even better.

We've included below our best prices available for Dying Light 2: Stay Human for each platform to help save you money if you're interested in picking up the game.