1 month ago by Chris Impey
0 Comments 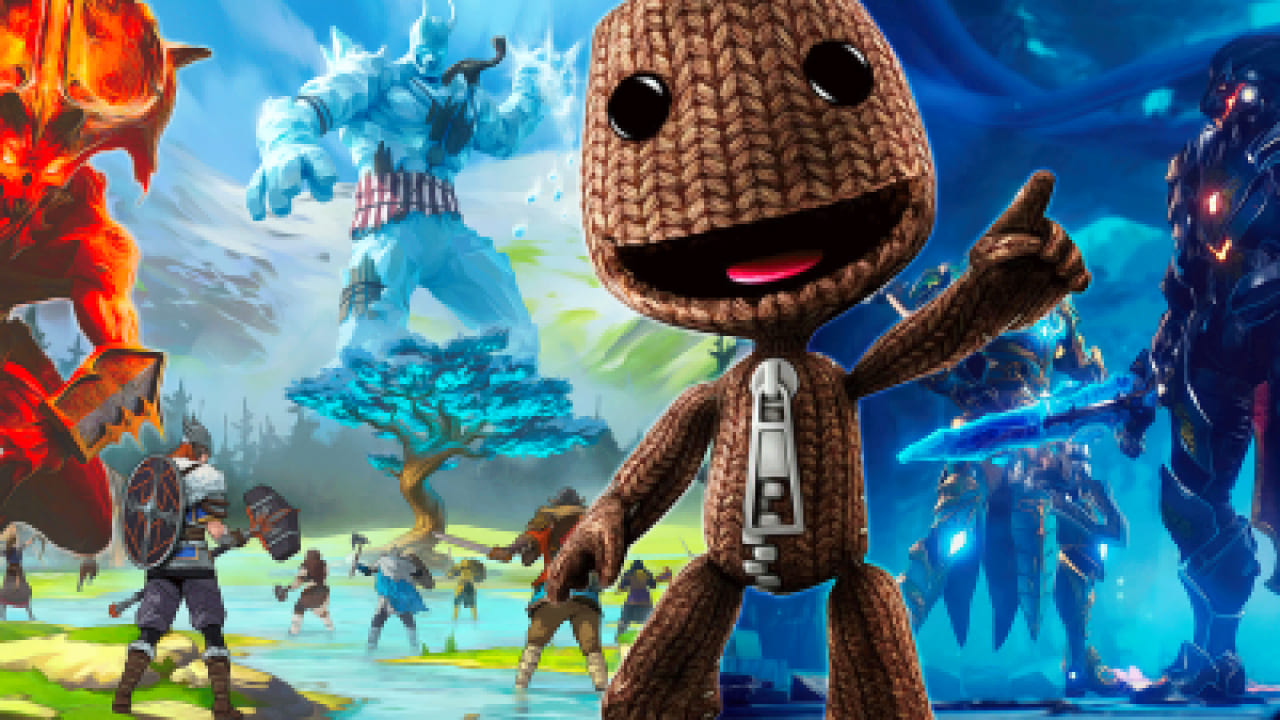 Sony's eagerly anticipated next-gen console has now been out in the wild for almost a year now (despite scarcity), but many co-op preferring players are still left wondering what the 10 best 2 player PS5 games are exactly. Previously, it being so early on within the console's lifecycle meant there wasn't a great number of multiplayer games to dive into, but the selection only continues to grow more and more as the months go on. Don't forget that 99% of the PS4's library already works on PS5, too. Knowing this means there's no shortage of great 2 player PS5 games if you include both libraries. In this list we'll be covering the best of both!

It's worth keeping that in mind when reading the following list of what we think constitute the 10 best 2 player PS5 games. Luckily, we also tend to include online 2 player games as well as those that can just be played locally or via split-screen, so regardless of your preference there's sure to be a handful of co-op games to enjoy alongside friends.

Here's our current list of the best 2 player PS5 games.

Top-down hack-and-slash action meets challenging survival game in the Norse-inspired Tribes of Midgard, which tasks you with protecting the sacred seed of Yggdrasil by scavenging, upgrading, and defending your territory. Attempting this alone is fun, sure, but even better is jumping online in glorious 10-player co-op to take on all kinds of mythological beasties. It's quite a new 2 player PS5 game but already it's been well supported with a battle pass system and new updates, encouraging you and friends to venture back to this viking adventure over and over again.

The FREE PS5 upgrade for Borderlands' third official go-around introduced 3 and 4-player split-screen playable locally and 4K visuals at 60fps when playing the single-player campaign. This cell-shaded looter-shooter already proved itself to be one of the most fun and chaotic ways to share shooting antics with friends back on PlayStation 4, so it shouldn't be a surprise to learn that it also makes our list of the 10 best 2 player PS5 games. Borderlands 3 continues to be supported with new events and weapons, all of which translate seamlessly to PlayStation 5 - it's still the definitive co-op shooter on next-gen.

Letting up to three friends embark on an epic ancient quest while engaging in deep melee combat, Godfall was one of the most exciting PlayStation 5 launch exclusives. It might not feature local co-op, but thanks to three-player online you and others can engage on a sprawling hunt for loot as you take down endless hordes of evil forces. All this you do in the hunt for loot, fleshing out your character build with better improved armour and better weapons. All this makes it one of the best 2 player PS5 games worth keeping an eye on.

The third game on this list designed to incentivise players by having them finding new and improved gear, Outriders is Square Enix's sci-fi loot-shooter that sees you and a squad of two others gun down legions of alien enemies in glorious drop-in-drop-out co-op. It's a bit like if Mass Effect and Borderlands had a baby, partially because it's entirely set within a universe ripe for rich storytelling but the shooting is equally satisfying.

The game has also seen some pretty large updates making it overall a more enjoyable experience. Adding features such as a transmogrification system to style out your character however you want and adding new end-game content/rebalancing the old content to make finding that legendary gear all the more satisfying. There is also an expansion aptly named Outriders Worldslayer coming on the 28th June means theres exciting times ahead for those of you that want to jump into the world of Outriders. It makes our list of the best 2 player PS5 games because the powers of each class is extremely fun to use, and working your way towards better gear and upgrades with friends is an extra-terrestrial delight.

The most recent release on this list is Gearbox's latest big title Tiny Tina's Wonderlands. Released on PS5 March 25th Tiny Tina's Wonderlands is an exciting departure from Borderlands whilst still maintaining the charm, gunplay and art style of the series. Tiny Tina will be your dungeon master as you play through a tabletop inspired game board between missions to get into the looter shooter action you know and love. As with any Borderlands title this game is best-enjoyed co-op with friends as loot showers down all around. Tiny Tina's Wonderlands has a lot more focus on melee and spells than previous Borderlands titles and with 6 new classes to choose from and combine via multiclassing this is easily going to be one of the best 2 player PS5 games when it releases.

Call of Duty: Vanguard is the latest entry in Activision's behemoth franchise and whilst its campaign does not support local co-op there is plenty of other game modes that can be enjoyed with online co-op and via matchmaking. This of course includes the beloved zombie mode which is Call of Duty's premier co-op experience as you play with friends to fend off waves off undead. The zombies mode in Call of Duty Vanguard is as packed with content as ever featuring tonnes of weapons, power-ups and also multiple maps to choose from. For those of you that are not fans of the zombies game mode there is plenty of fun to be had in the classic online modes of Call of Duty such as team deathmatch and headquarters. If first-person shooter variety is the spice of life Call of Duty: Vanguard has you covered as one of the best 2 player PS5 games for you and a buddy to give a shot.

4. Overcooked! All You Can Eat

The culinary chaos continues on PS5 by way of Overcooked! All You Can Eat, a chef-centric compilation that bundles together the first two Overcooked! entries alongside every morsel of DLC ever released. It really is a buffet's worth of co-operative catering to indulge in, tasking you and another payer to cook, serve and clean across a range of wacky stages while keeping your cool. One minute you can be trying to keep orders coming through while on a hot air balloon, the next you'll be sweating it out amidst hot lava. Communication is always key to reaching chef stardom, in a 2 player PS5 game that is a must-play for quirky co-op fans.

There's an abundance of isometric high-fantasy games that let players slash through hordes of orcs, witches, and demons together. However, if you're seeking an authentic experience on PS5 set in the popular Warhammer universe, Chaosbane turns out to be a hack-and-slash delight. Originally released for last-gen consoles, Slayer Edition lets up to four players fight side by side as a handful of different classes, featuring enhanced visuals and all the additional content previously released. Warhammer Chaosbane: Slayer Edition is the ultimate version and one extremely fun 2 player PS5 game.

Breaking away from the LittleBigPlanet idea of Play. Create. Repeat. Sackboy: A Big Adventure sees our eponymous hero venture into true classic 3D platforming territory. It is a clear harken back to the likes of Spyro, Crash Bandicoot and other mascots, only here you can explore and bash your way through a vibrant world exclusively on PlayStation 5 alongside three other friends. While entirely playable alone, Sackboy: A Big Adventure makes our list of the 10 best 2 player PS5 games because it's a co-operative platformer ideal for the whole family.

If you and a friend have ever wanted to star in your own Honey I Shrunk the Kids movie, this latest co-op adventure from Hazelight Studios should scratch that itch. It Takes Two is a 2 player PS5 game that looks and plays great, especially since you play as two main characters that have been shrunken down to the size of an insect. Returning to normal size and getting back to their daughter in time requires them to navigate gardens, household equipment, toys and more, all while working together to solve various creative puzzles. It Takes Two is co-op only, but plays great on Sony's next-gen console in either local or online co-op hence why it ranks high on this list.

You can always depend on EAs annual football effort to kick back with friends and play a couple of matches either locally or via online multiplayer. Thats why, despite not actually being released yet, we feel comfortable placing it on this list of the 10 best 2 player PS5 games. New this time around for FIFA 22 is what's known as HyperMotion, a new form of technology that captures real-life player movements to depict them in game more realistically than ever before. Whether squadding up in the same team or playing competitively, the PS5 version of FIFA 22 is sure to be a treat with friends.

Though developer TT Games has tackled every mainline Star Wars movie and LEGO-fied them into a video game before, LEGO Star Wars: The Skywalker Saga is a complete reinvention of all nine moves. Because of this, teams of two with a fondness for that galaxy far, far away can play through the epic saga using an all-new lens. Sporting that trademark whimsical humour and fun gameplay almost every LEGO game is known for, LEGO Star Wars: The Skywalker Saga will almost certainly be one of the best 2 player PS5 games upon release.

Though Call of Duty: Black Ops Cold War's campaign doesn't feature co-operative multiplayer, it does feature the return of one of the franchise's classic modes: Zombies. It's here where teams of four must gun down legions of the undead while surviving for as long as possible, and this latest incarnation of the heavyweight military shooter boasts all manner of improvements. Cold War's Zombies mode also looks better than ever as the first entry on PS5, making it one of the best 2 player PS5 games

Three years after Dirt 4 skidded onto consoles, Codemasters' rally-themed off-road racing series makes a return on both current and next-gen systems. And not only that, but Dirt 5 launched on PS5 as one of the most complete driving experiences yet, being the perfect platform in which to put pedal to the metal for co-operative players thanks to four-player drop-in and drop-out split-screen multiplayer. This is in addition to a narrative-focused career mode featuring the voice talents of Troy Baker and Nolan North. No new console is complete without a racer and Dirt 5 instantly becomes one of the best 2 player PS5 games, too.