The COVID-19 pandemic has resulted in an unprecedented rise in UK online demand for video game consoles, data collated exclusively by us here at Gaming Deals can reveal.

Console-Deals.com is the UK’s largest dedicated video gaming price comparison website, giving them unique insights and data around consumer buying habits. By tracking their own sales and traffic data across the three main consoles available at the moment - the Xbox One, the PS4 and the Nintendo Switch - we are able to show a striking upsurge in console demand and sales, despite several adverse factors which will be discussed below.

All three current core consoles - Microsoft’s Xbox One, Sony’s PS4 and Nintendo’s Switch - have seen a major surge in year-on-year UK sales based on our data, for the period between March and the end of May, during which the UK entered lockdown due to COVID-19. The Switch has seen a doubling of sales, while the PS4 has tripled its numbers and the Xbox One has quadrupled. 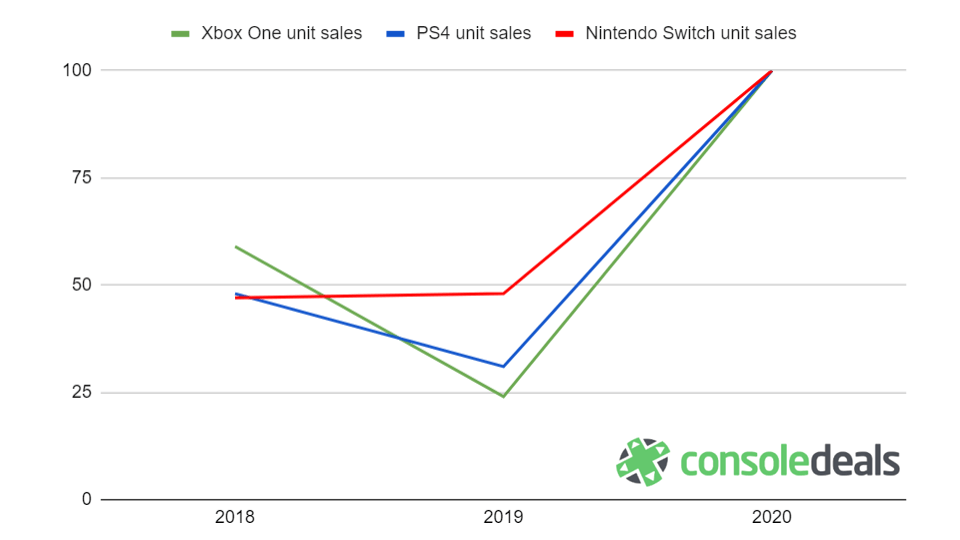 Data normalised to reflect the relative changes in buying trends for the three consoles; data does not account for total unit sales.

These numbers are even more impressive when considering the conditions under which they have been achieved. Games consoles as a market are regularly subject to sales and discount, during which times sales naturally spike. However, sales have been virtually non-existent since the beginning of May, with consoles largely sticking to their RRPs, if not more. In the case of the main model of Nintendo Switch, stock has almost been completely restricted to a small number of retailers, who have only made the consoles available in bundles that raise the price from the £279.99 RRP to closer to £400.

Secondly, the Xbox One and PS4 are to be effectively replaced by the Xbox Series X and the PS5 later this year. Console sales are highly cyclical, and with both the PS4 and Xbox One entering their final months of being the flagship consoles for Sony and Microsoft, we had expected to see some heavy discounting on both in order to sell through the remaining stock. Instead, with prices largely static, they have sold a huge amount; Xbox One in particular not only sold four times as many units as the equivalent period in 2019, but double what it sold in 2018 for the same two month period. With the lockdown having resulted in far higher demand for the PS4 and Xbox One, we may not see the traditional end-of-life discounting we've become accustomed to.

The Switch is the newest of the three consoles, having been launched in 2017. However, the major impediment to Switch sales has been stock; while the Lite model has had solid availability, the main model of console has been almost completely sold out, with the few retailers who have had stock increasing the prices or only selling it as part of an expensive bundle. As we shall see when we look into the traffic trends, had it not been for these stock shortages, the Switch would have far exceeded the sales in the same period in 2019 and 2018, which it doubled.

Console-Deals.com has ranked fairly consistently within the first page of Google from several core transactional terms related to each of the three consoles for the past three years. In order to allow for slight fluctuations in rankings and gradual changes in the layout of the Google search engine result page, we’re comparing the total number of impressions we received - this means that the user didn’t need to have clicked on Gaming Deals, they just needed to Google it and have Gaming Deals presented as an option. 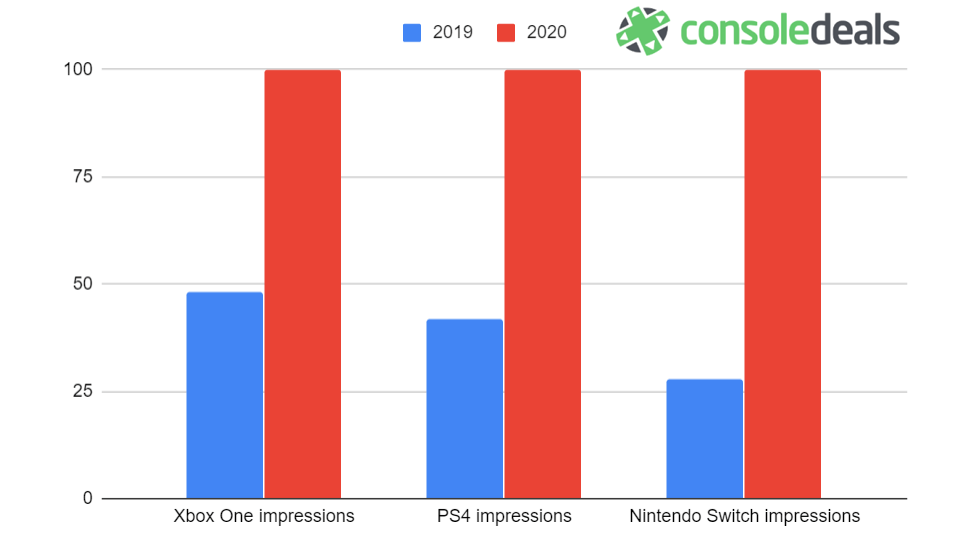 Data normalised to show the relative growth in impressions from 2019 to 2020.

As this graph shows, keywords related to Xbox One more than doubled, while PS4 terms increased even more and Nintendo Switch related searches tripled when compared to the March - end of May period in 2019 versus 2020.

We can also look at Google Trends’ data for the three consoles, and see the spikes that has resulted this year from COVID-19 and an increase in demand for indoor entertainment.


As these three graphs demonstrate, all three consoles have experienced unprecedented interest which is only matched by the peak periods around Black Friday and the build up to Christmas. This trend mirrors what we’ve seen internally.

While the demand for consoles has abated somewhat as lockdown has continued, it is still far higher than is normal. We expect that a re-stock of the Nintendo Switch could see sales soar again. What knock-on effect this could have on sales of the PS5 and Xbox Series X, however, remains to be seen.