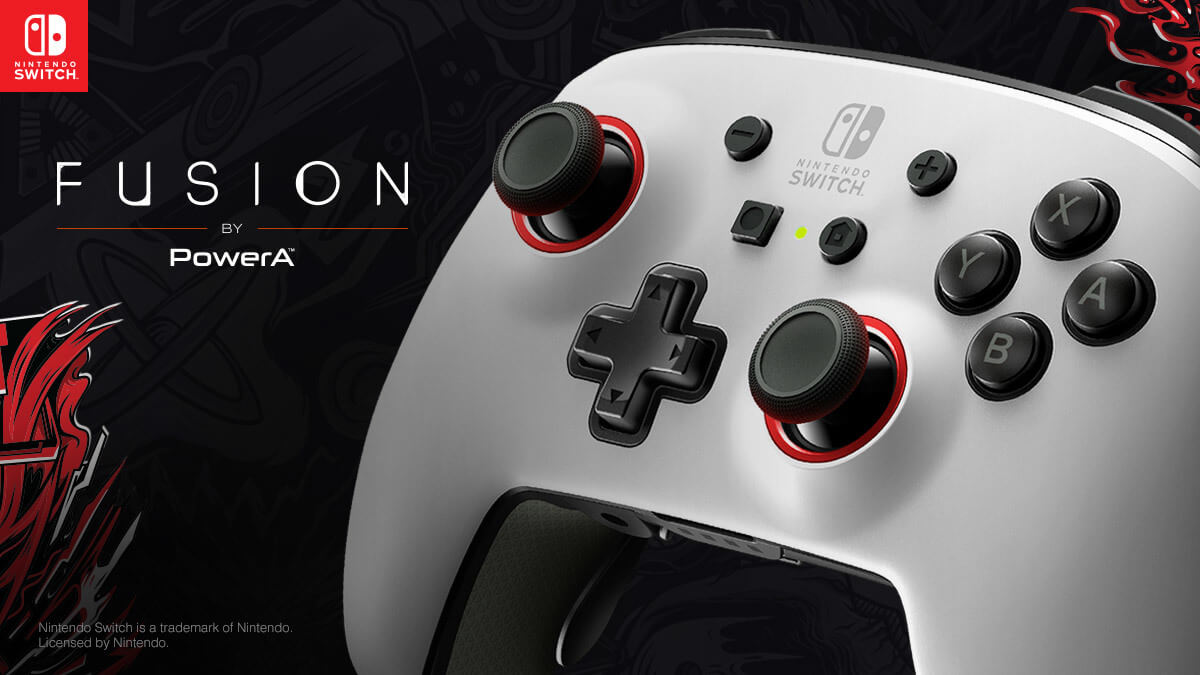 It’s clear that PowerA is intent on dominating the market for third-party Nintendo Switch controllers. In between the Nano (designed for commutes/travel), the Enhanced (available in various colours) controller lines and now this, the renowned accessories manufacturer clearly wants to be every Switch owner’s go-to choice for gamepads. So far, it’s done a pretty good job appealing to the casual player base, but one area they’ve been holding off on is the “professional” crowd. That’s where PowerA’s FUSION accessory line comes in.

Iterations of the FUSION already exist for Xbox One and PlayStation 4, but now it’s time for Nintendo’s hybrid console to shine. The FUSION Pro Wireless Nintendo Switch controller mostly lives up to the promise of giving players a greater level of comfort and control. Question is: Is there much demand for it? After all, rarely will you find the Nintendo Switch to be a serious PVP gamer’s preferred console. That doesn’t take away, however, from what is still an exceptionally designed and pleasant-to-use third-party solution, one which even manages to rival the official Nintendo Switch Pro controller – albeit while throwing in a few extra features. Let’s break down why…

Most Nintendo Switch gamepads tend to look very similar, and with good reason! Players simply agree that the official Pro controller option perfectly balances comfort, function and design, which is great for us but can be a challenge for an accessories manufacturer like PowerA. That’s why it shouldn’t come as too much of a shock to learn that the FUSION Pro for Nintendo Switch boasts a familiar style, matching the familiar shape and look of what most Switch owners are now accustomed to. The FUSION Pro takes the “if it ain’t broke, don’t fix it” approach.

One stylistic factor it does have over other options, however, is the element of choice. You see, rather than saddling you with just one colour tone, PowerA have been kind enough to provide two template options: White and Black. Both tout a matte-style soft-touch finish that prevents the glossy aesthetic seen elsewhere, resulting in an appearance that is pared-back yet elegant. It’s worth noting that the anti-friction rings featured on the white faceplate sport a tinge of orange, yet it doesn’t detract from the overall design. Put simply, the FUSION Pro Wireless Nintendo Switch controller plays it safe from a style perspective. 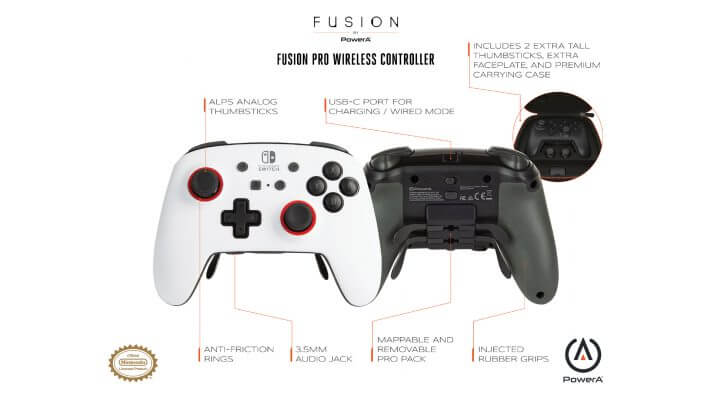 Here’s where things get interesting with the FUSION Pro Wireless Nintendo Switch controller. Function-wise it has all the bells and whistles you’d expect, only it packs in a four-button pack on the back which can have any of the face or trigger buttons’ function mapped to it. This will of course give you a competitive edge in games like Fortnite, Apex Legends and Paladins, or could serve as a more comfortable option for players who struggle to reach the L and R buttons. Plus, as expected, anyone worried about accidently hitting any of the four pro buttons can swap it out for a standard pack.

Having four remappable buttons is notable because most ‘pro’ third-party controllers typically only feature two, so this gives PowerA’s rendition a slight edge over its competitors. Also notable are the appreciated if somewhat expected swappable analogue sticks, which is easily done by simply lifting off the faceplate and clicking in your choice of either convexed or concaved analogue stick. Sadly, while they range in height (to help you adjust aim sensitivity), there’s no racing thumbstick included, which would have been ideal for games like Mario Kart 8: Deluxe.

Another core feature the FUSION Pro Wireless Nintendo Switch controller lacks compared to its PS4 counterpart is the three-wait hair trigger locks. This plays such a crucial aspect for competitive players who are always seeking ways to decrease their time to kill, so it’s disappointing to see that PowerA haven’t included them here. All four triggers that are here do offer great feedback, absolutely, yet it seems like a missed opportunity. Worth noting it also isn’t compatible with PC.

The FUSION Pro Wireless Nintendo Switch controller delivers reliable performance both in wired and Bluetooth mode. Provided comes a USB to USB-C braided connector cable, which is a nice size and charges the controller for 30 hours of total playtime thanks to the built-in 900 mAh battery. I didn’t notice any latency when using it in either mode, and my in-game actions like gunshots, quick-time button prompts, and racing turns always felt responsive.

One important function of the Nintendo Switch compares to other console is its lenience on gyroscopic control. And while you’d think this might be lost in a third-party controller, PowerA have done well to build this into the FUSION Pro – to the point that it works just as flawlessly as Nintendo’s own Pro controller. This makes lining up shots in games like Breath of the Wild, Splatoon 2 and Fortnite an absolute breeze. Especially if you tie the shoot function to one of the remappable back buttons, the FUSION Pro has the potential to offer the ultimate in firing convenience on Switch.

I’ll admit that the FUSION Pro Wireless Nintendo Switch controller has a lot more heft to it than most gamepad options, but I ended up liking this a lot because of the resulting premium-quality feel. Also adding to this inherent comfort are the injected rubber grips, which are a definite leg up on the official Nintendo Switch pro controller as it ensures sweaty-handed players will never lose control. It comes in handy whenever you’re playing competitively and the pressure is on. 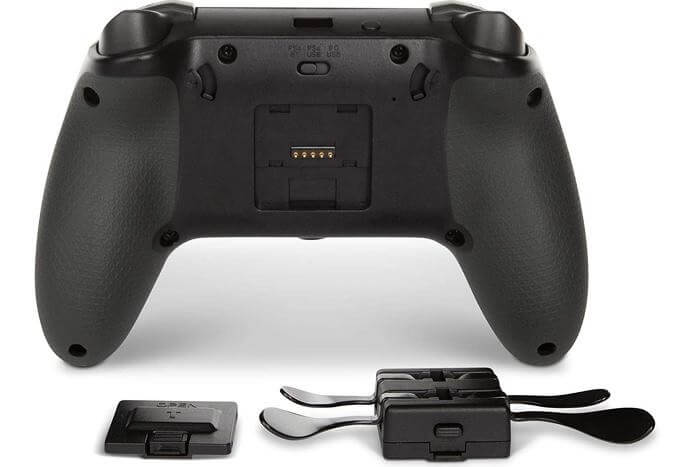 Overall, this is a third-party controller that simply feels extremely comfortable to hold in the hands over an extended period of time. I used it across a range of different games over multiple hours, and never once did I cramp up or feel uncomfortable. Both the black and white faceplates also feel nice whenever your fingers brush between buttons, largely due to the soft-touch finish. Most impressive, though, is the inclusion of anti-friction rings around the analogue sticks, which have become a staple of PowerA’s FUSION line, so it’s good to see it make the transition here. Aiming always feels smooth.

It may surprise some players to learn that this Nintendo Switch version of the FUSION Pro is actually priced a little lower than its Xbox and PS4 cousins, but this is somewhat expected considering the lack of three-way triggers and its incompatibility with PC. The gamepad’s typical RRP here in the UK stands at £99.99, which feels about right when you consider the addition of four remappable buttons, ability to switch faceplate colours at any time and extra comfort factors.

Of course, the FUSION Pro’s price point makes it roughly £30 more expensive than the official Nintendo Switch Pro controller. It’s up for you to decide whether or not this slight hike is worth it, but at least you can rest easy knowing that you’ll lose almost nothing in terms of features if you do indeed decide to make the switch. Compared to PowerA’s other FUSION controllers (on other platforms) it is most definitely lacking, but it’s still got a few bonuses not seen in the first-party option that will enhance your competitive play.