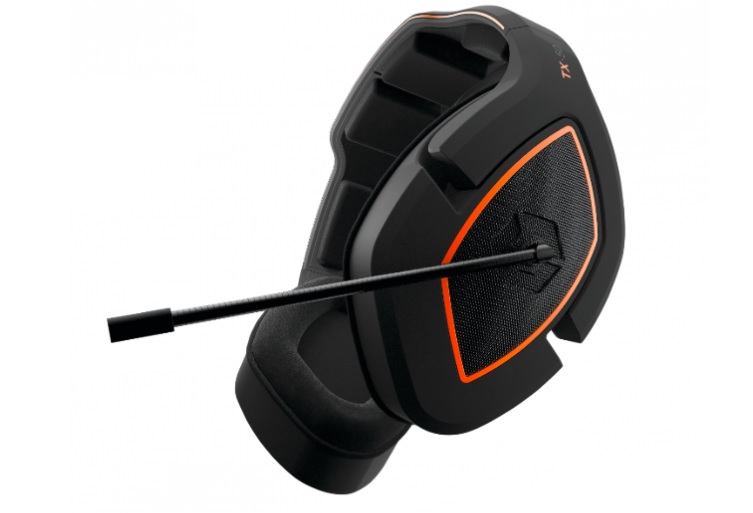 A new console generation demands a new gaming headset capable of fully immersing you into your favourite games through audio. And while the PS5’s official Pulse 3D headset has been specifically designed to take advantage of Sony’s latest box, the £90 price tag is perhaps a big turn-off for those who find themselves gaming on a budget - especially when you’ve just forked out £400+ for a next-gen console. Fear not, however, because that’s where Gioteck’s TX-50 headset comes in, being a new tactile headset solution that aims to appeal to general players that have recently picked up a PlayStation 5 or Xbox Series X.

The UK-based accessories manufacturer isn’t hiding the fact that it wants the TX-50 to represent great value for money to players, but does it live up to this bold claim? Kind of. The Gioteck TX-50 might not be the most technically impressive headset around, I’ll admit, yet its 50mm high impact drivers and great build quality makes it a viable choice against other entry-level gaming audio solutions. Here’s what the TX-50 gets you…

The TX-50’s look and overall aesthetic is one of the best things about it. We were sent the sleek Blue/White colourway for our review, but those with an Xbox Series X can rest easy knowing that both Black/Green and Black/Orange options also exist. I’m always a little worried with headsets that the manufacturer’s logo will always look too garish no matter where they place it, but luckily the TX-50’s cool style isn’t hindered. This is because the Gioteck imprint neatly hidden against a deep blue finish on the top of the band. You’ll barely even notice it. 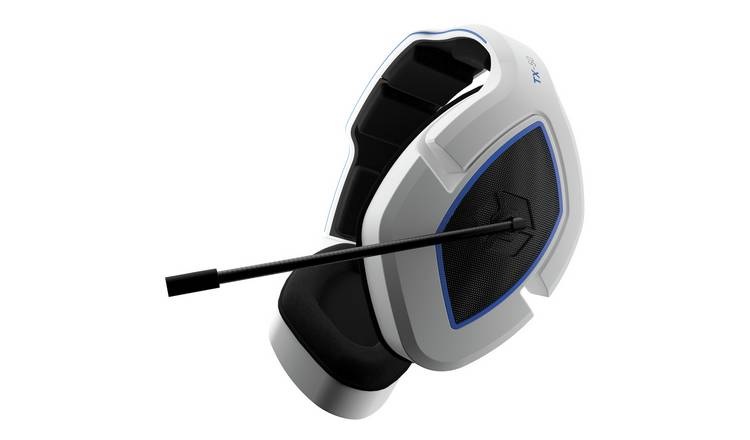 The earcups themselves even look pretty slick. They’re coated in the same white finish as the braided cable wire and headband, sure, but they work well against the crosshatched mesh design used to successfully house the 50mm drivers. As far as colours go black is also a mainstay thanks to the inner alacantra cushioning. And while having three distinct tones combine in one product might seem a bit like overkill, the TX-50 makes it work. Unfortunately, those who like their consoles and accessories to match will be disappointed. Because although the TX-50 touts a cool white tone it’s not the same shade as the PS5’s white wings. Still, for me this was never a turn off.

The best sign of a gaming headset’s comfort is if you can go for long play sessions without realising it’s still on your head, right? The TX-50 pretty much manages to pull off this feat, despite the earcups not cupping my ears as naturally I’d like. However, this is a factor that will no doubt vary from player to player, so it says a lot that wearing the TX-50 never felt irksome. Ensuring an ample level of comfort is the so-called ‘alacantra’ cushioning that Gioteck has embedded, which feels almost like a soft velvet when touched. Pulling down the bendable metal mic, though stiff at first, is also natural .

The Gioteck TX-50 is also relatively lightweight when compared to a lot of gaming headsets out there. You might expect this from a headset that’s positioned so affordably, but even still this is one of the company’s most premium options, so it’s an impressive feat considering it holsters 50mm high impact drivers. The last thing to mention in terms of comfort is that the wired cable is not too short and not too long, perfect for plugging into the bottom of your Xbox Series X or Dualsense controller without hindering your movement. The TX-50 might be one size fits all, but the adjustable headband provides just enough wiggle room to sit comfortably on most people’s heads (I’d imagine).

The most important factor of any decent gaming headset is arguably the sound quality, and unfortunately, it’s here where the TX-50 falters a bit. During my gaming sessions and general day-to-day duties I use a 50mm driver-equipped headset from another brand, and it didn’t take long for me to realise how much of a decrease in immersion the Gioteck’s effort provides. Granted, the headset I’m referring to is priced roughly £40 higher than the TX-50, yet this is most definitely an area where the phrase “you get what you pay for” is truly proven. 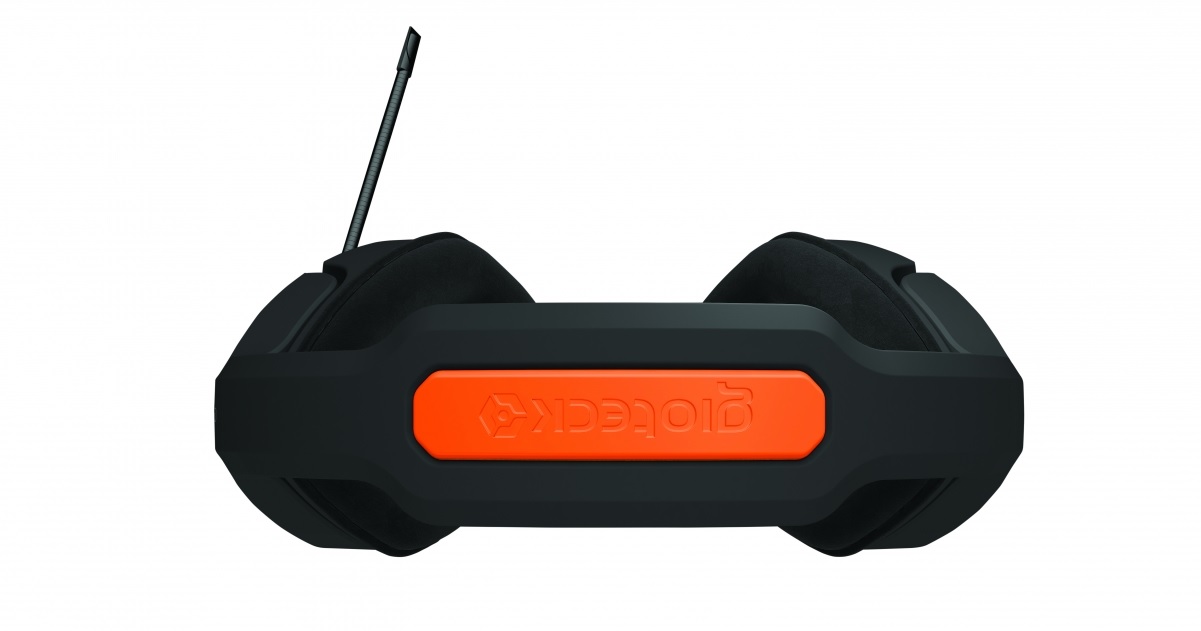 That’s not to say that the TX-50’s performance is god awful, just that in-game sounds such as explosions, gun shots and screams will be a little more muffled than if you went with a more premium headset option. It’s a strange one, considering that the TX-50’s drivers should in theory allow it to pack an audible punch. However, if you’re used to having crystal clear surround sound in a headset this will be quite the come down. The TX-50 does do deep bass quite well, yet almost always did I feel like up-close audio sounded farther away than it should have.

The maximum volume level isn’t even that generous. Compared to other headsets on the market the TX-50 can be rather muted at times, even when you switch on the inline slider for sound and wind up the volume all the way. On the more positive side, though, the headset’s wired braided cable ensures that there are never any audio hiccups or hitches in what sound quality that is there. The TX-50 might be equipped with high impact 50mm sound drivers, but without substantial setting tweaks it doesn’t necessarily take advantage of them.

From one extreme to the other, you can’t really complain about the Gioteck TX-50’s price tag. Coming in with a standard RRP of £29.99 at most UK retailers, this is one of the best value propositions for players seeking a gaming headset with great build quality and built-in high impact 50mm drivers. Again, though, just bear in mind that these particular drivers aren’t as impressive as some other rival gaming headsets out there packing a similar heat. The TX-50 manages to cut so much cost due to it’s wired nature, but having a 3.5mm jack input on all first-party controllers helps to offset any potential awkwardness. Overall, the TX-50 is a good deal.

The Gioteck TX-50 might not be able to rival the sound quality of some other rival headsets, but it's exceptional style and comfort helps give it a premium feel despite its budget price. If you have a new PS5 or Xbox Series X and want an acceptable audio solution, this will do the job.

Get the best current price on the Gioteck TX-50 gaming headset: 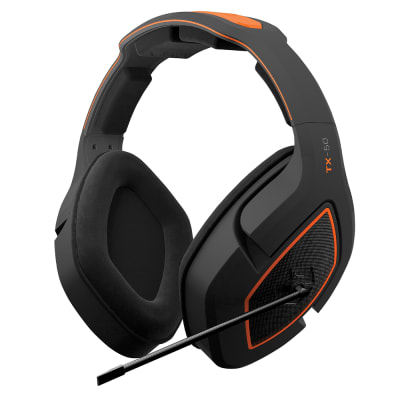