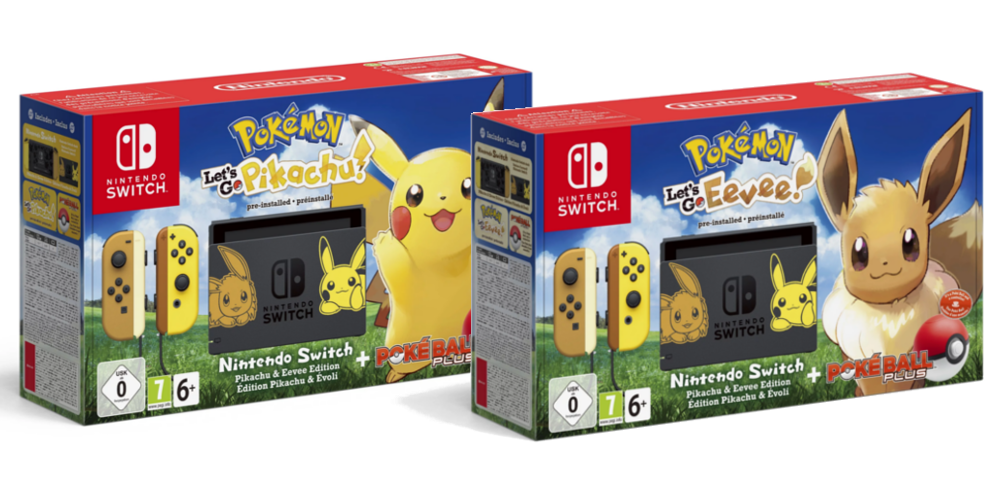 In some of the least surprising bundle news of the year so far, Nintendo have announced that we'll be getting two new Switch bundles to commemorate the launch of Pokémon: Let's Go, Pikachu! and Pokémon: Let's Go, Eevee! Pokémon is, of course, one of Nintendo's big-hitting franchises, capable of generating demand like few other gaming series out there. There'll be plenty of people out there who have held off on buying the still-relatively-expensive Switch until the series made its debut. It's only natural that Nintendo would seek to make the most of that with a couple of bundles.

The two bundles, other than the game (which comes pre-installed on the console) and the box art, are identical. For Switch enthusiasts who are determined to catch 'em all (sorry) when it comes to Joy-Con colors, there are two new ones on show with the Pokémon bundles. The left is a light brown, Eevee's main colour, and the right is a more muted yellow than the neon yellow that was released last year. The Joy-Con straps come in contrasting colours - the left is a beige, the right is a dark brown.

Finally, the two bundles both come with the Poké Ball Plus controller, which is launching in conjunction with the game.

Pokémon: Let's Go, Pikachu! and Pokémon: Let's Go, Eevee! make the second appearance of Pokémon on the Switch, after last year's Pokken Tournament DX. While some fans of the core RPG series have expressed disappointment that LGP and LGE are not new entries (an entirely new game launches next year), the two games are almost certain to be a major hit with casual players. Remakes of the beloved original Blue, Red and Yellow games, they won't need to do much to convince those who have been brought back into the Nintendo fold by the Switch.

The bundles will launch November 16th, the same day as the game. No word on pricing yet, but with the Switch, game and Poké Ball Plus controller all included, expect an RRP around £350.