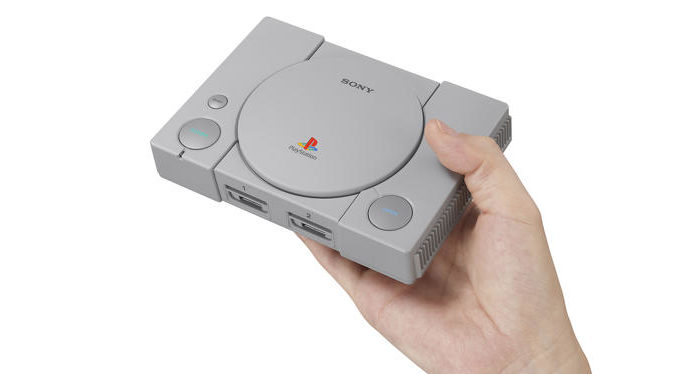 Update: Pre-orders are now live, you can compare prices here.

Speculation has been rampant this year that Sony would be unveiling new hardware at some point this year. The PS4 is now nearly five years old, and PlayStation fans have been hoping for news on a successor.

Well, today they did announce a new console - although it's not what we expected at all. The PlayStation Classic will launch on December 3rd, and will be ticking the nostalgia boxes for many gamers this Christmas.

Following in the footsteps of Nintendo, who launched the NES Classic in 2016 and SNES Classic last year, the PlayStation Classic is a miniature replica of the original PlayStation console (not the PS One remodel) that comes pre-loaded with 20 games. The console comes with an HDMI-input, so it will connect with modern TVs, and comes with two controllers as the SNES Mini did, so expect some nostalgia-filled local multiplayer. Though the console does feature a disc tray-style design and a tray open button, this is purely cosmetic; no discs are involved. The tray open button serves to let you change games.

One thing to bear in mind is that the console doesn't include an AC adaptor, presumably so Sony can manufacture the same console and sell it worldwide without worrying about different plug types. You'll need to buy one separately.

What people will be most excited for is the opportunity to dust off some old classics. Of the 20 games, Sony have announced five of them so far:

What other games could we see? One of (or both) the first two Gran Turismo titles would be a safe bet, as two of the best-selling games on the console and originally published by Sony. PaRappa the Rapper (originally published by Sony) and WipEout (Sony appear to own the rights) both seem highly possible. Crash Bandicoot could make an appearance in some form, although the first three games in that series were remastered and re-released last year as the N. Sane Trilogy. Metal Gear Solid would be a popular choice, although the game's licensing could be somewhat complicated. Tony Hawk's Pro Skater (and Pro Skater 2), Resident Evil 1 & 2, Driver (and Driver 2) and others are in a similar boat where their inclusion would hinge on a tangled web of old licensing agreements.