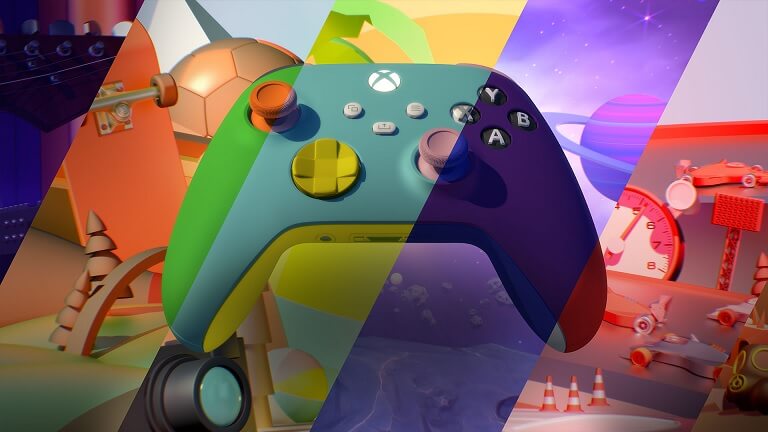 One of the best features from the Xbox One generation of consoles was Microsoft’s ability to enable players to create their very own controller through a service known as Xbox Design Lab. The lab’s first incarnation was officially retired in advance of the Xbox Series S|X’s arrival last October, but now it’s back and better than ever. This new version of Xbox Design Lab was launched in the wake of Microsoft and Bethesda’s E3 showing earlier this year, and offers Xbox players the chance to create their own customised gamepad with 18 initial colour options.

In this post we’re going to cover how the Xbox Design Lab works, the different customisation options it offers you, and what features Microsoft may choose to add in the near future. Of course, Xbox will continue to release new controller variants like the DayStrike Camo, Electric Volt and Shock Blue colours, but if there’s a specific way you want your Xbox controller to look, the Xbox Design Lab may be your ideal solution.

What controller colours are available in the Xbox Design Lab?

You’d have a hard time creating your perfect controller with a large suite of attractive colours to make use of. Thankfully, Xbox Design Lab has you covered in this area. Since its recent launch on June 17th 2021, Microsoft has made 18 different colours available in the Xbox Design Lab. These range from the simplicity of Carbon Black all the way up to a vibrant Zest Orange tone. Xbox veterans will likely recognise most of these from the previous, Xbox One incarnation of the Xbox Design Lab, and will be able to slip right back into the swing of things.

Here is a full list of all 18 colours available to use in the Xbox Design Lab:

Which components of the Xbox controller can be customised?

Here’s where things get really interesting. Being able to customise and swap out almost every major component of your controller is one of the biggest perks of the Xbox Design Lab offers, and it’s all handled elegantly here. Changing the colour of your gamepad is as simple as selecting the desired element from the right-side dropdown menu, opening up the tab and selecting any colour of your choice. You’ll then be able to see what your ideal gamepad will look like in real-time.

To talk specifics, the components you can customise are as follows:

The only major visual component you can’t adjust in the Xbox design lab is the colour of the central Xbox logo. It’s instead considered part of the controller’s ‘body’, which shouldn’t be too much of an issue since it’ll be lit up in pure white (as per usual) when in use anyway. The last thing to mention is the Lab’s engrave feature. Much like before, you can personalise your Xbox controller to the nth degree by having a caption of your choosing etched just underneath the D-pad and right analogue stick. It’s worth bearing in mind that the word can only be engraved in grey.

How much does a custom Xbox Design Lab controller cost?

The typical going rate for a standard Xbox controller is £59.99 here in the UK, but you can regularly find the standard Carbon Black or Robot White variants for generally £10 less. Even still, it should be heartening to know that there isn’t too much of a premium to play when picking up a personalised controller from the Xbox Design Lab, as the final price here is also £59.99 – that’s with delivery included.

If you’re hoping to purchase a custom Xbox controller with an engraving, however, that does come at a premium. £7.99 is the fee you’ll be charged for the privilege of naming your colourful creation. That’s not so much to put you off from grabbing a custom controller entirely, but it is something worth bearing in mind. As is the fact that Microsoft has implemented a ban list onto the Xbox Design Lab’s engrave feature, where phrases like “damn” and others aren’t applicable.

Microsoft has already gone on the record to say that more customisable options will be made available “over the coming months”. This is great considering that the current Xbox Design Lab doesn’t offer as many tweakable features as the previous one. As for what these extras might be, who’s to say? However, it’d be wise to assume that military camo colours/skins will be one of the first new elements to be added, as Microsoft itself recently released the red Daystrike Camo Xbox controller as a standalone product.

Then there’s the absence of fade colours. Whereas before you had the choice of two different shades for the main body of your Xbox controller, no such feature currently exists. Following that, other patterns that sit under the main colour would be a welcome addition, as would even more colour tones – including those that are more metallic like Silver and Gold. Microsoft has proved that possibilities with the Xbox Design Lab are almost endless. Players that crave such a high level of customisation, however, will need to be patient.