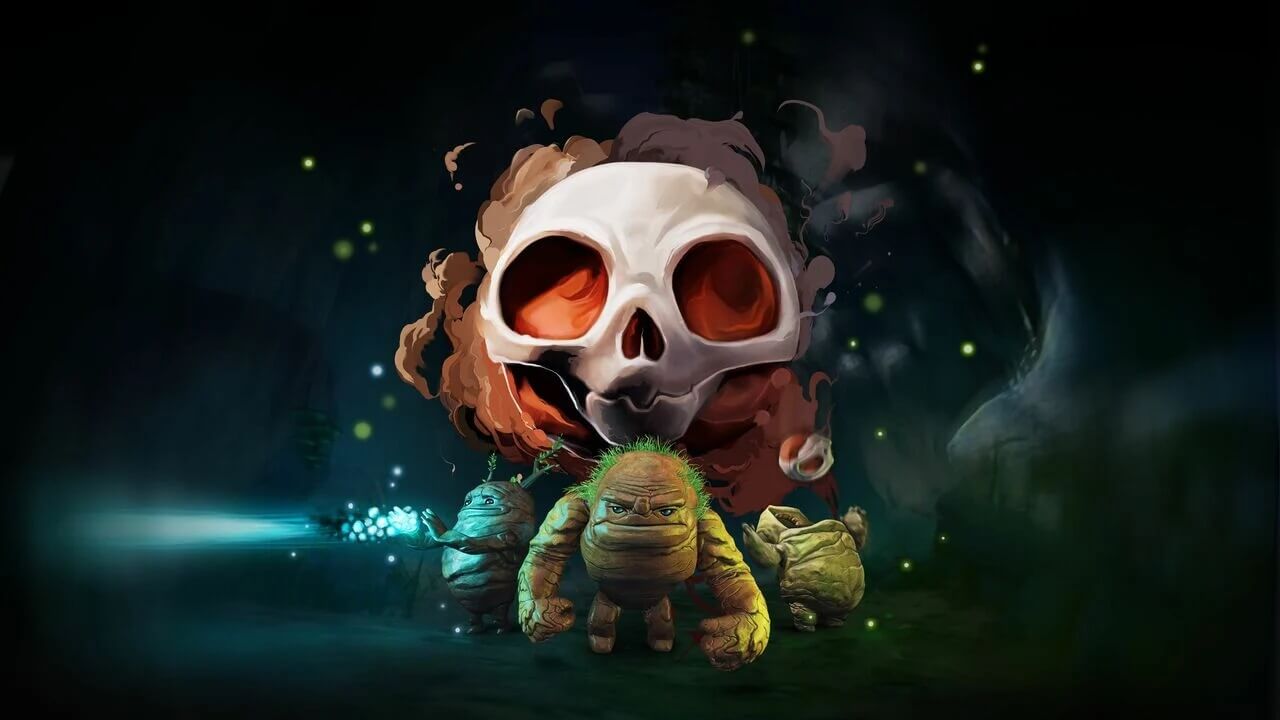 If you’ve ever played the Metroid Prime Trilogy and thought to yourself, “Hmmmm, I wish there was an entire game made up of Samus’ morph ball segments” then Skully is your best chance yet of scratching this oddly specific itch. That’s because, for the most part, it sees you take on the role of a disembodied skull, which might be an inconvenience in general but happens to be ideal for traversing a tropical island laden with various environmental obstacles. This overall adventure may only be brief, yet this is old-school 3D platforming done well, spruced up with a charming twist that never ceases to feel empowering.

One of the best aspects Skully has going for it is just how great it feels to control. For as obvious as it might sound, a game like this can live or die on how it handles its sense of speed and momentum. Developer Finish Line Games clearly recognised this, paying great attention to making the simple act of movement never a chore. This is important considering that most of your time in Skully will be spent hopping, skipping and rolling across all kinds of platforming challenges. The game recommends you play with a controller (I played on PC), and I’m so glad I did because using the left thumbstick to glide across bridges and ridges always felt buttery smooth.

In addition to keeping as far away from fire, water and more in order to stay alive, Skully offers up a good degree of challenge in each chapter. Things start of rather simply at first, as you’d expect, with you doing your best not to, say, fall into pools while gliding. Eventually, however, you’ll need to watch for more complex environmental hazards like whipping tentacles, pesky wind gusts and even acid raid. Offsetting any unwanted difficulty spikes is the fact that a lot of these function extremely similarly to begin with, that is until you’re given additional ways to fight back.

If you thought you’d be spending all your time in Skully as the eponymous rolling head, think again, as shaking things up are the instances where you can take on a golem form. These are when the game dips into more traditional 3D platforming territory, with you inhibiting one of three distinct golem types useful for solving environmental puzzles. The first you’re gifted early on is the strong form, and comes in handy for taking down enemies, breaking through walls and knocking down bridges that open up new areas needed to progress. All three boast their own unique abilities such as this, forcing you to adapt and think cleverly depending on the environment you find yourself in.

Pacing isn’t something you typically think about when playing a 3D platformer, but by including these two distinct playstyles it’s something Skully actively needs to think about. Thankfully, there’s a nice balance between the times your rolling through environments as a skull in contrast to the brief golem segments – the result is a great amount of variety present in all 18 chapters. Better yet, while it’d be quite easy to blaze through most of them quickly, the need to gather almost every flower collectible in each stage always ensured I didn’t do this. 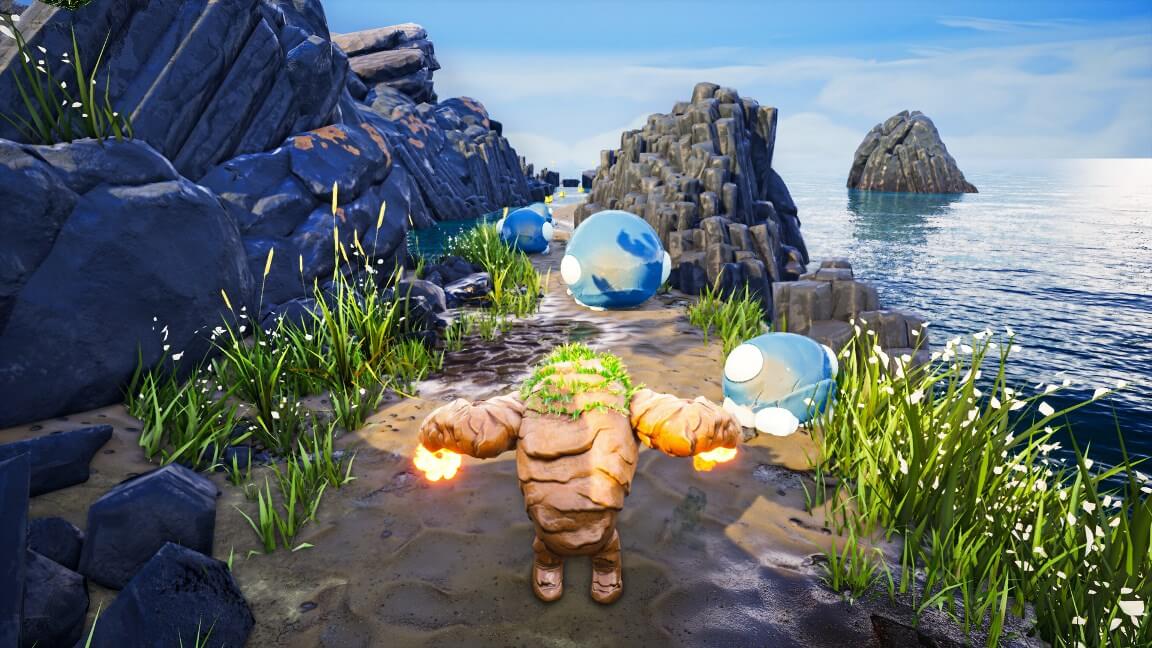 There is a basic story to offer up context to your actions, centring on a family feud between a group of demigod siblings responsible for a different element on the island. If that sounds bonkers, that’s probably because it is, yet top notch voice acting helps sell you on it. Terry is the character you spend most of your time with, acting as an unofficial narrator – as well as your creator – to prevent any long stretches of silence. Your ultimate goal as Skully is to bring all four siblings together by visiting each’s different domain, and while simple is a premise that’s well executed.

Skully might largely be an indie title, but there were several times I found myself stunned by how beautiful it could look. It helps that the opening portion of the game begins on the coast of the island, letting you reveal in some especially pretty water physics and nigh-on perfect lighting. Unfortunately, the game does show its budgetary constraints in aspects like its inconsistent checkpoints, unreliable camera and its animatic cutscenes. All of which never outright ruin the overall experience but constantly remind you this isn’t as polished as it potentially could have been.

There’s also the issue of bosses, and I’m even reluctant to even call them that. It doesn’t take a genius to realise that when elemental siblings are introduced, you’ll come face to face with them eventually. Sadly, though, there’s only ever one authored solution to taking each one of them down and they’re not all that challenging. Often you just have to use a skill you’ve learned in the preceding levels repeatedly in order to win, a la The Legend of Zelda – and they’re almost always over too quickly. 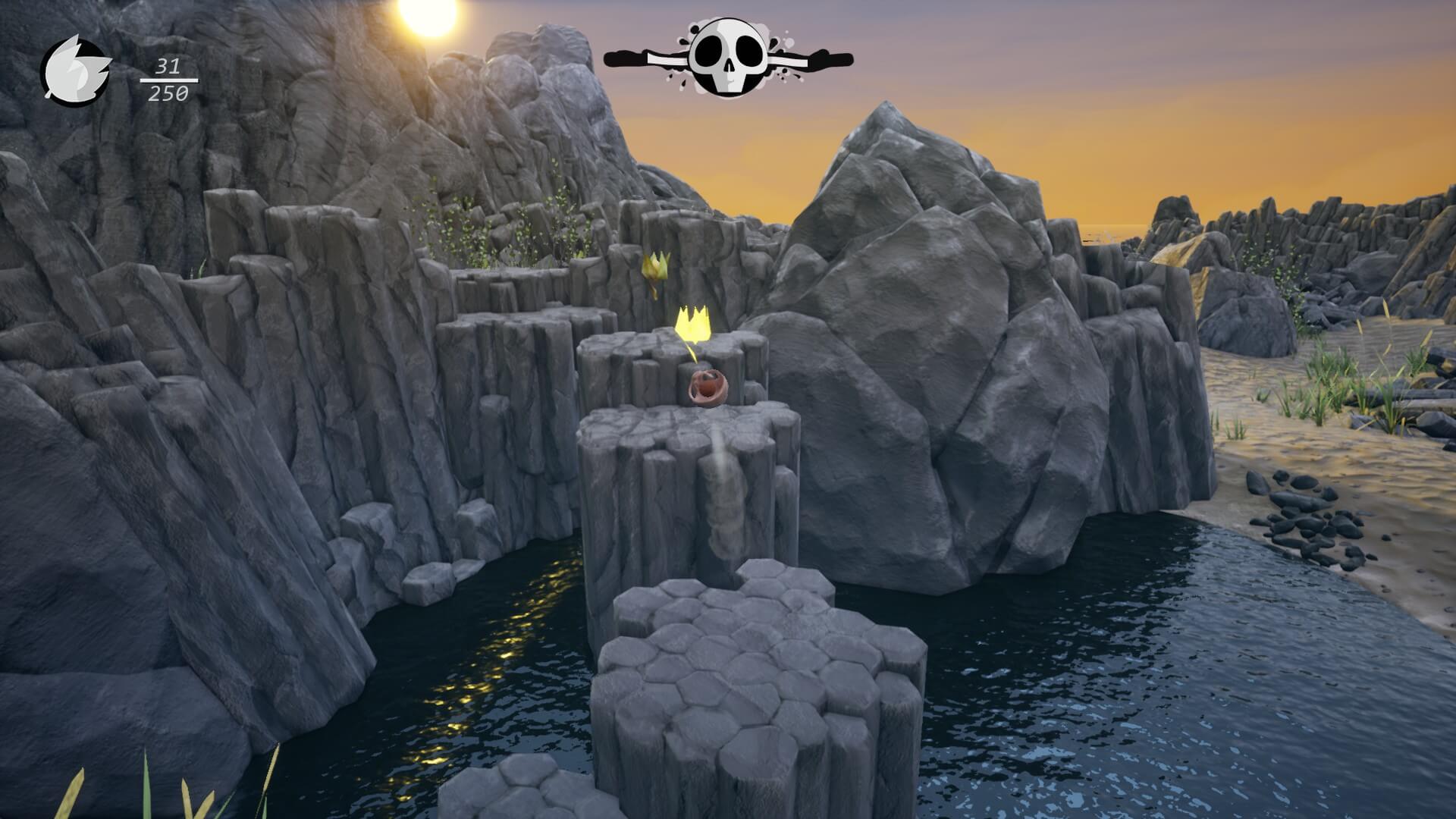 Skully is by no means the perfect platformer, but it should be commended for the amount of charm it packs into what is ultimately a rather bite-sized experience. Environments and locations always look beautiful, there’s a great sense of momentum whenever you’re on a roll (literally), and golem sections shake up the pace just enough to ensure that your goal to get from A to B is never just as simple as that. It is over all too quickly, yet it’s so inventive and creative while it lasts.

The best price for Skully