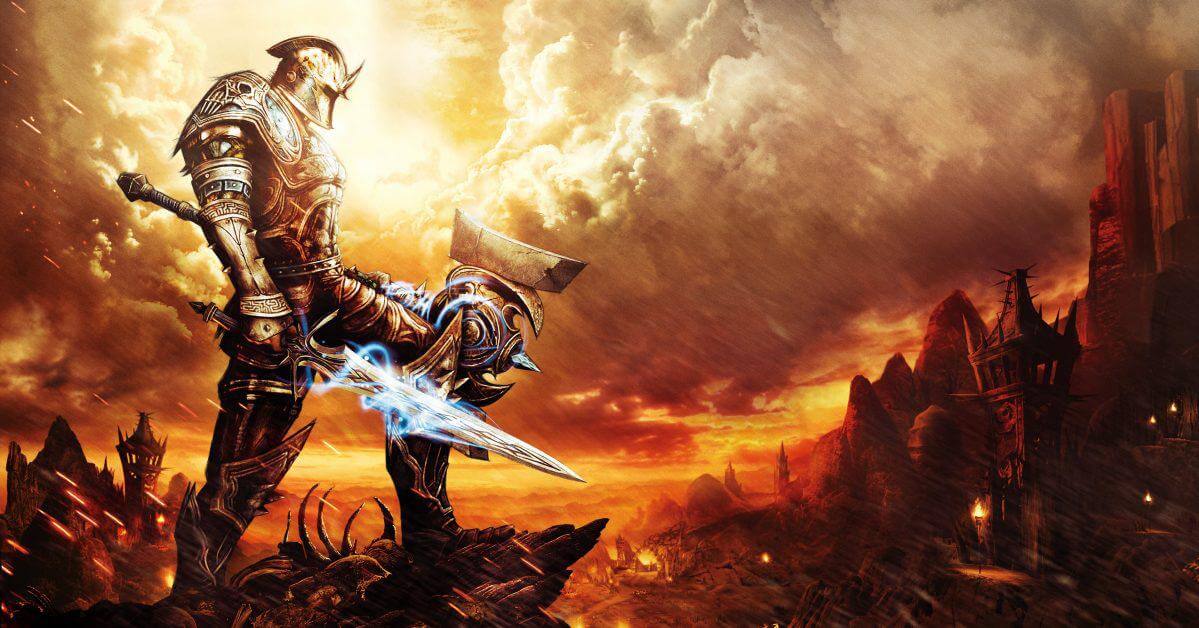 Ever since The Witcher 3: Wild Hunt released back in 2015, it seems like games have been a little gun-shy to tackle the high fantasy genre. Sprawling open-world RPGs of this style, in which you get to traverse and potentially save the land from evil forces, simply aren’t popular as they once were – but now we have THQ Nordic entering the fray to try and help change that. They’re doing this not with a new IP, no. 2012’s Kingdoms of Amalur has instead been revived to reckon all over again via a late-gen remaster. And while it might be a bit creaky by today’s standards, its customisable combat and sweeping story makes it well worth the return trip.

The first thing you’ll notice about Kingdoms of Amalur: Re-Reckoning is that it very much falls into the camp of a traditional ‘remaster’ as opposed to the full-blown ground-up remake treatment something like Destroy All Humans! received earlier this year. It only released 8 years ago after all on the previous console generation, so the result is a game that looks extremely similar to when it first released, only with some of the technical edges now smoothed out. Personally, for me, this ends up being a good thing, as so much of what makes Amalur unique is its stocky character models and rainbow hue colour palette.

In all honesty, not a lot has been done to this PS4 and Xbox One version of 38 Studios’ cult classic RPG. Aside from improved graphical fidelity, native 4K support for those with the appropriate TVs and some small quality-of-life adjustments. In terms of the latter, old-school players might remember that all of Amalur’s distinct zones used to be locked by level. Here, in the Re-Reckoning edition, however, the cuffs to explore have been taken off. This means that you no longer need pay too much attention to if or whether you should be entering a said dungeon later instead of now. It’s a small thing, but it does work better to encourage exploration as now enemy difficulty is designed to scale. It’s the stark opposite of Assassin’s Creed Odyssey.

For those who didn’t play Kingdoms of Amalur the first time around, here are the cliff notes. You play as an entirely custom-created character, who one day awakens from the Well of Souls to fulfil their destiny as the Kingdom’s saviour. What follows is a surprisingly well-thought-out journey full of memorable characters that does just enough differently from the Tolkien school of fantasy to stay interesting over 30 or 40 hours. Sure, it leans a little too hard on the ‘chosen one’ trope, but what player doesn’t want to be the centre of the story? Especially in a world as gorgeous as this one.

The Faelands is where this sprawling adventure takes place, being one of the titular kingdoms of Amalur that’s separated into five specific regions you’ll eventually visit in the hopes of fulfilling your destiny. All these regions are jam-packed with side quests, collectible-driven tasks and faction missions that serve to help further flesh out Amalur’s distinct fantasy setting, to the extent that sticking to the main questline almost always proves impossible. A lot of your time is spent travelling between these various points of interest, and there’s always plenty of reasons to veer off the beaten path. 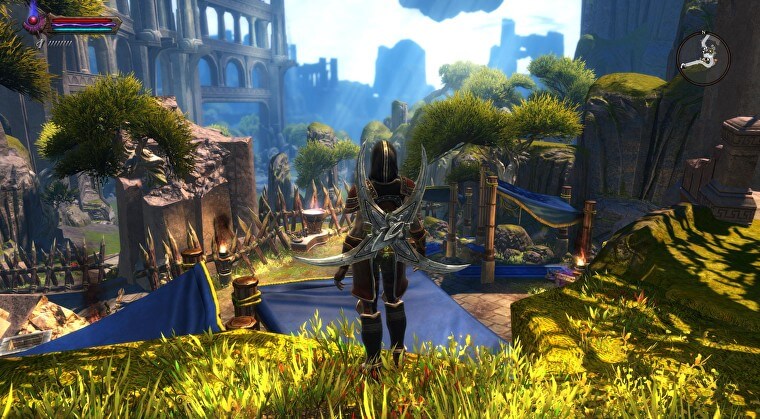 When not taking down a squad of mountain trolls at the behest of a recently widowed fisherman or wading your way through a dungeon in the hopes of discovering a hidden artefact, you’ll likely be forging your own weapon at a blacksmith or using sagecraft to create new equippable gems. Kingdoms of Amalur: Re-Reckoning is full of fun ways to customise your experience like these, still acting as one of the game’s main selling points compared to most other modern RPGs.

Another aspect that’s also aged very well is the combat. You begin the game selecting a one of four playable races: Almain, Dokkalafar, Ljosalfar and the Varani. I chose to play as the latter during this playthrough, which enabled me to focus explicitly on melee attacks whenever coming into conflict with foes. You’d think, though, that this would just mean repeatedly slashing my sword, but Amalur clever layers on even more customisation through secondary weapons (like bows), magical abilities and, of course, the eponymous reckoning mode.

This mode comes in particularly handy whenever too many enemies start to swarm you, activated by holding both shoulder buttons down at the same time which will see time temporarily slow down. It’s here, when taking down 6 or 7 enemies in mere moments, that Kingdoms of Amalur successfully grants you the fantasy of being the so-called “fateless one”, finishing up with a devastating cinematic manoeuvre that enables you to boost garnered XP. Systems like this might not outright make or break the game but adds a nice bit of stylistic character you likely wouldn’t see in a modern triple-A release. 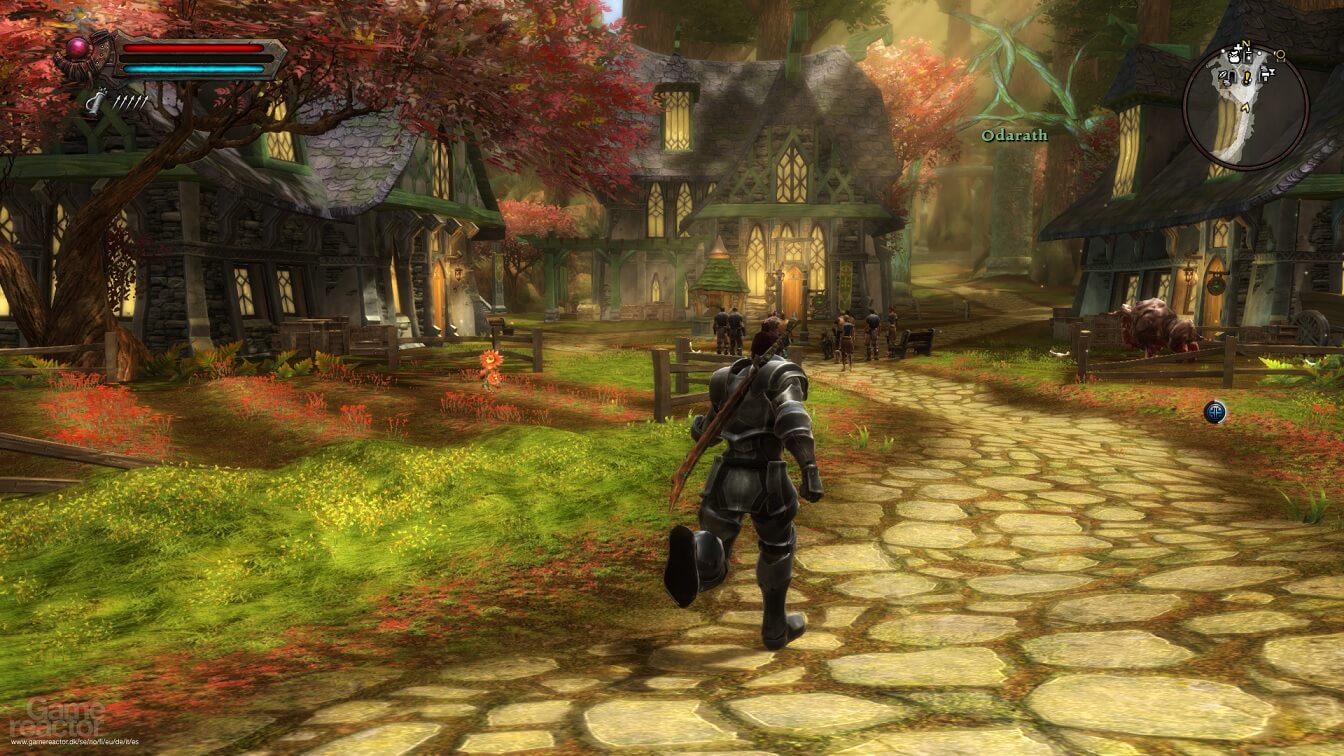 On the technical side of things, I was a little disappointed that a few wrinkles couldn’t be ironed out in time for this current-gen re-release. A case in point is the game’s camera, which continues to be a pain bashing into environmental assets or outright blocking the view during the midst of enemy fights. Then there are the load times that can often last upwards of 15 to 20 seconds. That might not sound like much, but in a game where fetch quests are frequent and you’re always going in and out of areas, the time you spend looking at a static screen soon adds up.

Despite this, there’s so much still to love about Kingdoms of Amalur: Re-Reckoning. Its nature as a mid-budget title – but one with some major creative talent behind it – largely saw it go overlooked in 2012 and garner a cult classic status. Now, however, during a time when open-world RPGs centred on true high fantasy are few and far between, here’s hoping the stage is set for this tale of destiny, might and magic to succeed the second time round. This remaster could have absolutely gone further on the technical side, but the core experience remains intact.

The best price for Kingdoms of Amalur Re-Reckoning