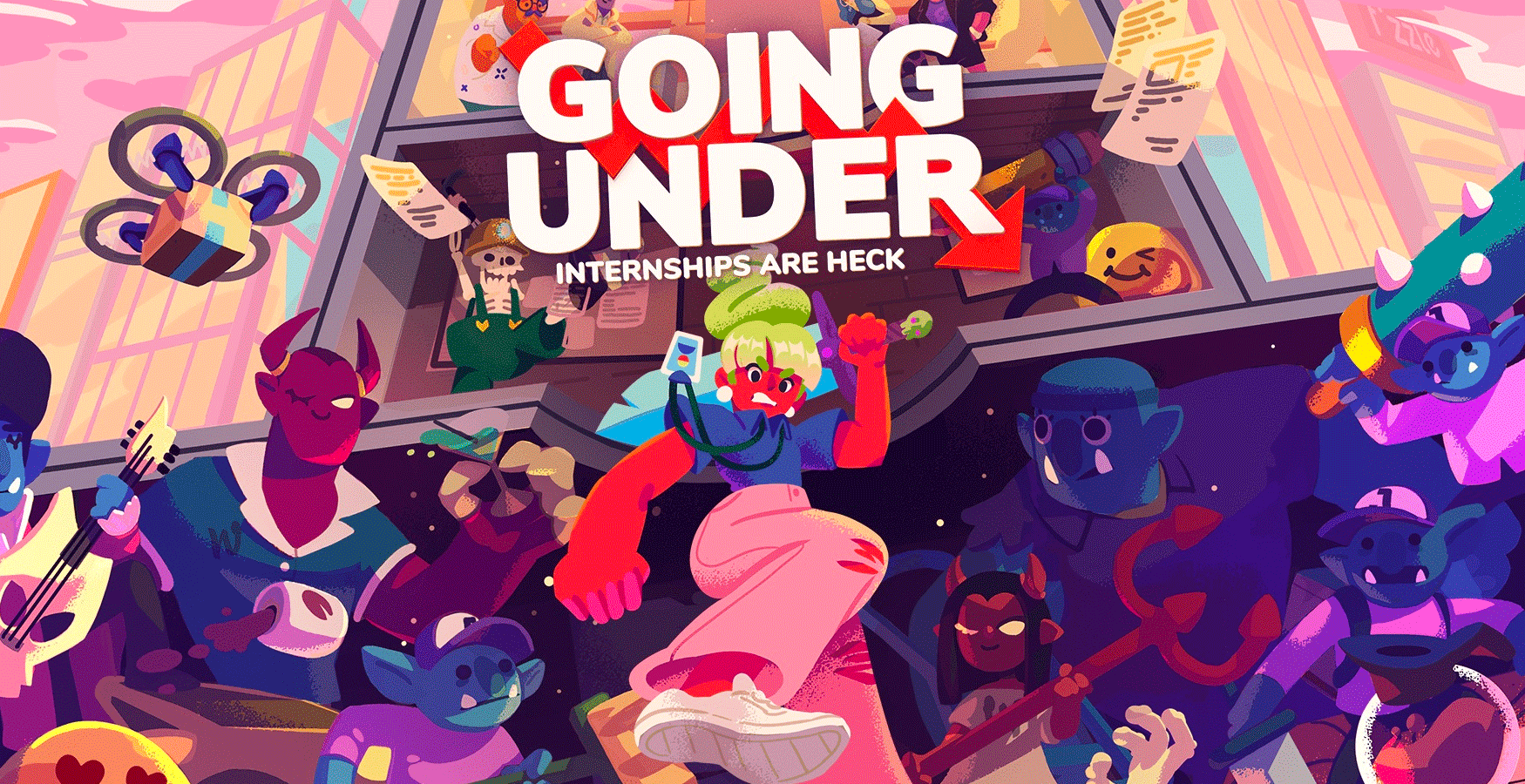 What with the release of Spelunky 2, Hades and even Rogue Legacy 2 entering Early Access, this year has become one when you’re not left wanting for exceptional roguelikes. Going Under is a colourful, yet far more satirical take on this ‘grind and get better’ conceit, hoping to add a new spin on this popular indie genre by setting it through the lens of a Silicon Valley start-up company. If that sounds absolutely bonkers that’s probably because it is, but for the most part Going Under excels at delivering fun and varied combat, along with an addictive gameplay loop that will see you say “just one more run” countless many times.

Going Under casts you as Jacqueline, a budding young tween who has recently joined Fizzle as an unpaid intern in the hopes of making an impact with their latest soda flavours. It isn’t long, however, until her superior makes clear that she will instead be spending most of her time clobbering enemies in other start-ups (serving as randomised dungeons) that Fizzle’s parent company Cubicle has acquired. What follows is a chaotic descent to find the best skills, apps and weapons, all in the hopes of reaching each dungeon’s boss and gaining several useful artefacts.

The satirical consumerist theme is one of the main ways Going Under intends to set itself apart from the sea of other roguelikes on the market. The good news, though, is that a premise that could have so quickly become grating is actually well-handled, largely because it permeates through everything. A good example are the melee items. Littered throughout most dungeons you’ll not only find swords, hammers, and other weapon staples, but broomsticks, desks and paper binders equally can have an adverse effect on the legions of enemies you’re sure to bump into. And we’ll be honest, having new apps and armaments delivered to us via drone never got old.

There are three main procedural start-up companies featured in Going Under, all of whom boast their own theme and unique set of enemy types. The first one you enter is called Joblin and - as its name clearly indicates – is an intentional parody of Linkedin, to the extent that all the foes you face inside this dungeon serve as goblins dressed as gig economy workers. Then you have Styxcoin, which takes heavy inspiration from cryptocurrency companies, styled as a literal mine complete with its own currency. Then lastly there’s WinkyDink, a Tinder wannabe centred on romance and features a final boss that can be a bit “handsy” if you catch our drift. 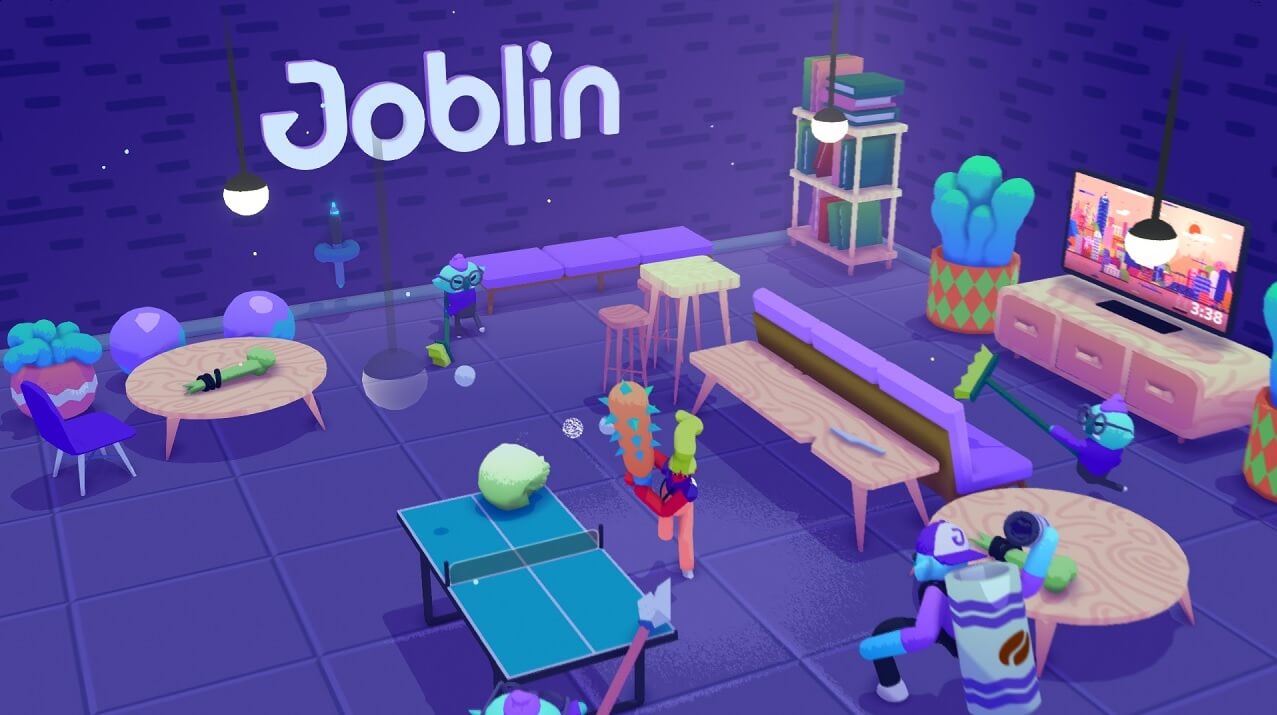 All three dungeon types change from run to run as per any roguelike, but the fact that each tout their own colour scheme, weapons, enemy types and bosses helps Going Under maintain a freshness that it would otherwise lack. It also doesn’t hurt that this is one of those rare indie roguelikes brave enough to give you control of the camera in a 3D space, which might not sound like much of a game-changer but can make all the difference between a win or a fail when you’re trying to dodge immeasurable hazards with just one heart left.

Almost everything in Going Under is a weapon, as mentioned earlier, but ensuring that no run ever plays out the same are a series of skills, apps and mentors. Skills serve as temporary upgrades/boosts that stay with you for the duration of any dungeon run, while apps can be picked up and activated to gift you with temporary abilities like a goblin partner or a perfectly primed distraction. Then, if you’re willing to complete an optional objective for one of your many colleagues found within Fizzle’s hub, you can equip them as mentors to receive bonus items or discounts when visiting an in-dungeon shop keep. 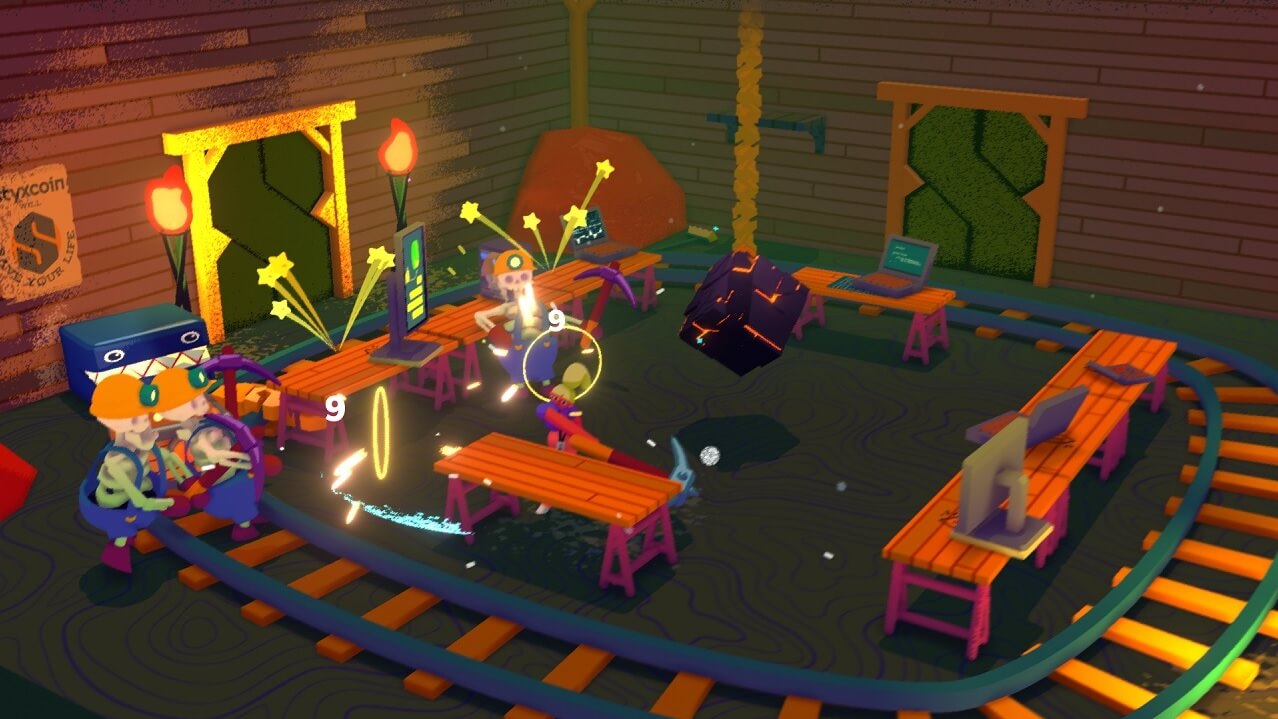 As you can most likely tell from its satirical tech-infused premise, there is a hint of a narrative present in Going Under. And while not the deepest or most original, it’s nice to have an established beginning, middle and end within a roguelike such as this. Completing each dungeon the first time around doesn’t actually take that long, but as you’ll soon see gaining all three artefacts and defeating the final dungeon is just the beginning, as going into each of them again is quickly made more challenging via higher-powered enemies. Don't fret though, because your Jacqueline will be going in stronger, too.

In a year stacked with top-tier roguelike releases, Going Under does just about enough differently from the heavyweights to make it worth a look. It’s cheeky sense of humour results in countless laughs, and the fact that it permeates into gameplay helps tie the whole thing together in a neat (though sometimes punishing) bow. Just be warned: Once you’ve clobbered a high-flying bat using a disembodied skull once, it can be very hard to put Going Under down.

Going Under release on Nintendo Switch, PS4, PC and Xbox One on September 24th, 2020.

Pick up Going Under with the best price on digital currency: