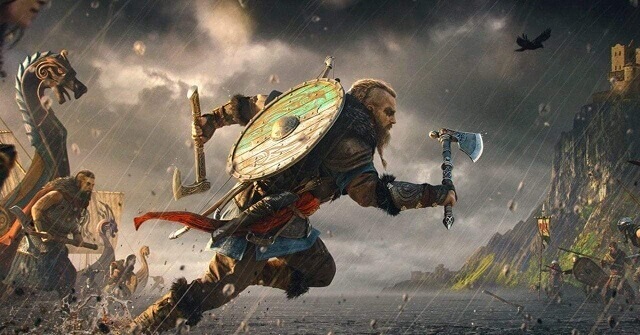 There are many reasons to love the latest instalment of Ubisoft’s trademark open-world series, but I think the moment when everything clicked for me was during my pursuit of an Anglo-Saxon warrior. Fleeing from the village longhouse that I had just invaded, our chase quickly moved from land to sea with me arrowing her designated driver. From there, realising not all hope was lost, she tried to further flee again by swimming to shore. But little did she know that by jumping in too and comically calling my horse to swim alongside, it was all too easy for this deadly assassin to claim their prize.

Average players might be content with eagle dives, routine stabbing and looking like a fearless Viking, yet more so than most other entries Assassin’s Creed Valhalla is rife with the means to create improvisational moments like this. And once they all start to add up and combine with interesting characters, a surprisingly cohesive story, and a small but richer world brimming with detail, the angst I felt towards 2018’s Odyssey soon slipped away. Somehow, it’s more fun to explore Grimsby (and the rest of 9th century England) than all of Ancient Greece. That’s the real Greek tragedy!

Assassin’s Creed Valhalla feels so renewed due to its stripping back of convoluted systems. Any fat that plagued Odyssey and even Origins has been done away with, a good example being how loot is now how handled; or rather how it’s not. Whereas previously you’d constantly be picking up higher-tiered equipment, spending endless hours in the menu to compare stats for the sword you’ll use for maybe the next 10 minutes, Valhalla scraps this constant pursuit for purple gear in favour of meaningful weapons and armour. Not anymore do you throw things away or sell them for pittance, instead upgrading and switching between different item sets to always keep them useful.

It’s just one of many areas in which Valhalla takes the proven Assassin’s Creed format, along with its continued RPG-ification from the past few years, and sees them meet perfectly in the middle. I could go on about how locations no longer being level-gated helps reduce grind, the smaller map size makes it less of a pain to get around, and having the shield back allows for more flexible combat opportunities. Odyssey felt like it was ashamed to be an Assassin’s Creed game, to the point that the order and all it stood for was entirely absent; Valhalla goes out of its way to earn back your respect.

This sentiment even translates to the story. By shifting the clock forward almost a millennium after Christ walked the Earth, the order of Assassins is back. And though Eivor – playable as male or female – is dedicated to a different kind of creed made up of drinking, pillaging and flyting, it isn’t long until he’s equipped with a familiar hood and hidden blade and sent packing to England. After arriving, establishing the raven clan’s dominance involves linking up with other recent Scandinavian settlers, building up your settlement and challenging the royal rule of England’s four kingdoms.

Valhalla’s big new core feature, raiding, is key to achieving success in all three of these goals. Playing out as large battles where your clan must take over an entire village, they don’t differ all that much from taking down enemy encampment in prior titles. Their nature to involve all your Viking brethren, however, gives them an epic feel. Sure, you can choose to don the hood and stealth kill as many guards prior to battle, but as soon as you pull out that horn to call allies the skirmish starts proper. Blood will be shed, valuables plundered, and you’ll almost always find a new combat ability.

Speaking of which, upgrading Eivor is a relatively straightforward affair, with arbitrary levels now replaced with what’s known as Power, where you pour any points acquired from regular XP gain into minute gameplay buffs that then go on to let you unlock better abilities. These differ from your combat abilities deployable in battles, which as mentioned earlier are most often discovered by picking up books of knowledge found in enemy villages during raids. Multi-arrow targeting, shield bashing, and crushing axe slams… there’s lots to seek out and equip, making your Eivor a much fiercer Viking warrior.

Discovery also feels more natural in Assassin’s Creed Valhalla. Players constantly annoyed or made anxious at the site of a map littered with question mark icons can rest easy knowing that Ubisoft has gone for a tidier route. Points of interest are instead broken down into three categories: mysteries, artefacts, and wealth, which are all given a different colour. Artefacts and wealth are pretty self-explanatory as different collectibles. Mysteries, though, help guide you to unique world events that are indicative of the more improvisational instances I mentioned at the top of this review.

You can definitely tell that Valhalla has taken yet another leaf from The Witcher 3’s rulebook in this regard, with world events placing less emphasis on repetitive side missions and fetch quests. They could be something purely as simple as burning down a couple’s house to provide them with some much needed stimulation, hunting down a lady’s comb to potentially be her suitor or removing an axe from a gentleman’s head upon his request. Little stories like this help to flesh out this lusciously green rendition of 9th century England as a real place full of charm and character. You’re never completing a quest just to tick a box. 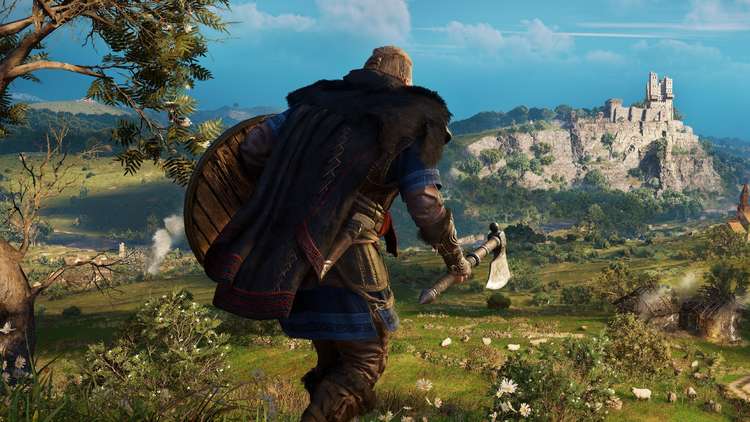 In terms of the world, each of England’s four distinct regions boast a slightly different look and feel. The map might be far smaller than the one we got in Odyssey and Origins, but this has allowed Ubisoft to populate it with richer activities that prioritise quality over quantity. Plus, there being less emphasis on ship traversal and ship combat means you spend less time staring at a screen full of endless ocean while travelling. Small cities like Lincolnscire, Lunden, and Essexe feel a lot less ‘copy/paste’ than the cities we got with Ancient Greece, and bookending the campaign with the snowy sights of Norway only adds further variety to your surroundings.

As veteran fans will know, a recent trend for the series has been to skip over the modern-day goings on between the Assassin order and Abstergo. This is largely the case once again in Valhalla, though without giving too much away, I did come to appreciate the return of classic characters like Shaun and Rebecca who take up minor roles in Layla’s story. Layla herself is used both in and out of the Animus segments in more interesting ways than before.

The last thing to say is that, for all its beauty, Assassin’s Creed Valhalla can sometimes be a technical mess on PlayStation 4. From the odd textureless environment to some janky-looking NPCs, there’s definitely too many bugs in here than what you’d typically expect from a Triple-A open-world game. In one instance an early boss fight sequence completely froze, to the extent that I could just repeatedly slash at said boss to win. Regularly quick-saving from the options wheel, however, shouldn’t see any game-breaking issues arise.

Though my fondness for the series had been in doubt since it drifter further and further away from its Assassin-centric appeal, Valhalla is proof that there can be a happy medium between where Assassin’s Creed has been and where it’s going. It’s so refreshing to not have to grind to proceed to the next story point or spend an inordinate amount of time in menus weighing up meaningless numbers. Valhalla instead can’t wait to unleash you into a rich world yours for the taking, letting stories and world events play out so naturally that not even a few glitches can take away from them.

After a disappointing and overly bloated previous entry, Assassin's Creed Valhalla sees Ubisoft's open-world stab-a-thon series arrive back on top. 9th century England may not be as luscious as Ancient Greece, but its world is much richer with unique stories to find and there's plenty of ways in which to tackle it. Early technical woes at launch does hold the full experience back, though it's not enough to ever prevent you from feeling immersed.

The Assassin's Creed Valhalla is out now on PS5, Xbox Series S|X, PC, Xbox One and PS4

Buy Assassin's Creed Valhalla for the lowest price below: