E3 2021: Xbox and Bethesda digital showcase – all the biggest announcements 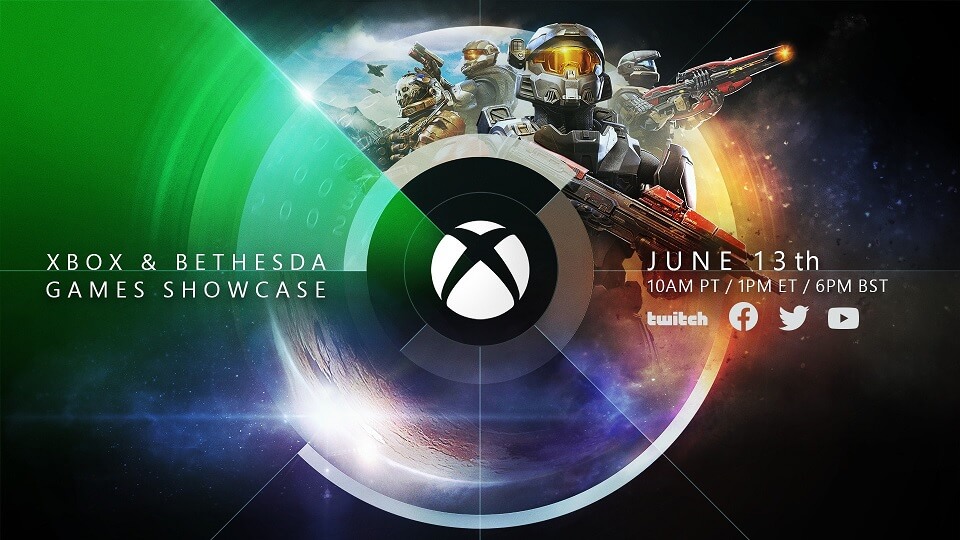 With the warm-up acts now safely out of the way, the stage was set for the joint forces of Xbox and Bethesda to show everyone else how an E3 digital showcase was done. The presentation featured back-to-back games, with trailer after trailer giving extended looks or outright new reveals at 30 games – 27 of which arrive on Game from Day One.

Want to know what you missed? There was certainly a lot to get excited about, so we’ve put together this round-up blog covering all the major teases, trailers and gameplay demos that were shown. Here’s what you’ll soon be playing on your Xbox…

Starfield is an Xbox exclusive, gets a pre-rendered teaser and a release date

Todd Howard opened the show with an in-game teaser for Starfield, the hotly anticipated Sci-Fi RPG from Bethesda Game Studios. It was a very atmospheric teaser, truth be told, with a just a brief glimpse of astronauts, a rickety spaceship and an oh-so serious voiceover which served to set up the tone of the game’s universe. “It’s all that we’ve been working towards.” Xbox Players likely feel the same.

The teaser may have been totally pre-rendered, but it still served to highlight just how optimistic Starfield is set to be compared to the Fallout franchise. It was confirmed to be an Xbox console exclusive and was given a release date of November 11th, 2022.

STALKER 2 gameplay reveal demonstrates a harrowing universe to survive in

It wouldn’t be an E3 conference without at least one game giving us a post-apocalyptic setting to explore. This came early on during the Bethesda/Xbox showcase, courtesy of GSC Game World’s STALKER 2. The gameplay video showed a lot of sneaking around in the irradiated Earth, as well as some gunplay against some terrifying mutants.

There appears to be a heavy emphasis on story as a lot of the in-engine gameplay concentrated on Russian dialogue and storytelling around a campfire. If you’re into the Metro series this will likely do it for you – STALKER 2 looks just as beautiful, too. It’s coming exclusively to Xbox Series X|S and will be a day one release on Game Pass.

It seems like such a match made in heaven that it’s surprising it hasn’t happened before now. Soon, players who enjoy playing Sea of Thieves with friends will soon get to do so with characters from Disney’s iconic Pirates of the Caribbean franchise. Captain Jack himself made an appearance, as did his arch nemesis Davey Jones, indicating that it will be a rather expansive piece of content.

The Pirates of the Caribbean crossover comes as part of an epic new original storyline arriving exclusively on Xbox consoles this June 22nd. It’s titled Sea of Thieves: A Pirate’s Life and will be made free for all existing players.

After several delays, Psychonauts 2 looks better than ever and is set to arrive August 25th

It’s been so long now since Psychonauts 2 was originally announced, you’d be forgiven fir wondering whether the game exists or not at all. Luckily, today’s Xbox E3 presentation proved that Double Fine hasn’t lost its touch when it comes to zany humour and charming characters. The game looks better than ever in this explosive new gameplay trailer.

The biggest Psychonauts 2 news, though, was that it finally got a release date. You’ll be able to enjoy another mind-hopping adventure as Raz this August 25th. And, of course, like every first-party Xbox game Psychonauts 2 will be free to Xbox Game Pass members on Day One.

Physics and being friendly with other players are both out the door in every game of Gangbeasts. Today Xbox revealed a new game called Party Animals, which seems to be tapping into a similar vibe by letting you and friends control a roster of crazily cute animals that compete in crazy games. Though not given an exact release date, Party Animals is expected to release directly into Xbox Game Pass.

Party Animals places a large focus on online multiplayer and competing with friends, as you might imagine, and the games on display certainly looked anarchic. Grab a controller, choose a fuzzy fighter and have fun trying to be the last animal standing.

Halo Infinite is the Xbox exclusive game that doesn’t seem to ever want to come out. However, 343 Studios made up for its many delays by showcasing a fresh look at the game’s story as part of today’s Xbox/Bethesda digital E3 showcase. It again centred heavily on Master Chief’s relationship with Cortana, showing him still on the hunt for his precious AI friend.

The Halo Infinite potion also really hammered home the fact that Halo multiplayer will be free to play when it launches later on this year in the holiday season. Whether you’re playing on PC or Xbox, Halo Infinite’s many competitive modes will be free to access for all and entirely cross play between platforms. This news was accompanied by a deep look at the multiplayer’s gameplay, and seems to strike the perfect balance between the new and familiar. No hard release date was given.

A Plague Tale: Requiem is a sequel to the original, coming in 2022

One of the moodiest trailers of the night came courtesy of Focus Home Interactive, with the reveal of A Plague Tale: Requiem. It’s a third-person action-adventure game that very much looks to be keeping with the original game, A Plague Tale: Innocence, again concentrating on the bond between sibling characters.

The trailer shown was just CG, but the hordes of rats look just as terrifying as ever. It will come to Xbox as a day one release on Xbox Game Pass some time in 2022.

The ‘Shroom and Doom’ update brings sitting, hats and more to Xbox’s Grounded

To celebrate a year since the release of Obsidian Entertainment’s Grounded, the game will soon be improved with more content via the new ‘Shroom and Doom’ update. It adds all kinds of new stuff such as hats, the ability to sit (not kidding) and more mushrooms. The big tease at the end of the trailer, though, was the menacing Brood Mother, who doesn’t look like someone you’ll want to cross during you’re miniaturised garden adventure.

The Outer Worlds 2 is officially confirmed, gets a self-aware trailer

Having not been the subject to any rumour or leak heading into tonight’s digital showcase, it was a genuinely surprise to see that, despite also working on Avowed, Obsidian is now also working on a direct sequel to The Outer Worlds. The trailer also found the time to poke fun at how must E3 trailers for Triple-A games go, indicating that the satirical humour has been kept intact.

Forza Horizon is back with a fifth entry, coming November 9th, 2022

Another big surprise for Xbox’s E3 showing was the news that Forza Horizon 5 would be coming as early on November 2022. Playground Games’ creative director Mike Brown revealed that the game will feature a new campaign mode called the Expedition, where players will drive through environments seeking for new places where the titular Forza Horizon festival will take place.

This time players will be driving through Mexico, which will be rendered using top-notch visuals thanks to the next-generation of Xbox consoles in the Series S|X. Multiplayer was also discussed a little, with Forza Horizon’s drop in/drop out gameplay once again returning. A new mode called the Events Lab will allow players to create their own tracks and experiences. There’s no two bones about it, Forza Horizon 5 looked absolutely stunning in the gameplay shown. Almost every location has been created to deliver photo-realistic visuals, which when combined with Horizon’s trademark arcade racing gameplay, should make for a stunning Xbox exclusive this November.

The Xbox/Bethesda showcase ended with a trailer showing Arkane’s latest game, RedFall which will also be its first Xbox exclusive game since the platform acquired them earlier this year. The trailer did a good job at depicting all the crazy characters that will feature, and was presented in the style of cult classic 80s movies. There was creepy red text to break the action up and everything. Needless to say, this is an open-world horror shooter worth keeping an eye on.