Call of Duty Vs Battlefield – Which blockbuster first-person shooter is best? 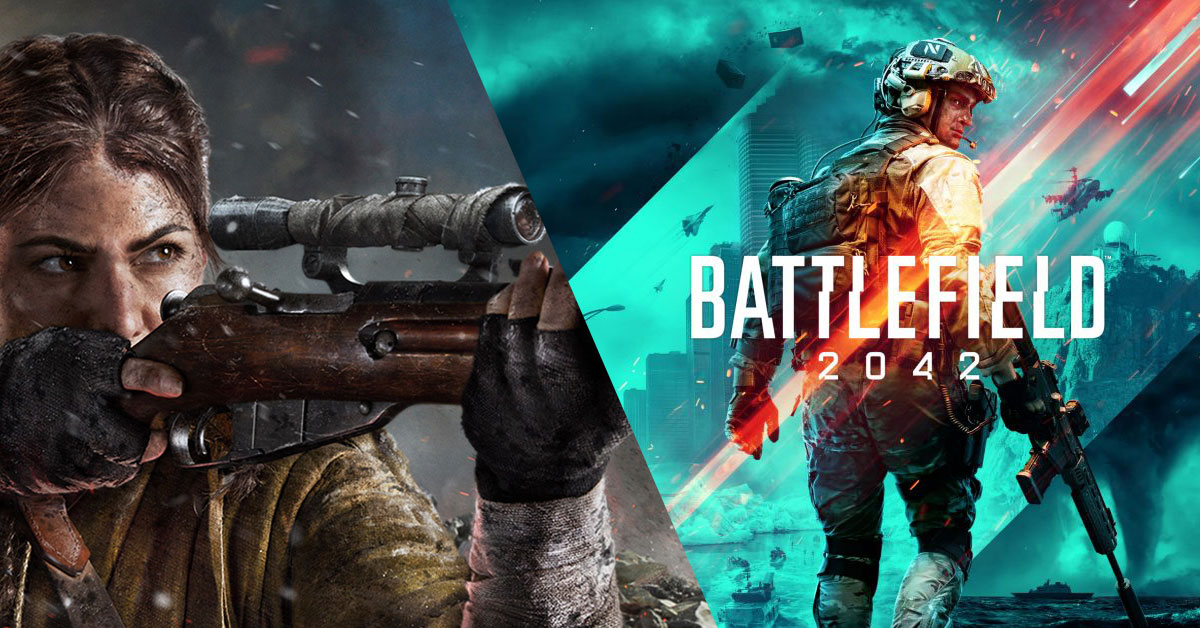 There’s no shortage of great online first-person shooting games to choose from these days, but there are two blockbuster franchises jostling for your time, attention and dollar more than most: Call of Duty Vs Battlefield – which one is better? By now it’s a question as old as the hills, but luckily there are some stark differentiations between the two. Especially in recent years, the two series have opted for a slightly distinct flavour of FPS in order to stand apart. That’s good for variety, yet can make the Call of Duty Vs Battlefield debate a tad trickier.

That’s why we’ll be discussing and weighing up the benefits of Call of Duty and Battlefield in the article, helping you to decide which first-person shooting franchise is likely best for you these days. Both games have an avalanche of series entries to choose from, so for the purposes of this debate will mainly be focussing on each’s latest, namely Call of Duty: Vanguard and Battlefield 2042. Whether you play on Xbox or PlayStation, here’s all you need to know about the long-debated argument.

Call of Duty vs Battlefield – Campaign

While the single-player portion of both Call of Duty and Battlefield has been scaled back significantly in recent years, it’s still a vital component for players who enjoy playing through a rollercoaster ride-style campaign. First up, Call of Duty. It’s latest incarnation, Call of Duty: Vanguard, is based in WWII, and as such aims to tell an interesting tale set towards the end of the global effort where you play as multiple characters from very different backgrounds. This crack team makes up the world’s first Spec Ops unit, acting as a conduit in which to experience various eye-widening set pieces. Such spectacle is backed up by some rather nuanced storytelling, and Call of Duty’s trademark tight gunplay.

Battlefield 2042, by comparison, features no single-player campaign to speak of whatsoever. This obviously makes it a poor choice for those who value being able to experience a dedicated story offline. However, if you roll back to the series by just one entry, Battlefield V features a short but sweet narrative portion for solo preferring players to enjoy. It again takes place from the perspective of multiple characters, letting you pilot tanks, storm Nazi camps and play stealthily as required. Overall, both franchises have you covered, providing you’re willing to look for it.

For most players, online multiplayer is the area where the whole Call of Duty vs Battlefield argument matters. And thankfully, there’s a very clear distinction to be made between the two. Battlefield has always been, for instance, about large-scale multiplayer maps and even larger scale environmental destruction. Running on EA’s super-powerful Frostbite engine, it’s been designed from the ground up to have the buildings, vehicles, and locales around you react and transform depending on your actions. If you take cover behind a cement wall, to use an example, there’s a high chance it’ll be blown away if you come under heavy fire.

Set in the near future, there’s more opportunities than ever to benefit from such incredibly flexible map design in Battlefield 2042. Combine this with the sheers scale of the franchise’s maps that now allows up to 128 players to duke it out simultaneously on PS5 and Xbox Series X, and Battlefield benefits from a scale rarely seen in Call of Duty. That said, Call of Duty: Vanguard reinforces the series’ expertise in relation to close-quarters combat. Tight corridors and long sight-lines are found throughout many Call of Duty maps, and the time-to-kill is sped up as a result.

There’s also a larger pool of popular modes to choose from within the Call of Duty franchise. Because while most people who play Battlefield tend to routinely favour “Conquest” and “Breakthrough”, Call of Duty’s “Domination”, “Team Death-match” and “Search & Destroy” are constantly flooded with players. This makes for a modern take on online multiplayer that is a lot more varied. Plus, maps being slightly smaller means you’ll spend less time waiting for other players to pop their head around the corner.

Call of Duty and Battlefield might both be Triple-A first-person shooters on the surface, but the truth is that the act of firing weapons feels very different in them. Call of Duty, for the longest time, has had the upper hand for most people, largely because the series has had over two decades of experience to perfect what it means to aim down your sights or fire from the hip. Call of Duty’s shooting mechanics are known for their responsiveness, offering controls and a level of sensitivity that is wildly customisable to each player’s liking.

Battlefield, by comparison, has gunplay that is solid but perhaps a slight step back from Call of Duty. Like the latter, it is indeed incredibly responsive, but lacks a little of the snappiness that comes from such speedy matches. Taking out a rival player in Battlefield is a real test and challenge, to the point that if you catch someone in your eye-line it doesn’t take many squeezes of the trigger to put them down. However, Battlefield 2042 introduces a raft of future-set weaponry that adds a different flavour to the gunplay, especially compared to the more historical weapons seen in Call of Duty: Vanguard.

Overall: There really is no wrong answer when it comes to which blockbuster shooting franchise to invest in. Both deliver immersive action and relatively tight gunplay, particularly when you take the action online. The only real area where one series falls down is in Battlefield 2042’s complete lack of single-player campaign. That said, you can always check out other instalments like Battlefield 1 and Battlefield V if you want a classic-style campaign. The latest incarnation of Call of Duty has you covered on all aspects, true, but it does lack Battlefield’s destructive environments. There are pros and cons to both, so the choice is yours.