11 months ago by Aaron Potter
0 Comments 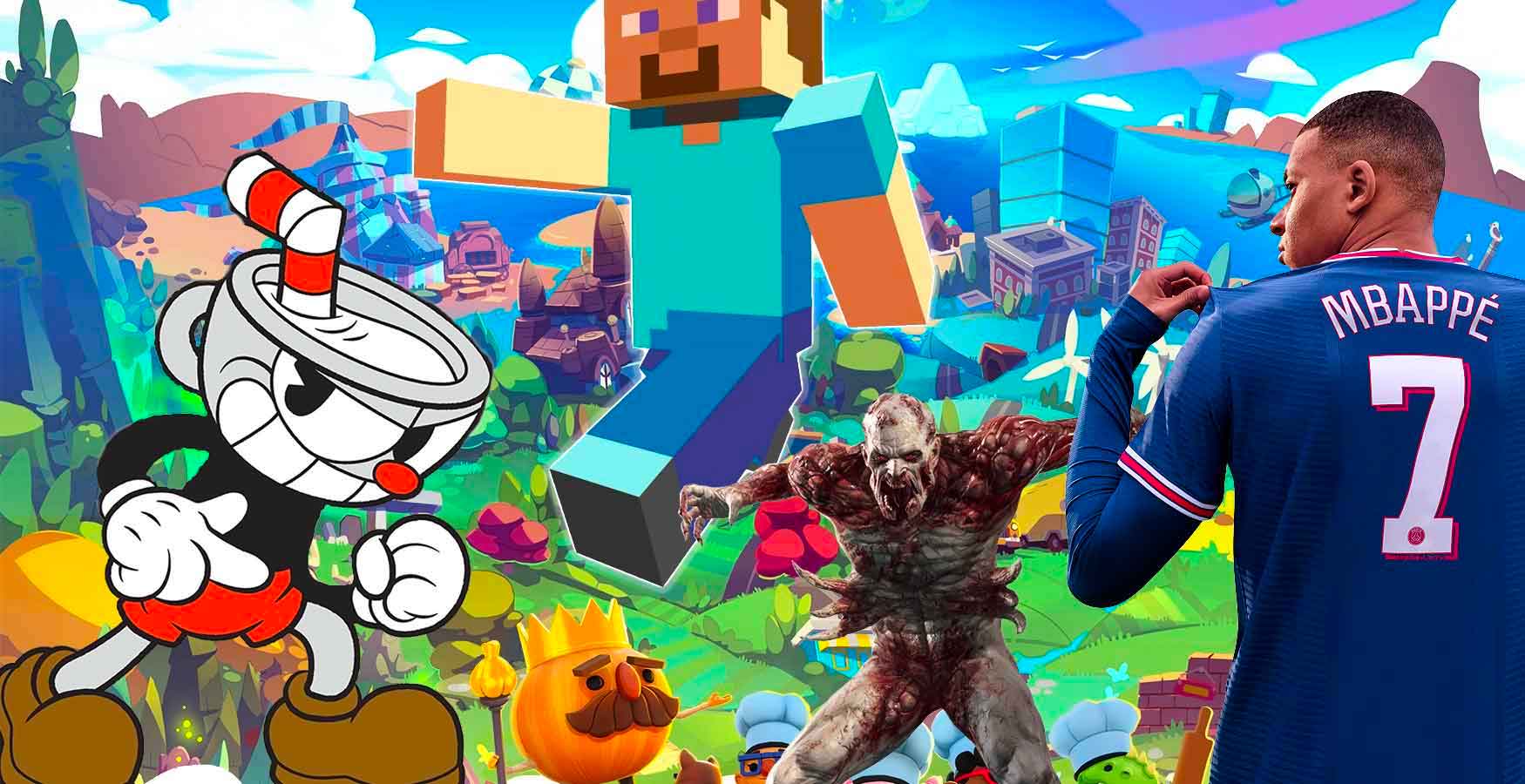 The modern miracle that is the internet is great for a lot of things: looking up recipes quickly, checking the weather, but most importantly staying in touch with friends and family by playing the best 2 player games online. Yes, why play a great game alone when you can team up with a buddy and experience its wonders together? Whether you play on PlayStation, Xbox or Nintendo Switch, there’s plenty of co-operative treats available for teams of two to play.

That’s why we’ll be running through the 10 best 2 player games online as part of the following list, regardless of your chosen console platform. That’s right! All of the following games are available on PlayStation, Xbox, and Nintendo Switch in some capacity, supporting online co-operative play to make enjoying games easier than ever before. Let’s take a look…

While it can be all too tempting to simply shrug Fortnite off for being the popsicle-flavoured popularity contest it’s often presented as, there’s a reason why Epic’s global hit continues to go from strength to strength. Its ability to offer a safe online environment for you and friends to try and be the last player standing is the perfect template for a successful third-person shooter, and Fortnite’s constant pop culture crossovers ensures there’s always something different to see.

The battle royal craze may have somewhat subsided in recent years, but that’s only because few others are able to pull it off as well as Fortnite. There’s a strong chance that you and your friends will have likely already jumped online into it at some point. That said, it remains a strong choice on all platforms and is there for one of the best 2 player games online.

FIFA’s latest incarnation is as solid as ever, featuring a refreshed roster of clubs and all-new ball physics mechanics that sees the beautiful game play out incredibly realistically. Does it play best on PlayStation 5 and Xbox Series S|X? Absolutely, but players on Nintendo Switch can still have a lot of fun playing as their favourite teams, either on the same side or while duking it out by punting shots into the back of their friend’s net.

FIFA 22 is one of the best 2 player online games for PlayStation, Xbox, and Nintendo Switch because it features over 17,000+ players, 90 stadiums and 700 teams. Such consistency is why the FIFA series remains the world’s top football series.

We find it hard to believe that any player out there is yet to at least dip their toe into Minecraft. However, if you just so happen to fall into this category and are seeking an ideal game for you and a friend to play together, you needn’t look any further. Minecraft is the ultimate creative sandbox in video games, giving you the tools to meticulously generate your own worlds, architecture, and ideas. What’s more, the game’s low-fi, polygonal aesthetic means it offers the same experience across all console platforms.

Whether you want to try and last for as long as possible in Minecraft’s Survival mode, or just party up with a friend and start up an ambitious project in Creative, the game is a very flexible platform that suits a multitude of play-styles. Minecraft is one of best 2 Player games online because the only limit is your imagination.

The sequel to the zombie-themed open-world-em-up may have just released, but believe us when we say that the 2015 original still has its co-operative merits. Dying Light won’t be winning any awards for its story, sure, but tying together the undead infested city of Harran is one of the smoothest parkour systems you’ll see in all of gaming, made even better when you’re joined by a friend. It won’t take long until your hopping over ledges, rooftops, and even zombie heads themselves when you’re character is upgraded.

If that wasn’t enough to warrant Dying Light being one of the best 2 player games online for PlayStation, Xbox, and Nintendo Switch, it’s melee combat system is also a highlight. This is precisely because each weapon can be enhanced and upgraded using any materials you find, until eventually you and your teammate are wielding electrified bats and other crazy combinations when wading through endless piles of flesh-eaters.

The original Darksiders trilogy were fairly standard third-person action games. However, for this fourth go-around publisher THQ wanted to do something different, transforming the camera into a top-down perspective and letting you and a friend tear through hellish enemies alongside each other. Darksiders Genesis is technically also a prequel to the first game, meaning that any co-op preferring players can jump online without any pre-existing knowledge required.

One of you will play as War, the disgraced horseman from the first game. His mighty Chaoseater sort is great for up-close melee combat, making him a danger to any enemy willing to step within 5 feet of him. New character Strife, meanwhile, is primarily a ranged character, shaking things up by letting player 2 cause much destruction from afar. This disparity between its two central characters makes Darksiders one of the best 2 players games online for every platform.

It might be solely responsible for breaking up several relationships, but that doesn’t make Overcooked! 2 any less crazy or chaotic when played with a friend online. This is a culinary kitchen game like no other, tasking you and a friend to prepare, cook and then deliver as many orders as possible within the given time limit. It’s not purely that simple, however, as stages grow more unpredictable as you go on.

Overcooked! 2 supports up to 4 players, so by default it easily charts on this list of the best 2 player games online. That said, being successful in all your cooking endeavours requires a great deal of patience and communication. Otherwise you won’t stand a chance of navigating the increasingly experimental levels and get out all the various orders online. If you thought the first game was tough, wait until what awaits you and a friend when you come back for seconds in Overcooked! 2.

It’s hard to believe that the original incarnation of Diablo III released almost 10 years ago now. But how cool is it that it’s a top-down co-operative dungeon crawler we still can’t help but come back to? It’s the difference in how all Diablo III’s classes play that keeps you coming back for more, encouraging repeat runs while assuring that no one play through ever need play out the same. Of course, the story won’t change and adapt around you, but the levels themselves will – and that’s enough to keep the action fresh a decade on.

Plus, Diablo III still remains quite the looker. It may appear dark and moody on the surface (you do venture into the depths of hell, after all). But Blizzard was able to work wonders with art design that still holds up to this day. You and a friend get to plunder your way through multiple realms in search of the best loot, always looking incredible doing it.

One of the cutest 2D action platformers in recent years is also one of the hardest, as Cuphead challenges you and a friend to blast your way through a gauntlet’s worth of creative bosses. Heavily inspired by the art style found in 1930s TV serials, this is simply a gorgeous game to look at, with hand-drawn animations further bringing the cartoon world of Cuphead and Mugman to life. Sadly, you won’t be to enjoy it leisurely, as 2-player teams will need to think fast on their feet after our titular hero makes a deal with the devil.

Your primary method of dealing with enemies is through shooting, dodging the attacks of the various forthcoming waves while adapting to any boss’ attack patterns. Once you wrap your head around it, though, Cuphead is easily one of the most fulfilling best 2 player games online available on PlayStation, Xbox and Nintendo. Just be prepared to “git gud” if you hope to see the end.

Got a spare 200 hours? You might need them if you hope to undertake the ultimate fantasy quest waiting for you in Divinity Original Sin II. This is a classic-style CRPG that lets you and friends create a class and make decisions within a deep, sprawling world. There’s a reason that this is considered one of the best roleplaying games ever made. Will you choose to play as a flesh-eating lizard? A highborn wizard or perhaps an undead human recently raised from the grave?

Divinity Original Sin II requires absolutely no knowledge of the first game, instead encouraging you and a friend to jump in online and quite literally forge your own path. Up to 4 of your can hop in and play together, yet it plays just as brilliantly with teams of two, letting you fight your way to save the land using thrilling turn-based combat and great character relationships.

Overwatch remains the go-to hero shooter for many people around the world, featuring a colourful cast of characters and tight first-person gunplay mechanics. There are seven competitive modes for you and a buddy to take part in, educating yourself in each character’s unique abilities so as to turn the tide of battle. Overwatch 2 may have since been announced, but this first game continues to be a regular feature on the eSports scene and is supported until this day.

The game’s colourful art style ensures that it looks great on PlayStation, Xbox and Nintendo Switch. Whether you want to play as the high-flying tracer or hope to slow down members of the opposing team using Mei’s ice-based powers, no match of Overwatch ever needs to play out the same – and it always looks spectacular. If the drab world of online military shooters like Call of Duty aren’t doing it for you, Overwatch might be the answer.

There you have it, our list of the best 2 player games online. Do you agree or disagree with us? Think we have missed anything? Let us know your thoughts in the comments below.