5 Reasons to be excited for Kirby and the Forgotten Land

10 months ago by Aaron Potter
0 Comments 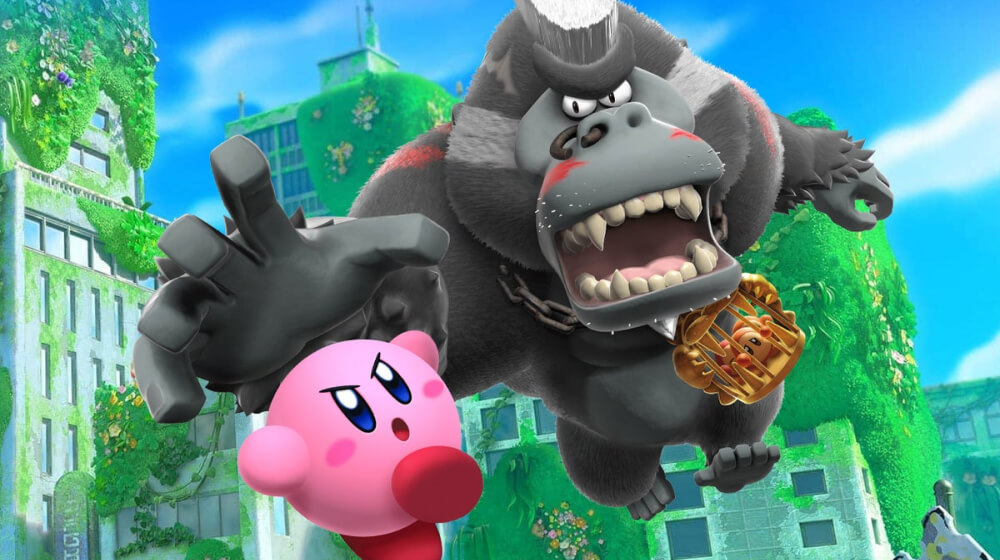 Not content with releasing one giant, mega-hit based on one of its most popular franchises (we’re looking at you Pokémon Legends Arceus) this year, Nintendo is continuing to eye the early 2022 crown with the return of another cutesy mascot. In this case it’s Kirby, everyone’s favourite hungry pink ball starring in his biggest adventure yet. Kirby and the Forgotten Land launches this Friday exclusively on Nintendo Switch, and promises to be fun for all the family.
There’s a demo for the game available to download and try right now on the Nintendo eShop, but if you’re still unsure about whether Kirby’s 3D debut is for you, we’re here with some reasons to be excited. Kirby might not be the biggest Nintendo icon, true, but that doesn’t mean there isn’t still plenty of fun to be had. Why not celebrate Kirby’s 30th anniversary year in style?

Ever since Kirby arrived on the scene with 1992’s Kirby’s Dream Land for the original Game Boy, the floaty fella has (mostly) been left stranded walking back and forth on a 2D plane. Sure, Nintendo has slowly been adding more depth to these side-scrolling adventures, but only now can Kirby explore full 3D areas to their full capacity. For this reason players who pick up Kirby and the Forgotten Land at launch will find it plays much more closely to, say, Super Mario 3D World, as opposed to any previous Kirby game that’s come before it.

Being in 3D means that developer HAL Laboratory has been able to pack in a lot more detail into these colourfully post-apocalyptic locations. Plus, seeing as Kirby still has his core power of swallowing up enemies to temporarily, you’ll be able to float, hop, and fight your way through them in all manner of creative ways. Switching from 2D to 3D is always a big deal for any franchise, and the new dimension does well to bring Kirby and the Forgotten Land into the modern era.

Previous Kirby games have notoriously been criticised for being too easy. In some ways that’s not a bad thing. After all, it’s clearly positioned as a family-friendly platforming series, indicated by the cutesy characer designs, vibrant colour palette, and various fanciful locations. And while Kirby and the Forgotten Land doesn’t promise to reach dark souls levels of challenge, Nintendo has aimed to tip the balance so slightly by including two difficulty options. This is something never seen before in the franchise.

The two difficulty settings are: Spring-Breeze Mode and Wild Mode. Spring-Breeze mode, as you might imagine, is the more laid back of the two. While playing on this setting the level of challenge is set really low, with reduced enemy aggression, more health for Kirby, and fewer obstacles – it’s more akin to the classic Kirby experience. Wild Mode, however, leans closer to a traditional hard mode you might see in other games. It might be more challenging, but those who complete levels this way will gain more star coins

As already alluded to, Kirby has always had the ability to suck or hoover up his enemies in order to take on powers. He can still do that in Kirby and the Forgotten Land, but now he has an extra power: mouthful mode. This operates in a similar way to what occurred before, only now Kirby can quite literally get his mouth around inanimate objects to take on their unique traits. Trailers so far have shown that everything from snack machines to cars and tugboats can be engaged using mouthful mode.

Mouthful mode promises to make higher places easier to reach, alongside offering more methods of transport. Only in key areas will you be able to find compatible objects, hinting that it will also play into environmental puzzles and obstacles. So while the sight of Kirby wrapping his chops around all manner of everyday items might appear unsightly at first, rest easy knowing that each one had its use. Who knows whether mouthful mode will carry over into future games. Kirby and the Forgotten Land marks the feature’s debut.

We know, we know… you can pretty much say this about any first-party Nintendo Switch game, but the truth is that Kirby and the Forgotten Land promises to look amazing for players with a Nintendo Switch OLED. It’s a simply fact that, compared to a lot of other platformers, this latest Kirby game sports a gorgeous and vibrant colour palette. All of which will really pop on an OLED that has its brightness setting turned all the way up.

This isn’t to say that Kirby and the Forgotten Land won’t still look great when played in handheld mode on a Lite or original model Switch. Far from it. The improved HD coat of paint coupled with the new 3D environments work well to draw the eye, pulling you into Kirby’s world like never before. However, once you’ve had a taste of the titular forgotten lands on a traditional Switch, it might be beautiful enough to tempt you into an OLED upgrade.

No Nintendo platformer – 3D or otherwise – would be complete without a swathe of fun collectibles to seek out and hunt down. Fortunately, Kirby and the Forgotten Land very much has players covered on this front, encouraging you to play through levels more than once by hiding coins in various places. Alongside standard coins, there’s also blue coins, gotcha capsules and Waddle Dees to find.

The gotcha capsules, in particular, are well worth looking out for, seeing as you’ll be able to gaze upon a glorious in-game figurine for each one you collect. Plus, as well as the ones you’ll find sprinkled throughout the levels themselves, when returning to Waddle Dee Town you’ll see a gotcha machine. 10 coins is what it’ll cost to secure yourself a guaranteed figure. Whatever way you want to complete your collection in Kirby and the Forgotten Land and achieve 100%, you’ll have to keep your eyes wide open.

Top deals for: Kirby and the Forgotten Land