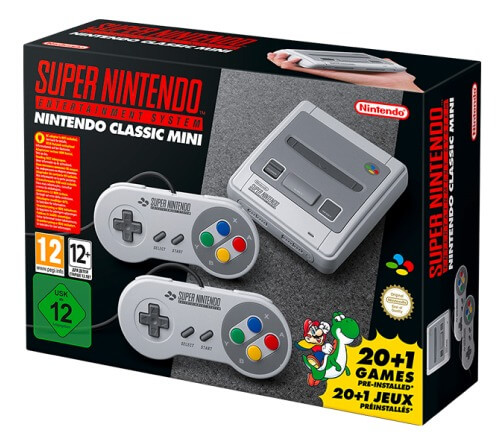 The best place to compare 1 different console bundles and deals in the UK for Nintendo Classic Mini consoles. With prices ranging from £267.00 to £267.00 and our state of the art filtering system, Gaming Deals is the only site you need to find your perfect Nintendo Classic SNES Mini deal for the best price out there.

Hot on the heels of the Mini NES, the Nintendo Classic SNES Mini builds upon the 16-bit Super Famicom originally released in 1990 to world acclaim. Offering improved visuals and increased gameplay possibilities over its predecessor, the Super Nintendo Entertainment System became an all-time classic that is still held in the hearts of many gamers. Classic series including Super Mario, Metroid, F-Zero, the Legend of Zelda, Donkey Kong and Mario Kart all experienced series’ landmarks on the console.

In recent times, nostalgia and recognition of the SNES’ classic status has made putting together a comprehensive library of Super Nintendo games a potentially expensive task. However, for those without the time to scan the pre-owned market, the Nintendo Classic Mini: SNES offers a fantastic, low priced way of getting all your old favourites on one system seamlessly.

The Super Nintendo Entertainment System – or “SNES” for short – marked a time when the once celebrated Japanese toy maker got serious about gaming. The console acted as the main competitor to SEGA’s rival console The Mega Drive, bringing with it a games catalogue of classic titles that are still thought fondly upon today. The Nintendo Classic Mini: SNES faithfully recreates the classic SNES design, being roughly about a quarter of the size for easy plug in-and-play functionality with any modern television.

Following the release of the original Star Fox, Nintendo’s EAD team got to work making a sequel. Star Fox 2 would iterate on the spaceship shooting action of the original, opening up the world by giving players more freedom to move about the screen and placing less emphasis on linear levels. Its development was sadly cut short just before the arrival of Nintendo’s next console, the Nintendo 64, leaving many wondering whether Star Fox 2 would ever see the light of day.

Star Fox 2 had previously been made playable on the ROM circuit, but The Nintendo Classic Mini: SNES marks the game’s first official release and the only legal way to play the game. Experience this long-thought lost classic with Star Fox and the gang, taking control of six playable characters to defend the planet Corneria from the invading hordes.

The Nintendo Classic Mini: SNES features 21 of the best games to ever release on the platform. Flittering through them all would take some doing (not to mention time), so Nintendo saw fit to include a simple-to-use menu system from which each can be accessed. The UI operates as a love letter to each one of the game’s original box art, offering up multiple screen size and visual display options. Prefer your 16-bit games with scan lines? Go right ahead.

Like the Mini NES before it, the Nintendo Classic Mini: SNES comes bundled with a HDMI cable and power adapter, getting you up and running in seconds. Just plug in, and away you go.

As we mentioned above, unlike the Mini NES, the SNES comes packed with two controllers out the box meaning you already have everything you need for you 2-player Super Street Fighter session.

The reason the SNES continues to enjoy such enduring popularity is its incredible library of games. Before the arms race truly began for the best graphics and processing power, Nintendo’s iconic Super Nintendo relied on an unrivalled library of games, and the SNES’s lifespan is testament to the overall quality of its titles.

The Nintendo Classic Mini showcases the best of what the SNES had to offer in both a single and multiplayer sense. Landmark single player adventures included one of the most popular Legend of Zelda games ever, A Link to the Past, the graphically striking Donkey Kong Country and of course Super Mario World, regarded by many as the greatest of Mario’s platforming escapades.

If you’re buying the SNES Mini for multiplayer, then you’re spoiled for choice, with Super Mario Kart, Star Fox 2 and Street Fighter II all offering hours of fun.

Regarded as perhaps the best entry in this legendary series, Contra III: The Alien Wars offers high octane side-scrolling shooter action. Set in the distant future, you must fight to save Earth from invading hordes of extraterrestrial enemies.

In 1994, at the dawn of 32-bit consoles, one game blew away the competition with its pre-rendered 3D graphics, cartoon-quality animation and atmospheric music – on the 16-bit Super Nintendo! More than two decades later, Donkey Kong Country remains arguably the series’ greatest game.

Few games in the SNES library can boast the same degree of fanatical devotion as EarthBound. The only game in the Mother series to be originally released in English, EarthBound’s quirky graphics and satirical humour has made it a firm favourite among hardcore SNES fans.

Even in a series as heavily populated as Final Fantasy, Final Fantasy III (actually the sixth entry in the canon) remains a stand out. Regarded by many critics as one of the finest RPGs ever, Final Fantasy III offers players a sprawling, highly involved adventure that rivals many of today’s major games for complexity and depth.

In the year 2560, the greatest racing competition is the F-ZERO championship. Pilots from across the galaxy risk their lives in a high-speed battle of turbo-charged hovercraft. Famed for its layered graphics that create the illusion of 3D graphics, F-ZERO spawned several hugely popular sequels.

Kirby stands out as one of Nintendo’s most beloved creations, and Kirby Super Star is one of the reasons why. Offering extremely well balanced platforming action with many of Kirby’s now iconic moveset - including the ability to inhale enemies - Super Star is yet another addition to the SNES’s library of iconic platformers.

Kirby’s Dream Course puts a new spin on golf, with Kirby as the ball and enemies as obstacles! Conquer eight different courses packed with water, spikes, conveyor belts and trampolines. Go it alone for a high score or face off against your friends in a local multiplayer contest.

On a dark and stormy night, young Link embarks on an adventure he – and you – will never forget! Even in such an iconic series of games, A Link to the Past remains a firm fan favourite within the Legend of Zelda canon, and is routinely cited as one of the greatest games of all time.

Set one hundred years after the original hero's adventures, Mega Man™ X stars a more powerful generation of robot known as X who – along with the maverick Zero – must take on a new threat: the reploids.

An RPG with a twist, Secret of Mana takes many of the elements found in iconic series such as Final Fantasy (of which Secret of Mana was marketed as part of) and adds the twist of removing turn based gameplay, replacing it with real time action. The combination is a game that makes players combine skill with tactics to progress.

The original Star Fox was a landmark game that offered players an experience they’d never had before. Flying through space and engaging in zero gravity dogfights remains as invigorating an experience as ever! And now, you can play the never before released sequel too!

Street Fighter II’s remarkable staying power is attested to by its recent release on Nintendo’s newest console, the Switch. However, if you’re a purist who wants a truly classic Street Fighter experience, then there’s no place better than on the SNES Mini. Of course, Hyper Fighting supports both single and multiplayer.

Though Castlevania as a series has seen its popularity and frequency of new releases wane over the years, Super Castlevania IV remains beloved for the incredibly moody atmosphere it created and its tight playing mechanics.

Part of the Ghosts ‘n Goblins series that is famous for its brutal levels of difficulty, Super Ghouls ‘n Ghosts won’t disappoint those who like a no holds barred challenge from their games. Fight your way across numerous haunted levels, battling against all kinds of evil forces.

The SNES was where perhaps the world’s most iconic driving game got its start, and now you can relive all the titanic battles of days gone by all over again. No matter if you’re a fan of Mario, Bowser or any of the other stars of this karting classic, there’s few games in history with as much replay value as Super Mario Kart.

Mario may have made the move to 3D over 20 years ago, but Nintendo’s repeated returns to the side-scrolling format owes much to Super Mario World. Even in such a storied and celebrated series, Super Mario World (much like A Link to the Past in the Zelda series) remains a high water mark for the Mario games, offering intricate level design and incredibly responsive controls.

Putting a twist on the classic Super Mario formula, in Yoshi’s Island you take control of the plucky plumber’s intrepid sidekick in a bid to reunite the baby versions of Mario and Luigi. With its striking, colourful graphics and its unique egg-throwing mechanic, Yoshi’s Island is a brilliant platform from the age when Nintendo could do no wrong in that particular genre.

Yet another series that flourished after first appearing on the SNES, Super Metroid’s unusual style of side-scrolling exploration and the incredibly atmospheric feel it achieved through its now iconic score and stylish graphics make it a must-play. It may have influenced hundreds of games since, but sometimes the original is still the best!

The sequel to the famous classic NES game, Super Punch-Out!! offers the same behind the back boxing action. Starring as underdog fighter Little Mac, you must take on a series of opponents, each more larger than life than the last, in a bid to bring home the World Video Boxing Association championship belt.