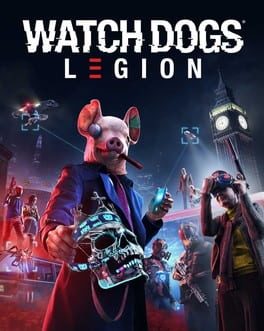 Find the best deals on Watch Dogs Legion for PlayStation 4, Xbox One, PC (Microsoft Windows). We compare 124 deals (starting from £6.57) across every edition offered by our partner retailers.

The third and latest entry into Ubisoft’s tech-focused Watch Dogs series sets you off in a fictionalised version of London; one that has succumbed to acting as an authoritarian state following the repercussions of Brexit. Police drones scour the air, a gruelling surveillance system ensures that nobody steps out of line, and anyone who fights back against the regime is sure to face punishment. Luckily, the rebel hacktivists of DedSec are around to turn things around.

Players don’t only step into the role of just one DedSec recruit, but an entire squad full of members that each boast their own background and skill sets which makes them assets in the war against the surveillance state. Any one of Watch Dog Legion’s thousands of NPCs can be wooed into joining your cause, seeing the game’s narrative to adapt and change around you as necessary – depending on what type of person you choose to play as.

Hack anything, become anyone

As with previous Watch Dog games, the world isn’t just something you move through but a useful tool in your deathly arsenal, too. Road barriers can be raised to prevent cars from chasing after you, hacking cameras will let you snoop on buildings containing your next objective… Watch Dogs Legion gives you a beautifully (if oppressed) rendition of London which you can make your playground. How you do it and who you do it with is entirely up to you!

Watch Dogs Legion doesn’t just gift you with an expansive single-player open-world to roam around in, but a suite of multiplayer modes that will see you connect with other players, too. You’ll be able to join in with up to three other DedSec hacktivists that have been hard at work recruiting, and any skills or experience you gain in these modes successfully translates back into your own game.