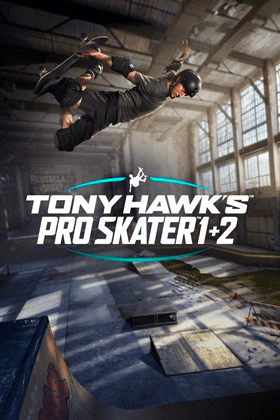 Find the best deals on Tony Hawk's Pro Skater 1 + 2 for PC (Microsoft Windows), PlayStation 4, Xbox One. We compare 97 deals (starting from £9.97) across every edition offered by our partner retailers.

Tony Hawk’s Pro Skater 1+2 marks the second time these games have been made available on the latest platform. But whereas the Tony Hawk’s HD collection released on PS3 and Xbox 360 simply upped the resolution of the original game’s graphics, this time every character, location and skateboard has been developed using entirely new assets. The result is that Tony Hawk’s Pro Skater 1+2 will both look and feel like a modern game – as if it released today.

The Tony Hawk’s series was a cultural phenomenon when it first launched, inspiring a whole generation of players to give skateboarding a go both in real life and the game. The Pro Skater 1+2 collection is taking extra special care to preserve this sense of freedom, faithfully remaking every famous manoeuvre and the thrilling sense of speed fans associate with the series – alongside the original music tracks featured in both games.

Instantly dip in and out both titles on the fly

While Vicarious Visions has confirmed that both remakes will sit separately in this package, they’ve confirmed that it’ll be extremely breezy to bounce between the two. It’s not a case of having to back out of the game entirely to start up the other – there instead will be a lot more synergy between Tony Hawk’s Pro Skater 1 and 2. Progress is tracked across the two games.

Alongside locations and characters, the original soundtrack for both games will be returning for Tony Hawk’s Pro Skater 1 and 2. That’s no small feat when you consider how tumultuous the world of music licensing is. Confirmed artists include the likes of Primus, Rage Against The machine and Goldfinger, all of which will play as you master every grind, kickflip and 180.