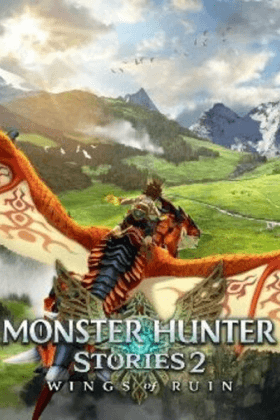 Find the best deals on Monster Hunter Stories 2: Wings of Ruin for Nintendo Switch, PC (Microsoft Windows). We compare 42 deals (starting from £12.74) across every edition offered by our partner retailers.

Having already delighted Nintendo Switch players earlier this year with the exclusive launch of Rise, Capcom’s beast-slaying series is again about to make waves with the arrival of Monster Hunter Stories 2: Wings of Ruin. This is obviously the second spin-off game in the wildly successful franchise, swapping out real-time action for the turn-based gameplay you’d expect to find in traditional JRPGs. It’s Pokémon meets Monster Hunter in the best possible way.

New Monster Hunter Stories players will be pleased to learn that Wings of Ruin weaves an entirely new story separate to that of the original game. You play as a young warrior training to be a legendary rider, setting off on an adventure new friend Ena to protect an ancient Rathalos egg. It’s a colourful adventure that promises to test the bonds of friendship, all in a format that makes Monster Hunter suitable for players of all ages.

Solve the mystery of the missing Rathalos in Monster Hunter Stories 2: Wings of Ruin

Capcom’s cutesier take on Monster Hunter enables you to traverse a range of colourful landscapes, ranging from the frigid region of Loloska all the way up to the lava-filled caverns of Terga. Monster Hunter Stories 2: Wings of Ruin offers up a lot of visual variety in all these various regions, and each one is populated by unique monsters to find and ride.

Monster Hunter Stories 2 builds off of the rock, paper, scissors style of attack system presented in the original, tasking players to attack with power, speed or technicality during head-to-head bouts. Just know going in that speed beats power, technical beats speed and power beats technical. Use this knowledge to your advantage and you’ll be on your way to becoming the ultimate rider.

Ride different monsters to make use of unique actions

Riding one of Wings of Ruin’s many monsters grants your player character with temporary special abilities. Dashing, Flying and Swimming all allow you to traverse this world much quicker, as well as granting you with extra opportunities in turn-based battles. More special abilities will continue to be unlocked the more you befriend creatures by your side.