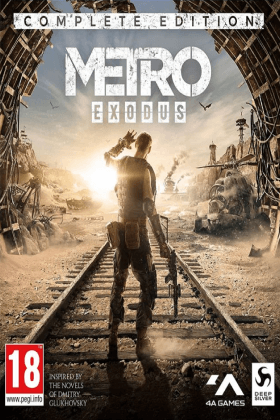 Metro Exodus blends deadly combat and stealth with exploration. Flee the ruins of a dead Moscow and embark on an epic journey for a new life across Russia where you’ll fight to survive against mutants, bandits and changing seasons.

Single-player shooters may be a dime a dozen these days, but one of the best recent examples came at the tail-end of the PS4/Xbox One lifecycle in 2019’s Metro Exodus. This third instalment in Dmitry Glukhovsky's soviet FPS series greatly expanded in scope, letting players explore primarily above ground for the first time while trying to survive against mutants and monsters. The game was a stunner on last-gen consoles, but the new Complete Edition takes this up a notch.

Featuring an improved framerate and fully updated graphics, Metro Exodus: Complete Edition remains exclusive to Xbox Series and PlayStation 5 consoles. The post-apocalypse has never looked better, largely thanks to ray-traced visuals that believably depict how light is able to bounce around the world. Developer 4A Games have always been known for pushing the visual capabilities of tech. This definitive edition of Metro Exodus is yet another example.

Improved visuals and all DLC in Metro Exodus: Complete Edition on Xbox Series X and PS5

As well as being the best way to experience the core Metro Exodus story, the Complete Edition also bundles in both expansions; The Two Colonels and Sam’s Story, which are also now rendered more beautifully than before. All this you get for a markedly lower price than other PlayStation 5 and Xbox Series X games – Metro Exodus: Complete Edition has a standard RRP of just £34.99 at launch.

Showcasing the power of next-gen consoles

Those who already own Metro Exodus on previous platforms will be offered a free upgrade to the Complete Edition (though without the DLC). However, new players will appreciate the 4K-quality visuals and silky 60 fps, both of which work well to immerse you better into this soviet post-apocalypse. The game is a proper next-gen showcase.

Continue the journey with both Metro Exodus expansions

The standard single-player campaign is already a meaty journey, taking the average player 20+ hours to complete. The fun doesn’t stop there, though, as both the Sam’s Story and The Two Colonels DLC campaigns come bundled in for those who pick up the Complete Edition as a physical disc. Both expansions continue the story of Metro outside of protagonist Artyom’s perspective.

Latest News
13 hours ago
0 Comments
What are the different PS4 models?