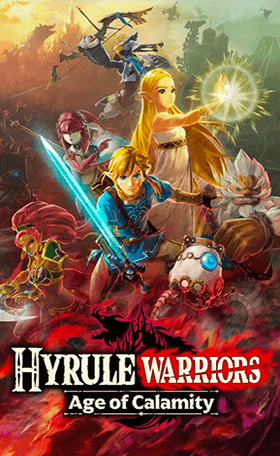 Find the best deals on Hyrule Warriors: Age of Calamity for Nintendo Switch. We compare 16 deals (starting from £34.95) across every edition offered by our partner retailers.

Set 100 years before the events of The Legend of Zelda: Breath of the Wild, during the time when Calamity Ganon was at the absolute height of his destructive power, comes Hyrule Warriors: Age of Calamity. It’s a hack-and-slash action game in the style of Dynasty Warriors but set in the world of The Legend of Zelda, pitting you as Link and all of Hyrule’s champions against legions of enemies.

It follows in the footsteps of 2014’s original Hyrule Warriors game. But whereas that game served as a celebration of the entire The Legend of Zelda saga, Age of Calamity serves as a canonical prequel to one of the most beloved games on Nintendo Switch. If you ever wondered how Breath of the Wild’s version of Hyrule became the desolated land as presented, this action-centric spin-off helps to fill you in.

A fight for the ages comes to Switch in Hyrule Warriors: Age of Calamity

Hyrule Warriors: Age of Calamity marks the first time that a Musso-style game has been made canon within an established Nintendo universe. Fully-voiced cutscenes and a well-thought out story helps bring this satisfying hack-and-slasher to life, as players take on mobs of Mokoblins, Hynoxes and more as a wide roster of their favourite heroes from the Legend of Zelda universe. Confirmed fighters include classic series characters like Link and Zelda, but also relatively new additions like Daruk and Mipha amongst others.

All these heroes come together to tell a story set before the events of The Legend of Zelda: Breath of the Wild, during a time where Calamity Ganon is threating all life within Hyrule Kingdom. Fighting him back involves getting to know each character’s unique abilities and skill sets, managing the battlefield smartly and slashing hordes upon hordes of fiendish enemies. Never before have fights been so fast-paced or aggressive in the Zelda universe. Experience it all on the front line.

Co-operative multiplayer lets you slay together

Much like the original Hyrule Warriors on Wii U, Age of Calamity will allow teams of two to roam the same map together, travelling from point to point in order to decimate waves of enemies together. This you’ll be able to do both locally and online, ensuring that you never have to go it alone when attempting to save this hellscape version of the Hyrule kingdom.

Wield a range of powerful weapons and runes

It’s not just the master sword you’ll be using as a weapon in Hyrule Warriors: Age of Calamity, but a range of other powerful items and magical runes too. All these abilities working in tandem will let you approach each battle scenario differently as more and more different enemy types are introduced. The game also features material crafting which opens up even more layers of gameplay depth.