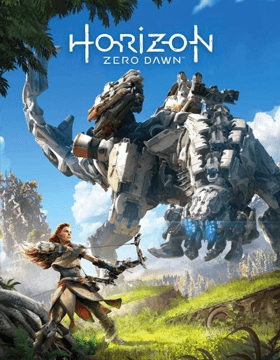 Find the best deals on Horizon: Zero Dawn for PS4. We compare 2 deals (starting from £9.98) across every edition offered by our partner retailers.

Take on the role of Aloy and make use of ranged, melee and stealth tactics in a world overrun by robots. Loot mechanised creatures for resources and explore an open diverse world.

One of the crowning achievements of the open world genre, Horizon: Zero Dawn is one of the most exciting new franchises in years. The Playstation exclusive is set in a distant future in which civilisation as we know it has crumbled and ceased to be, with a combination of nature and towering robot beasts ruling the planet.

You play as Aloy, an intrepid young warrior who must traverse this dangerous landscape with the aid of an arsenal of futuristic weapons that enable her to take on the Machines. Along the way, you’ll aim to uncover the secrets of just what has happened to Earth and her tribe.

Combining truly stunning graphics with an immersive world, hours of intricate story and precise control mechanics that invite you to take on foes in the way that suits your personal style, utilising stealth, brute force or a combination of the two, Horizon: Zero Dawn will be the bar that every game featuring open world RPG exploration released in the near future will be measured against.

Get a feel for the epic quest you’ll be undertaking in Horizon: Zero Dawn.