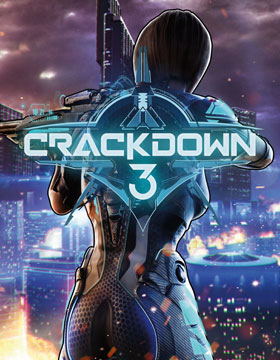 Find the best deals on Crackdown 3 for Xbox One, PC (Microsoft Windows). We compare 14 deals (starting from £0.99) across every edition offered by our partner retailers.

You’re a super-powered Agent of justice. Your mission? To bring order to a world of mayhem and destruction. Use your powerful abilities to smash your enemies to pieces and bring down TerraNova Worldwide.

Crackdown 3 is set in an open world of mayhem and destruction. A seedy world where crime pays and the good live in constant fear. Operating out of the light, Agents use their powers to bring order to it all. But crime is out of control and psychopaths, gangsters and butchers rule the roost. Change is needed.

TerraNova Worldwide is behind the worst of it. A shadowy and brutal organisation, they are exploiting every resource on the island of New Providence. They butcher those who dare get in their way – even children. As Commander Jaxon, your role is simple: smash up the powers that be. Trouble is, you’re fighting against a criminal empire.

Good job you’re a genetically modified superhuman then. As you explore the heights of a futuristic city and navigate the treacherous, dilapidated outskirts of New Providence, you’ll step up and fight your way to glory like a boss.

Level up your Agent to unlock new skills and level the playing field as you battle gun, knife, bat and any-ridiculous-weapon-wielding foes. Run as fast as lightning, jump over skyscrapers and throw trucks at your enemies. Use an arsenal of weapons and equipment to attack strongholds and eliminate bosses. Lure crime lords out of hiding by breaking up their operation and take them out to bring order to the streets.

Play the incredible campaign solo or team up with your mates in co-op mode. A new multiplayer mode called “Wrecking Zone” throws you into a world where two teams of five battle for interagency. Maximum destruction is standard.

In this neon-filled, open world, it’s kill or be killed. TerraNova Worldwide must be taken down. Your mission: liberate New Providence and bring TerraNova’s leaders to justice. It’s time to step up your boom. Are you up to it?