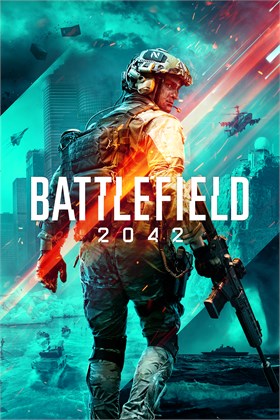 Find the best deals on Battlefield 2042 for PlayStation 5, PC (Microsoft Windows), PlayStation 4, Xbox Series X, Xbox One. We compare 155 deals (starting from £0.01) across every edition offered by our partner retailers.

Battlefield 2042 marks the return to the iconic all-out warfare of the franchise. Adapt and overcome dynamically-changing battlegrounds with the help of your squad and a cutting-edge arsenal. With support for 128 players*, prepare for unprecedented scale on vast environments. Take on massive experiences, from updated multiplayer modes like Conquest and Breakthrough to the all-new Hazard Zone.

It’s been a hot minute since players have enjoyed the destructive spectacle of Battlefield game. That’s soon about to change, though, as DICE’s trademark first-person shooter travels to the near future for an all-new entry releasing on last- and current-gen consoles. Battlefield 2042 sees the return of all-out warfare, challenging players from saving a future world from imminent disaster in explosive squad-based gameplay.

Battlefield 2042 marks the very first time DICE and EA’s series has travelled to the future, having previously allowed players to fight in the trenches of WWI, WWII and present day. 2042 is a year full of disorder, however, forcing you to utilise a cutting-edge arsenal of incredibly inventive weaponry as part of epic 128-player battles. All this is made possible while still accounting for Battlefield’s iconic destructive environments.

Whereas some of the more recent Battlefield games have offered single-player stories as part of the package, Battlefield 2042 will purely be focussing only on multiplayer. It’s somewhat expected considering how ambitious it’s said to be, as popular modes like Conquest and Breakout return but this time on a much larger scale. 128 players at once can compete in individual squads.

Hazard Zone makes its grand debut in Battlefield 2042 as a never-before-seen multiplayer mode. Not too much is known about how it will differ from other modes just yet, but DICE has confirmed that it’ll heavily be based around squads. “Squad up and drop down” is the specific language being used – but it’s been confirmed to not be a battle royale.

Dynamic maps that are destructive and evolving

Battlefield’s multiplayer is famous for having maps that change and adapt the more events proceed on. This element will again be placed at the forefront of 2042, where on-the-fly dynamic events like Tornadoes and lighting storms can come in and drastically affect your chances of winning. It’s up to you deploy your arsenal cleverly in these instances.