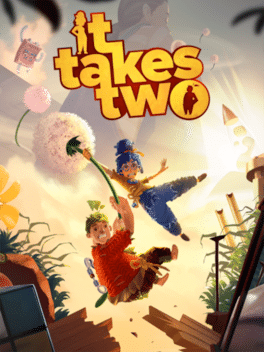 Find the best deals on It Takes Two for PC (Microsoft Windows), PlayStation 4, Xbox One. We compare 51 deals (starting from £12.41) across every edition offered by our partner retailers.

Bring your favorite co-op partner and together step into the shoes of May and Cody. As the couple is going through a divorce, through unknown means their minds are transported into two dolls which their daughter, Rose, made to represent them. Now they must reluctantly find a way to get back into their bodies, a quest which takes them through the most wild, unexpected and fantastical journey imaginable.

It Takes Two is the new co-operative adventure game from the team behind A Way Out and Brothers: A Tale of Two Sons. It centres on two lifelong friends, Cody and May, who must embark on a crazy journey that has been specifically built for the two-player setup, either online or locally. Set within a colourful and magical universe, both characters have been transformed into dolls and are on a quest to break this magic spell.

A huge variety of objective-based challenges and gameplay puzzles stand between Cody and May and their aim to be returned back to normal. All of it is rendered in seamless split-screen co-op that always remains, tasking dedicated teams of two to master the genre-bending obstacles laid before them. It Takes Two will test your relationship as part of a fantastical tale.

Work together when It Takes Two releases on PS4, PS5, Xbox and PC

It Takes Two is set to release on both current- and last-gen consoles later this year, letting co-op preferring duos present across platforms embark on a whimsical journey like no other. You’ll meet a diverse cast of interesting and endearing characters along the way, all of which usher you into a unique blend of interactive storytelling and genre-mashing gameplay. It Takes Two is set to prove that two heads really are better than one.

It’s extremely rare for video games to present themes like parenthood and especially divorce, but It Takes Two tackles them head on as part of a fun and whimsical co-op 3D platformer. You and a friend (either online or locally) are thrust together within a sweeping adventure full of diverse locations and interesting puzzle design. Only by working together as a team can you succeed, break the curse and grow back to normal form.

Just one copy of the game required

Much like how developer Hazelight handled the release of A Way Out and Brothers, It Takes Two will only require one person to purchase the game thanks to the Friend’s Pass feature. This means anyone who picks up the game will be able to invite a friend to get on in the adventure for free. It Takes Two is a great value proposition when it comes to co-op games.

Where storytelling and gameplay collide

It Takes Two is all about working through problems together, but at the heart of this co-operative adventure is a heartfelt story. Transformed into doll versions of their parents and warped to a fantasy world, only by proving Dr. Hakim wrong and repairing Cody and May’s fractured relationship will the pair be successful.