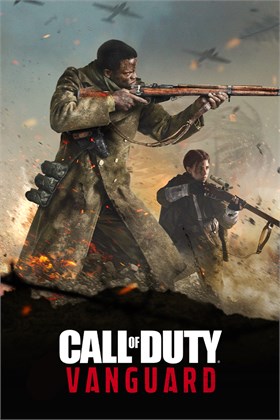 Find the best deals on Call of Duty: Vanguard for Xbox, Xbox Series X, PlayStation 5, PC (Microsoft Windows), PlayStation 4. We compare 150 deals (starting from £29.27) across every edition offered by our partner retailers.

This is WWII combat like never before. Witness the origins of Special Forces as you play a pivotal role and change the face of history, forming Task Force One in a gripping Campaign across four major theatres of war. Become an original Special Forces Operator in an online Multiplayer rich in innovation with 20 maps available at launch. Prepare for a franchise-first, universe-expanding Zombies crossover. Immerse yourself in a fully integrated Call of Duty®: Warzone™ experience featuring a new and massive map. This is the most connected Call of Duty ever, all powered by the next generation Call of Duty® engine introduced in Modern Warfare.

Regular as clockwork, 2021 will see a new Call of Duty instalment arrive on PlayStation and Xbox consoles. This time its Sledgehammer Games’ time to deliver, and they look to be doing so in Call of Duty: Vanguard. It’s a pseudo-sequel to 2017’s Call of Duty: WWII that tells a globetrotting journey taking place during the midst of the Second World War. Tight first-person gunplay and blockbuster action combine as Call of Duty: Vanguard asks you to rise on every front.

Call of Duty: Vanguard’s single-player offering will set you behind the eyes of multiple characters, seeing you fight everywhere from the Pacific, Eastern and Western Fronts, as well as the North African campaign against the fascists. The traditional multiplayer suite and co-operative Zombies mode also make a return, bringing with them a new degree of destructive environments and material degradation to let players feel every blow, shot and explosion.

World War II combat gets an upgrade in Call of Duty: Vanguard on November 5th

You might think you already have some idea about how combat will work in the WWII setting. However, Activision and Sledgehammer Games have aimed to bring a new dynamism to the setting’s brand of trench warfare. Vanguard does this by centring on the origins of Special Forces, letting you duke it out against enemy forces against four different major theatres of war.

Much like what happened with Black Ops Cold War and the recent Modern Warfare reboot, Call of Duty: Vanguard will tout a Battle Pass system to keep players engaged. This will consist of various seasons rolled out throughout the year, during which a specific collection of weapons and cosmetics will be made available to earn. Plus, limited-time WWII events are set to take place within Call of Duty: Warzone.

Can’t wait to get started in Call of Duty: Vanguard? Sledgehammer Games is giving those willing to pre-order that chance. A taste of the game’s multiplayer is planned for later on this September via a beta. Plus, anyone who pre-orders to enter this will also get some goods for use in Black Ops Cold War and Warzone, such as the Night Raid Mastercraft gun and a Frontline Weapons Pack.